I like to head out to California for short trips, and San Francisco is one of the best places to start a journey. There are so many different things to be viewed in the area. There are a number of waterfalls in the area, but they’re spread out in all different directions. (Check out Mountain View Falls, Alamere Falls, and McWay Falls as examples.) In Big Basin Redwood State Park south of San Francisco, there are a few waterfalls that require significant hikes to arrive at (Berry Creek Falls and Silver Falls). I didn’t hike to those falls since I had no wish to go that far. So instead I hiked to Sempervirens Falls.

I tend to get a late start (not a morning person), so when I arrived at Big Basin SP, parking was at a minimum for a beautiful Saturday in April. Parking is found along Escape Road, and I kept driving. The cars were parked alongside, so I just kept going. I found ample parking at the end of Escape Road, and realized that it would be easier to take a completely different path than I had originally planned.

At the end of Escape Road, I headed north past the fence where Escape Road officially “ends”, though it continues as a walking path. After a few hundred feet, I took a sharp right onto the Sequoia Trail. I continued along this path, crossing CA-236. The Sequoia Trail continues downhill to the falls (which are to your right as your reach Sky Meadow Road. The most difficult portion of the hike is the uphill climb on the return.

I’m not sure I’d go out of my way to see Sempervirens Falls, though the surrounding redwoods make up for the smaller than expected waterfall. It’s at most 20′ tall, and is rather narrow. Still, enjoy the scenery!

Where in the World is Sempervirens Falls?: map 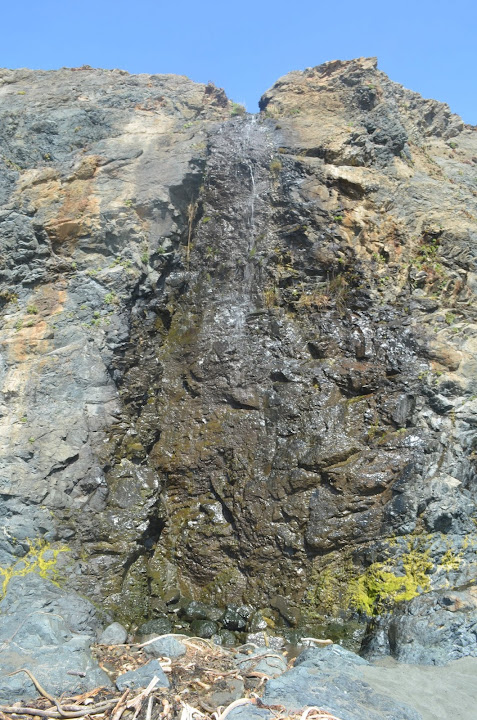 One of the Black Point Beach waterfalls (May 2013)

I love to find waterfalls that are along shoreline, and California has a few very impressive examples, including Alamere Falls and McWay Falls. Both of those are south of San Francisco. If you head north along California 1, you’ll a few other less impressive waterfalls along the California shoreline (and maybe one or two others that are more interesting).

The beach and cliffs around Black Point Beach are stunning, I will admit that! But the waterfalls there are usually trickles, at best. I’m not sure that many people will go out of their way to find these two, though they do exist. I can imagine after an impressive rainfall that they might just perk up a bit, but otherwise, you’re better off searching for other waterfalls and activities in the region. (Stornetta Falls, another possibly more intriguing waterfall further north, was essentially dry during my late May 2013 visit, which suggests your best bet is much earlier in the year.)

Directions:
1) While driving along CA-1 heading north, you’ll pass through Salt Point State Park. Continue along CA-1 for 7 miles or so.
2) Pay attention, because on the left, you’ll come upon a gravel parking area for Black Point Beach. Park here. (There may be a fee.)
3) From this parking area, follow the trails somewhat northwest toward the shoreline. At the cliff’s edge, you should find a stairway down to the beach. I wasn’t a big fan of this (don’t like heights), but bucked up and headed down.
4) Once on the beach, head to the right (north). You may find two or three falls along the beach, depending on the recent rainfall levels.

Where in the World is Black Point Beach Falls?: map 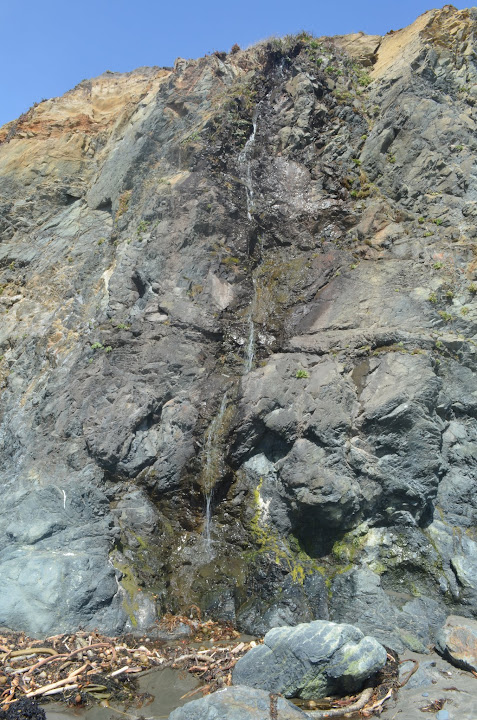 Just a few hundred feet above Alamere Falls are three other extremely beautiful drops as Alamere Creek travels toward the Pacific Ocean. While not as tall as the final drop, these two are just as photogenic and actually easier to view closeup, especially if you don’t want to make the tricky trek down to the shore.

Even reaching the upper falls is still a task. As you’re approaching the upper falls, you’ll be standing 30 or 40 feet above them at one point, and you’ll have to negotiate your way down the slippery but well worn paths leading to the upper falls. It’s not too bad, though it can seem daunting at first. You are likely to get dirty as you scramble down, and you will want to cover your camera well in order to avoid any damage. It was one of the muddiest treks I’ve ever taken.

The middle drop of Alamere Falls

Where in the World is Upper Alamere Falls?

Alamere Falls is one of those visual feasts that you’ll remember forever. Alamere Falls is found on Alamere Creek, which drops 40 feet into the vast Pacific Ocean. I’m a big fan of waterfalls that flow into oceans and lakes, so this was a great find.

First off, the hike is not simple, though it is also not terrible. It’s an 8.8 mile round trip hike, so beware. The hike is up or down, though the trail is surprisingly even. There aren’t many random rocks to make the hike more difficult.

Second, from what I have read, this fall (and a few others in the area) only flow in winter and spring during the rainy season. I visited three days ago, and it was flowing, so December is a pretty good time to visit, and the temperature was very pleasant.

Finally, the final “ascent” to the crest requires a caution. You have to maneuver down some slippery talus. You’ll need both hands available. Once at the crest, further exploration will reveal that you can get down to the base, though it’s not very obvious at first. I didn’t look as scary as I had thought, but I decided to err on the side of caution, since I was alone at the time. Still, it’s not an easy climb down to the base.

Where in the World is Alamere Falls?