I’ve had the chance to visit Mingo Falls twice, once in late April 2013 and then just a few weeks ago in early March 2017. I hadn’t looked at the two pictures side by until just recently, and realized Mingo Falls could present very different personalities depending on the time of year.

Let’s start by stating: Mingo Falls is a fun waterfall to visit. It’s right at the edge of the Great Smoky Mountains National Park, and is a few minutes drive from Cherokee (which is a town I could visit pretty frequently, especially in non-peak season). The first time I visited, I made sure to see Mingo Falls. The second visit, I had time to kill before the sunset, and figured I should go and see Mingo Falls again.  I’m glad I did.

In late April, the leaves on the trees were emerging and so they covered up part of the falls. That wasn’t a problem in early March! What’s also striking is the amount of water flowing over the falls. After doing a bit of research, I found that this year (2017) has been a rather dry year in the Great Smoky Mountains region. Many of the falls were not as intense as I expected. As you can see, much more water was flowing in late April of 2013 than this year. (Usually, as the spring progresses toward summer, the opposite holds true.)

One issue with writing about waterfalls sometime after I visit them is I don’t always remember the fine details. When I arrived this year, I was surprised to find steps leading up most of the way to the falls. I don’t exactly remember that the last time, but it was four years ago…It is a short hike, but it is also consistently uphill. You’ll get a bit of exercise. I probably went a bit too fast on the way up, as I could feel the burn.

Accessibility: 7/10 (easy/moderate, this would be fine for kids, it’s just almost all uphill with stairs)
Height: 120′
Length of Hike: 0.8 miles round-trip

Where in the World is Mingo Falls? 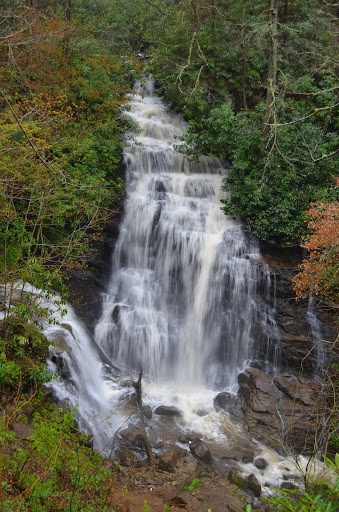 I didn’t have very high expectations for Soco Falls. I was using the book “North Carolina Waterfalls” by Kevin Adams to find waterfall candidates. In 2005, he did not have anything particularly good to say about the falls. It is different now! And I think it’s possible that his comments could have spurred the changes (or the changes were already in motion). Either way, it’s definitely a good thing!

The most difficult part is finding the falls. Even that has somewhat improved. There are now signs in both directions, approximately 0.5 miles before the falls. If headed west along US-19, though, it is extremely easy to miss the parking area, even after seeing the sign indicating the distance. There is now a sign at the parking area but it cannot be seen coming from that direction. The sign for the parking area can be seen if headed east (from Cherokee). It was difficult to turn around, but I did, and it was worth it.

The hike to the falls is simple. The trail starts at a split between two metal barriers. It heads downhill pretty quickly, but is very manageable. There are rocks strategically placed to help with footing. After a tenth of a mile or so (if that), you’ll reach the wood boardwalk, which leads to a great view of the falls. The trail to the base of the falls was blocked with yellow rope, so I didn’t proceed to the base of the falls. This is a very beautiful waterfall, and it just so happened to be raining today. The falls were impressive! (They also seem to be cleaner now.)

Where in the World is Soco Falls?