Being a geographically-oriented person, I can’t really remember exactly where Hardy-Reagan Falls was. Looking it up online, I do seem to remember that it was a short hike to the falls, but my mind can’t place it in relation to other falls in the area. I do remember that Waterloo Falls is relatively nearby. (Interesting note: Google seems to call this Cleek Branch Falls.)

As for the falls themselves, I don’t really remember spending a whole of time there. The falls are not that large, only about 5′ tall (maybe a little more). What I do like about the falls is the rock cliffs around the falls. There is a very layered effect that comes from the rocks. It adds a certain dimensionality to an otherwise not-very-exciting waterfall. 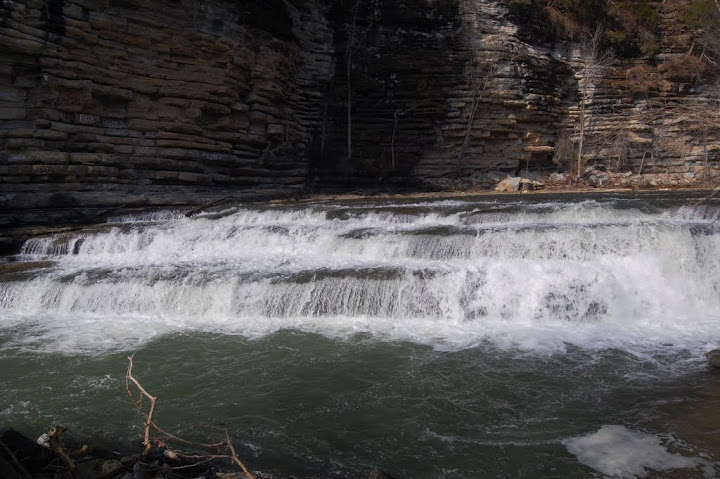 Where in the World is Hardy-Reagan Falls?

When I visited Tennessee in December 2009, I ended up driving around a considerable amount of the central portion of the state. Some counties and areas have a considerable number of waterfalls within a short distance of each other. That is not the case for Waterloo Falls, with only Cummins Falls and the smaller Hardy-Reagan Falls and being relatively nearby.

I hadn’t actually even planned on visiting Waterloo Falls.  I intended to visit Cummins Falls, only to drive by and realize that there was no place to park. I later learned a very sad tragedy had occurred at the falls, and the area was now blocked off. (As of 2017, Cummins Falls has a designated state park.) I ended up driving about 9 miles to find Waterloo Falls instead. It’s not extremely tall or extremely wide. It’s almost right in the middle. What I love about this falls is its photogenic nature. Without much difficulty, I was able to achieve a really spectacular cascading effect. I think that was just pure luck, but if you look at the right portion of the picture, you’ll even notice I was able to capture a rainbow formed by the mist from the falls. I just love the way this waterfall looks.

Where in the World is Waterloo Falls?