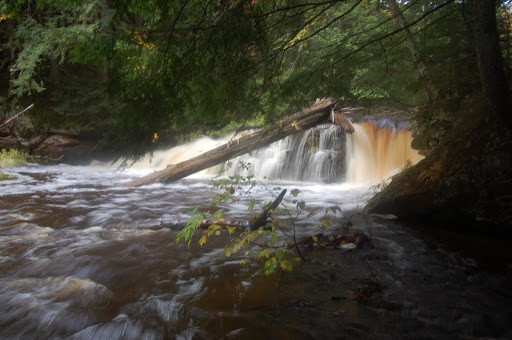 Let me say, though, that I’m not sure that I would be able to find the “4th” lower falls again. The first three were found by random chance after at least following what looked like a trail. After the first three falls, though, we really started wandering. The terrain around the West Branch of the Sturgeon is not exactly even, and so after climbing up and down hills and around trees, we stumbled upon the 4th falls. I distinctly remember climbing/sliding down a steeper slope to get a better view of this falls, only to find out there was a lot of vegetation near the river, making that a more difficult task than expected. It was an adventure, to say the least.

Where in the World is West Branch Sturgeon Falls #4?

On my trip to the western Upper Peninsula last weekend to enjoy the fall colors, I decided to take a detour to see Hogger Falls. Once finding what seemed to be the right area to head to the falls, we started on our journey. Well, I’m not sure that we ever found our original goal, Hogger Falls. The trail turnoff that supposedly led to the falls wasn’t very apparent. I did find a side trail early on that didn’t seem to lead to anything except a really random tree that had been clearly cut down into a weird shape.

I felt that we had walked too far to see Hogger Falls, but I had read that there were three smaller falls further down the trail. The book that I was using suggested that you drive down the road that follows the West Branch Sturgeon River, but the road was blocked by a gate. Which was probably a good thing, since the road was very uneven and full of water from recent rains. We found the trail that led to the lower falls. None of the falls are particularly large, but they were pretty nonetheless.  The third falls that we saw upstream was only about 3 feet tall. Since there was a considerable rainfall in the past few weeks, there was likely more water than normal.

Where in the World is West Branch Sturgeon Falls #3?