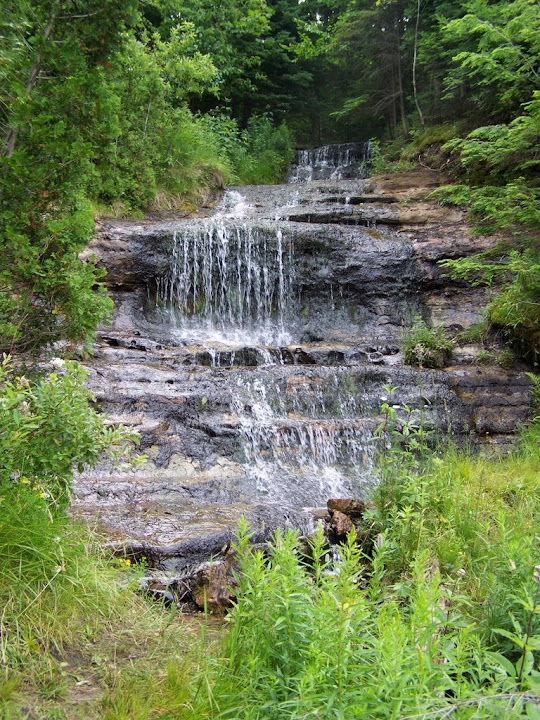 Alger Falls is by no means the tallest, widest, or most impressive waterfall in the state (or even county, for that matter). Photographing it can even be difficult because the sun seems to like to play games with the falls.

And yet the reason that the sun plays games is also likely the reason that I’ve seen it so many times. It’s wildly easy to visit. It is a roadside waterfall, just a hundred feet or so from M-28. This is not some back highway with very few cars. This is the main road leading into Munising. At certain times of the year you might not see many cars, and yet during the summer, it’s crawling with people. And if you’re heading into Munising, there’s a pretty high probability you’ll be passing Alger Falls.

The falls are off at an angle, so the first time, there was some hesitation about where to park. Pull off, and you’ll be OK. There’s a sign indicating you’re at the right place. After the first visit, it becomes much less difficult to recognize where the falls are. I think I’ve shown the falls to nearly every person I’ve visited the Upper Peninsula with. Oh, and another benefit…Wagner Falls is less than a quarter of a mile away, and Horseshoe Falls, Tannery Falls, Memorial Falls, and Munising Falls are within a few miles. If you don’t mind expanding the radius further, there are at least 20 relatively easy-to-visit falls in Alger County alone. 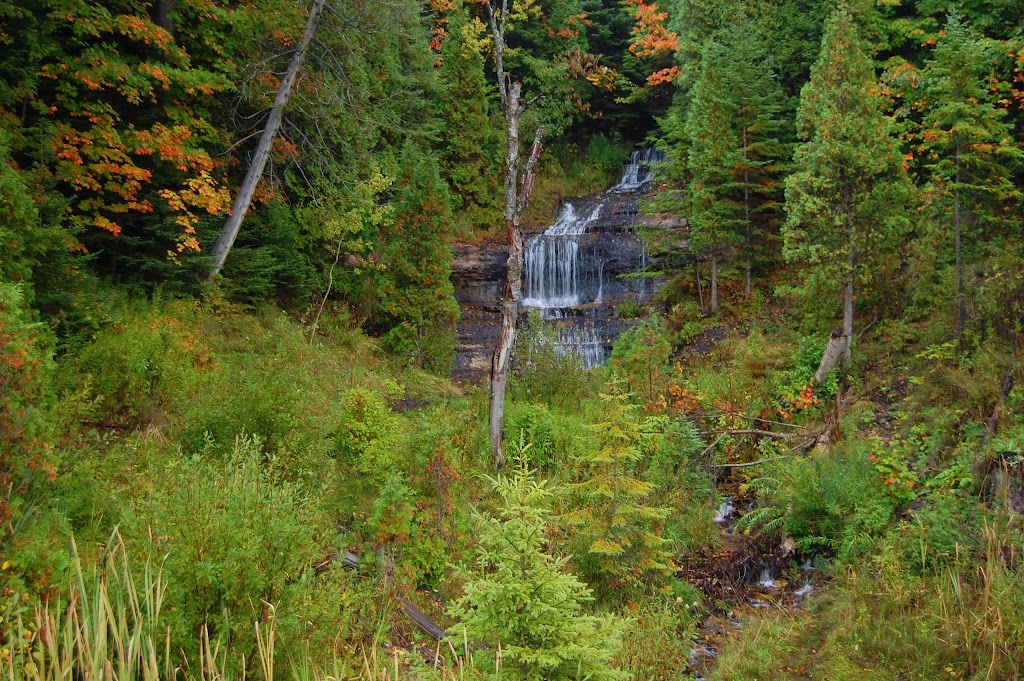 Where in the World is Alger Falls?

I visited Horseshoe Falls over three years ago, and so some of the details seem a little bit fuzzy.  And yet there’s one thing I do seem to remember…these falls seem very remote.  Maybe not the remotest set of falls I’ve ever driven too, but there is a lot of dirt road driving involved to see the falls.  Luckily these back roads in good enough condition, and wide enough too, that I really didn’t have to many worries.  It just seems like it takes a while to get to the falls.

Horseshoe Falls is not too far south from Eight-Foot Falls, Twelve-Foot Falls, and Eighteen-Foot Falls, all of which don’t seem nearly as tall as suggested.  Horseshoe Falls is not particularly tall, maybe 3-4′.  And yet at least it does have a general horseshoe shape, at least if you use imagination!  I’m not sure I would spend any significant time going to visit just this waterfall, but since it’s in the same vicinity as the three other falls, it’s not a bad choice…And it does seem to be just a little bit more peaceful and private than the other falls. 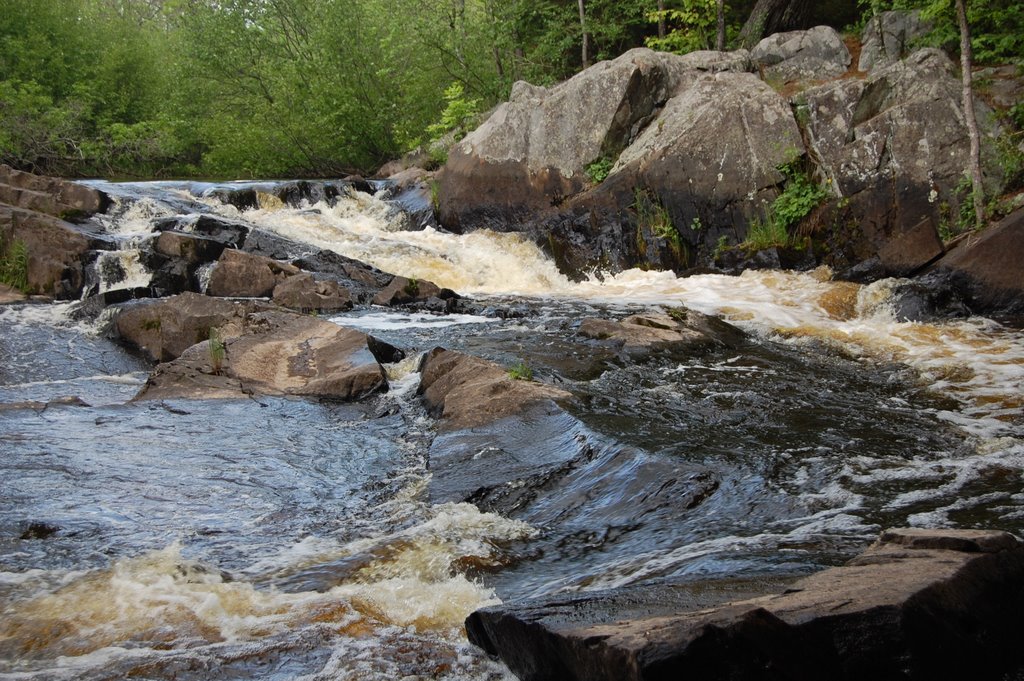 Where in the World is Horseshoe Falls?

Horseshoe Falls is rather complicated. It’s shared between New York and Ontario, and can be better seen on the Canadian side. We viewed the falls from the American side, which I think leads to a more impeded view. If you want an even better viewpoint of the falls, you could try the Lady of the Mist boat, though that definitely costs a considerable amount. You’ll definitely be experiencing the falls, though!

Horseshoe Falls is beautiful, but it suffers from man-made effects. Because of the dam that cut off half of the falls, this leads to a very misty effect around the falls, making it rather difficult to see the falls from afar. Your view is blocked by a whole bunch of small, tiny water droplets conspiring to lessen the attraction. Oh well, it’s still amazing the amount of water flowing over the falls.

July 2015 Update: I had the chance to view the falls from the Canadian side, and I believe that there are honestly better views to be had on this side (for American Falls and Bridalveil Falls also). It’s just positioned better to see all three falls. I have to say visiting both sides is interesting because you get such different vantage points. I also had the chance to take a falls cruise, and this added another view to the falls. One thing about the Ontario side: it’s extremely commercialized…

Directions:
There are probably only a gazillion ways to get to the falls, so I am going to include this link that provides directions to the falls from multiple different directions.

If you want to view the falls from the Canadian side, and you are American, don’t forget that as of 2009, you need a passport, passport card, or an enhanced driver’s license.

Accessibility: 10/10 (easy)
Height: 167′
Length of Hike: varies depending on location

Horseshoe Falls in July 2006 (from the American side)

Horseshoe Falls from the Canadian side in July 2015

Where in the Word is Horseshoe Falls?

While not a large waterfall, or even one with a lot of flow, Horseshoe Falls is interesting because of its shape – the middle section has a horseshoe shape! The waterfall, which is on private property but accessible to the public for a fee, is interesting enough that you should stop and see it at least once. It’s also in the immediate vicinity of at least five other waterfalls.

As I said, there is a fee to see the Falls. I paid $5 by myself, or there is a family option for $15. While it does cost something, the area around the falls is very well protected and in great condition. There’s no trash around the falls or anything to detract from its beauty. Along the way to the falls, you will pass by some beautiful wildflowers, which the owners have identified. During July, pay attention for some rather inconspicuous native orchids that pop up along the trail. You can also feed the ducks and trout, which eat the food insanely fast.

Where in the World is Horseshoe Falls?