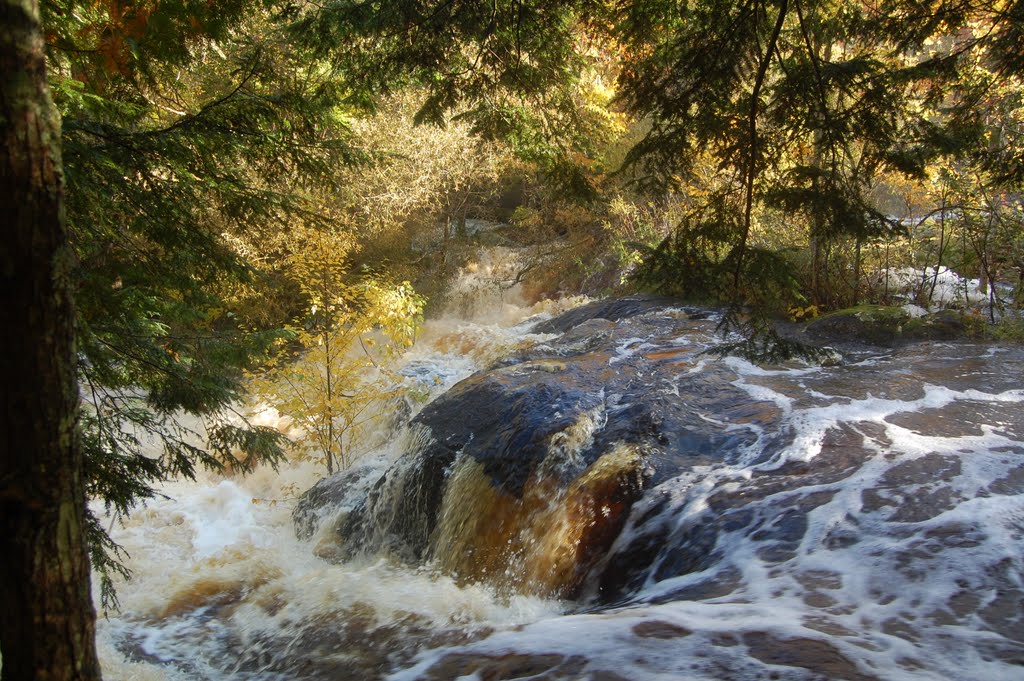 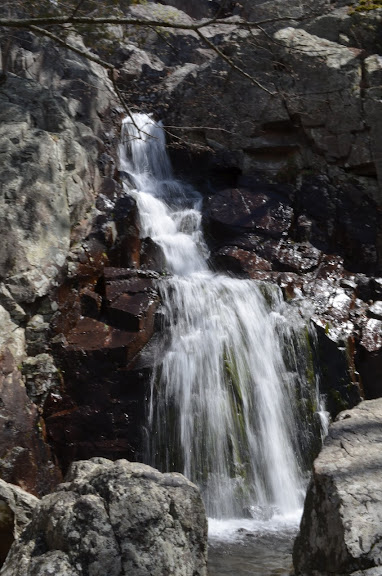 The lower portion of Mina Sauk Falls in April 2013

Mina Sauk Falls is in Taum Sauk Mountain State Park, which is about two hours or so from St. Louis. As a side note, the equally interesting Elephant Rocks State Park is nearby. Both parks can be easily visited in the same day. As you drive along the winding, mostly paved road to the falls, you end up at the top of Taum Sauk Mountain. The hike to the falls is actually downhill on the way there.

The hike isn’t particularly long, and it is easy on the way down (for the most part). It is difficult to view the whole falls at the same time, and it does require some effort to see the bottom portion. The upper portion requires less effort. On the way back up, you are now hiking consistently uphill. Luckily, the elevation gain is spread out over enough a distance that it doesn’t even remotely rank as one of the most difficult hikes.

From what I’ve read, the falls seem to be diminished in volume later in the year, so the best time to visit is in spring as any snow will have recently melted. When I visited in mid-April, the falls were definitely at a nice level of flow.

Accessibility: 4/10 (moderate/strenuous, this is not meant for someone that has just had surgery…kids will likely be ok)
Height: 132′
Length of Hike: 3 miles round-trip 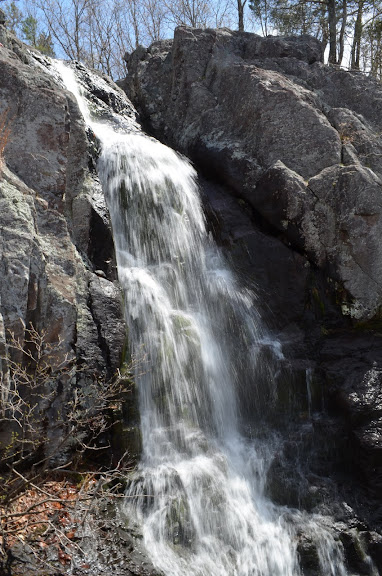 Where in the World is Mina Sauk Falls? 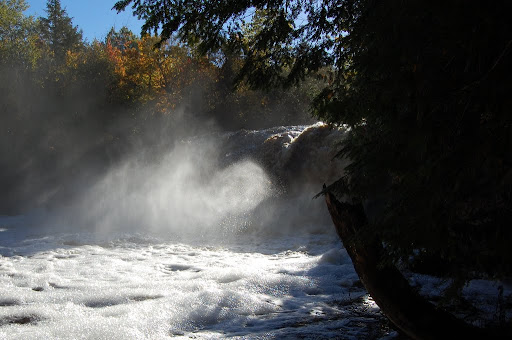 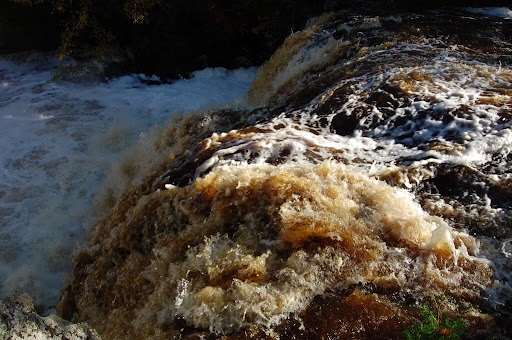 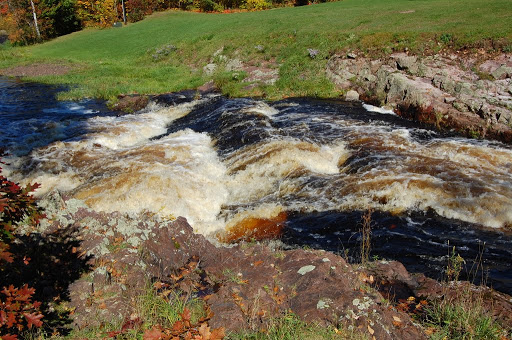 I have a special relationship with Lower Potato River Falls. After pulling into the parking area, I headed toward Lower Potato River Falls. As I’m heading down the stairs, through the trees you can get a glimpse of the falls, but it’s really not that good of a view. Trees are blocking parts of the falls, and so I’m hoping that since the stairs lead further downward that I’ll be treated to a better view.

I get to the bottom of the stairs, and what I’m greeted with is a river…there’s no view of the falls to be seen, though I know they’re right around the bend! I wander along what I think is the east side of the river for some time, hoping that maybe that will lead to a better view…But, wow, the rock cliffs on that side of the river are surprisingly steep. I slowly realize that the only way I’m going to get a very good view is to actually cross the river.

Now while I like waterfalls, I’m not a big fan of getting wet. That probably seems very odd…loving waterfalls but not wanting to get wet. If the river were very shallow, I’d try and cross in an instant. But this river appears to be rather uneven in depth. It’s still rather shallow, but there’s essentially NO WAY I’m going to avoid soaking some part of my body, and I’m wearing jeans too. Not sure what’s crawling down below in the river, I decide to leave my socks on…again, very weird. I guess I just feel more comfortable with something between my feet and the riverbed. I take the first jump into the river, and it’s not as easy as it seems to cross. Big rocks shift, so it can be hard to get a firm stance…but I push forward, and after a few seconds, I’ve crossed the 20 foot wide river. I put my shoes back on and start wandering along the less steep western shore. As I turn the corner of the bend that’s blocking the view, my effort is rewarded with a truly beautiful scene. Lower Potato River Falls automatically becomes one of my favorite falls in Wisconsin. It’s a wide waterfall, and at the point I’m standing at, it’s reflection is being revealed in the water. It’s an amazing scene…Now I’ve just got to get back across the river. Upper Potato River Falls is just upstream.

Where in the World is Lower Potato River Falls?

I don’t have many favorites. Each waterfalls is unique, and so I often find it hard to classify waterfalls, or other things in general, as favorites. But Superior Falls is definitely one of my favorite waterfalls.

I don’t know if it’s the location or the scenery, but this waterfall is just so intriguing to me. It is found on the Montreal River, which is natural border between Michigan and Wisconsin. The waterfall is viewed from the Michigan side, though it is best accessed by traveling through Wisconsin. It is aptly named, considering that is just hundreds of yards away from Lake Superior. Once you get to the viewing area, you are greeted by a rather tall waterfall. The view is just great, especially considering that most waterfalls don’t look spectacular from above…but this one does. It could be cliffs surrounding the falls that just add even more character and charm.

You can explore the area around the falls, and there are two or three smaller drops upstream that can be viewed close-up. The area around the falls is EXTREMELY steep, but somebody used some logic and put up tall metal fencing that allows for much safer access to the upper areas of the falls. There are signs still indicating you need to be careful, especially in case of the unexpected flash flood.

Update: When I initially visited in August 2008, the waterfall was at relatively low flow, which allowed visitors to see the underlying bedrock.  I then visited Superior Falls on September 26, 2010.  This was after what was a CONSIDERABLE amount of rainfall in the western Upper Peninsula, which led to a considerably different view, as seen below…

Where in the World is Superior Falls?

There are multiple drops on the Potato River in Wisconsin. The drops may not really end, meaning either there is one very long waterfall or many small waterfalls. However you interpret that, you really only get two different viewpoints, which is why I say there is only Upper and Lower Potato River Falls.

The Upper Potato River Falls can be easily viewed from a trail that leads to an overlook of the falls. I am not sure whether you can view the falls from the base. There was no clear trail down to the base, and the rock is rather steep in places. There was a faint trail that may lead somewhere, but I didn’t follow that lead.

The view from the overlook shows three separate drops. The drops are larger than they appear, though it’s deceiving in the picture since I’m looking at them from afar. The area is very beautiful, as is the waterfall. It’s just too bad there’s no easy way to get closer to it.

Where in the World is Upper Potato River Falls?

Saxon Falls is an intriguing waterfall. First, the waterfall is on the Michigan/Wisconsin border on the Montreal River. I viewed it from the Wisconsin side, but it may be easier to view it from Michigan. Second, I’m curious what the whole waterfall looks like. The bottom portion is hidden from view by trees. If it could be seen in it’s entirety, it would probably be surprising, since I’m guessing there’s an unseen 50+ foot drop.

The hike to the falls from the power dam is short, but does climb over some steep terrain. Be careful! There might be a way to view the whole falls, but I’m guessing that it would involve some steep cliffs and may even be illegal.

Where in the World is Saxon Falls?