I’m honestly a bit torn about what to say about Ho’opi’i Falls. It’s a bit confusing about whether you can access the falls or not, though recent searches seem to indicate that many people are still visiting the falls. So why the confusion?

Searches for Ho’opi’i Falls are unclear about whether falls are on private property or owned by the state. (An article about the closure no longer exists…) If anyone definitively knows more, feel free to leave a comment. I know that when I visited in 2015, it was a bit confusing about where to start the hike. I was following a guidebook (that is known to lead people to places they shouldn’t necessarily be), and it mentioned a fence. Well, the start of the hike, was not at the obvious fence, but a less obvious set of metal posts. I think what has happened is that many people were starting at the wrong place and crossing private property. There are some interesting comments if you look around online.

So it seems that as long as you stay on a designated trail, there aren’t any major issues. Follow any signs and closures. If open, you’ll find two separate waterfalls. I’ve decided to post both of them here instead of creating unique entries. The first falls upstream was very busy and a number of locals were jumping off the falls. It made a bit hard to capture the falls without someone in the way. The second falls downstream required a bit of downhill hiking, but was more isolated. (Jumping there would have caused serious injury.) Both drops are scenic in their own ways. 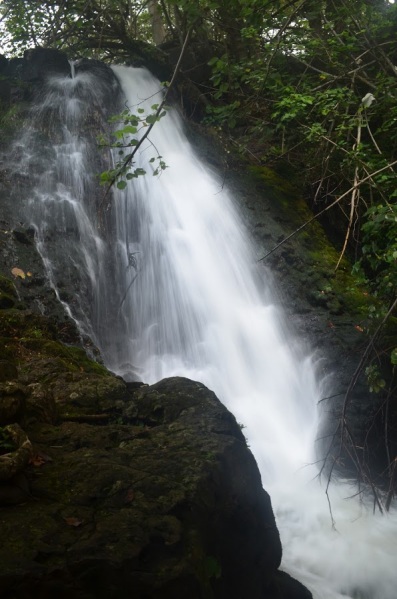 Where in the World is Ho’opi’i Falls?

I was driving along Kauai’s northern shore hoping I might be able to find some waterfalls. One of the books I was using mentions a few different falls, but I honestly couldn’t find any safe way to stop at most of them. I knew that Queen’s Bath Falls existed, and so I decided to search for that instead (since it seemed to be an easier stop than some other falls).

After driving and finding the parking area (which was almost full, even on this moderately rainy day), I set off to to the falls. I found the hike to be very enjoyable. Along the way, you pass by a few other drops along the creek that turns into Queen’s Bath Falls. Once you arrive at the falls, it is really a beautiful view. The falls are headed into the Pacific Ocean, though it doesn’t look like it because there’s a cove of sorts that the water falls into. You get an awesome view of the ocean, the shoreline, and the falls. When I visited, there were a number of turtles in that cove, and it was awesome to watch them.

As you approach the ocean, I would suggest being cautious and careful. I didn’t find it to be particularly dangerous, but I could see how not being careful could lead to some issues. At the right time, it appears you can swim/bathe in the pool that’s formed near the falls. When I was there, the waves would have made that wildly impossible to do, so I didn’t even think twice about it. Be careful!

Accessibility: 7/10 (easy/moderate)
Distance of Hike: 0.6 miles round-trip
Height: ~15′ per drop (would depend on tides)

Where in the World is Queen’s Bath Falls?: map 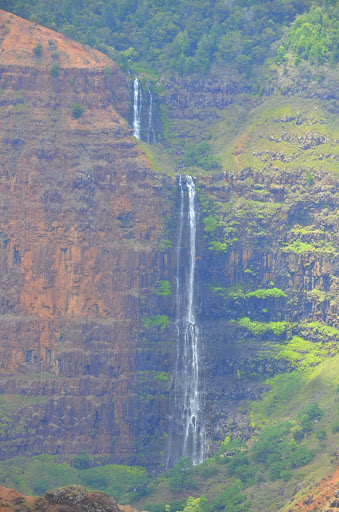 I’ve been visiting Kauai for the past few days. It’s the third of the Hawaiian Islands I’ve visited, after Maui and the Big Island. On the other two islands, it seems to be very easy to find waterfalls. Here on Kauai, they exist, but they are a bit more hidden at times. So I have to admit I was a bit surprised when I stumbled upon Waipo’o Falls so easily.

I had been reading a book about Kauai, and knew that I could hike to the top of the Falls along the Canyon Trail. I’ll explain that in another post for Upper Waipo’o Falls because I feel there’s a distinct difference in terms of what you’ll experience on that hike. Part of the trick is that you can’t see Waipo’o Falls along the Canyon Trail leading to the crest of the falls. You can see a smaller waterfall further above.

So it ends up that the Waipo’o Falls you see here can be viewed directly from the main road. No hike is required! It also can be viewed from the lookout where the Canyon Trail starts. The best view are to be had somewhere around mile markers 10 to 12 on highway 550. You’ll be able to see the whole waterfall from a pull-out along the road. From the lookout between mile markers 13 and 14, you’ll be able to see maybe 2/3 of the Falls.

This is one of those waterfalls that’s definitely worth a visit. From what I understand, it’s best between December and early July, and then it tapers off in the later summer months. Even if you end up missing the falls, you’ll still be viewing Waimea Canyon, which is a stunningly beautiful place.

Where in the World is Waipo’o Falls?