This “middle” falls on Falls River in L’Anse may be one of the quirkiest waterfall experiences that I’ve had. First of all, the easiest way to view the falls is by parking at a Burger King (and of course buying food during the stop). As you start hiking toward the river, you may begin to notice that the temperature will start to get progressively warmer. At the riverside, it was noticeably warmer. I believe there is a plant above the river that causes that. It is a very weird feeling, to say the least.

I’m not sure the trail is “beautiful.” There are houses above the riverside, some distance away. It even seemed like people used the area for recreation/partying? It also didn’t smell particularly great! I have also seen a few descriptions of it as one of the most beautiful rivers in Michigan, but I don’t really agree with that. So why visit? Because it’s really easy to visit! 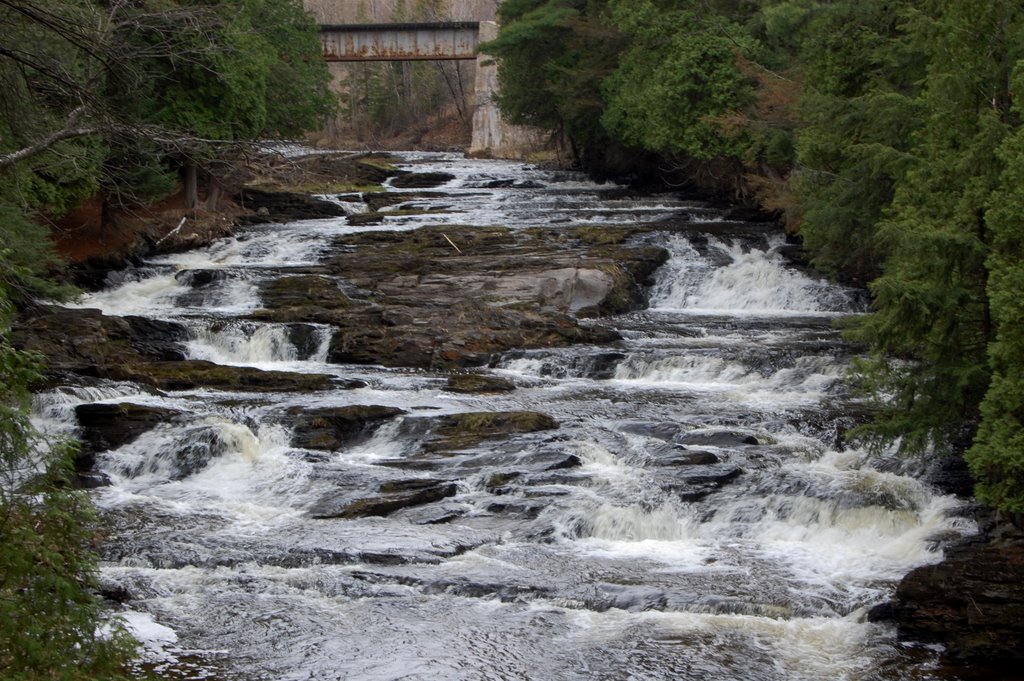 Where in the World is Middle Falls?

The upper portion of Silver River Falls in May 2009

Silver River Falls is not the most exciting waterfall in Michigan, but it is still in a very beautiful region of Michigan and the terrain is fun to explore. The drive to Silver River Falls is destined to be filled with pot-holes, so get ready for a bumpy ride. Luckily, the ride on the dirt road is one of the shorter ones, so it won’t be too long before you arrive at the parking area.

Once at the parking area, begin exploring, there is not a huge elevation change here, so it is very easy to wander around along the Silver River. Right near the parking lot is a drop of a couple of feet that is not extremely interesting. Further downstream is much more photogenic cascade/slide that has been carved into the river.

Where in the World is Silver River Falls?

Powerhouse Falls is one of a number of waterfalls on the aptly named Falls River. The name of the falls is also very appropriate, since it is found directly next to a powerhouse, which I don’t think is currently functional. I appreciate when waterfall names make at least some sense!

Powerhouse Falls is the waterfall furthest upstream on the Falls River, though there could possibly be more upstream that are not accessible. All of the waterfalls along the river have very odd access points, and this one is no exception. In order to get to the falls, I parked at the beginning of a road that had been blocked off. As I started walking down the dirt road, it can get a little confusing. You’ll have to take a right turn, and from there, you’ll just have to follow the sound of the falls. Right near the falls, there is a picnic area. I guess it felt odd because it seemed like people should be driving down the road and using the picnic area, but nobody was to be found.

Accessibility: 9/10 (easy)
Height: 13′
Length of Hike: roadside (though I don’t know if I could get right to the powerhouse)

Powerhouse Falls in May 2009

Where in the World is Powerhouse Falls?

Some people have found the Falls River to be one of the most beautiful rivers with waterfalls in Michigan, but I have to respectfully disagree. The falls on the river are pretty, but there are other rivers in Michigan with far more spectacular waterfalls than these. If anything, these falls seemed underwhelming compared to others I have visited. Even so, if you are in the Baraga or L’Anse area, you should check them out since they are easy to access and view.

*Others have suggested parking near some power plant, but when I did that, I noticed signs that said no trespassing, even though there was a trail. Beginning from Burger King works just as well, and allows you to see a bunch of falls at once, even some smaller ones that probably only flow in the spring.