I am a bit surprised I haven’t already posted about this waterfall along the Amnicon River in Amnicon Falls State Park. I think it may be due to the way I named it on my photo site. It’s a smaller waterfall, but I’ll still mention it nonetheless.

Accessibility: 9/10 (easy, more for the confusing loop of trails than anything else)
Length of Hike: 0.5 miles or so (can be longer)
Height: 6′

Where in the World is Amnicon Falls #2?

I’ve always wished people could become a little bit more creative when naming waterfalls. Upper Falls does clearly describe that is a waterfall further upstream along the Amnicon River, but it’s just not that exciting from a naming perspective! Even “Upper Amnicon Falls” would provide more information about where it’s located, and it could probably be referred to that way! There is the equally as exciting Lower Falls, which is actually pretty cool (as is Upper Falls). If you’re in the same park, there are two falls that were better named, Snake Pit Falls and Now and Then Falls. And then there are other drops that I don’t know if they really have a name, so I’ve called them #1, #2, and #3.

I mention these to indicate what you really get when you visit Amnicon Falls State Park is at least 7 waterfalls! Upper Falls is pretty neat, but you have to take all of them together to appreciate them. It’s a very nice park, and if I had family there, I would totally be taking them there all of the time. It’s really fun to explore all of the trails to find even more falls, even though they aren’t particularly tall. (Upper Falls maybe clocks in at 15′ or so…) And if this doesn’t excite you, don’t forget Big Manitou and Little Manitou Falls aren’t that far away (in Pattison State Park). (Big Manitou clocks in at 165′ tall.) 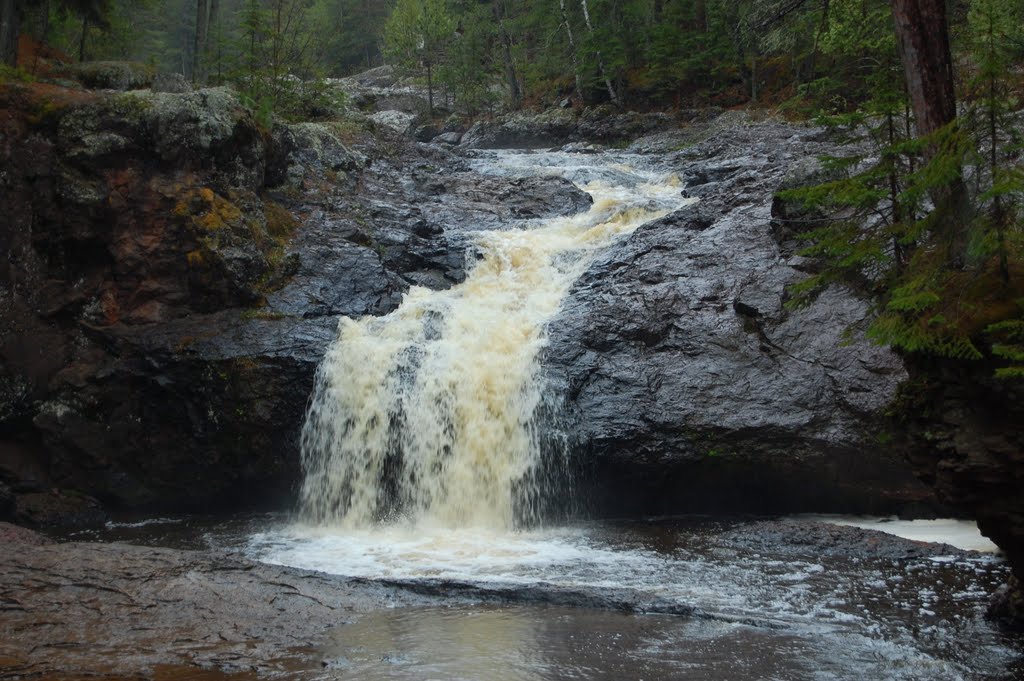 Northern Wisconsin has a number of great waterfalls, and if you’re looking to see a whole bunch in a single hike, then head to Amnicon Falls State Park (which is not that far from Pattison State Park, which contains Big and Little Manitou Falls). Inside Amnicon Falls State Park, there are the not-so-creatively named Upper and Lower Falls, along with other falls along the river (#1 and #3 have been posted). The waterfall with the coolest name, by far, is Snake Pit Falls, and it is a really beautiful waterfall also.

While it does require a little bit of exploring the loop trail, Snake Pit Falls is clearly marked with a sign. It’s hard to say how tall this portion of the falls is. After searching around on the internet, I later discovered there is another drop a few feet after the one shown below. I may have photographed the lower drop during the exploration, but I didn’t seem to notice both drops at the same time. The total drop is somewhere around 20′. I found this particular drop to be very scenic. Each of the drops along the Amnicon River seems to have its own distinct features. It doesn’t look like a series of continuous rapids that blend together over time. I’m guessing the falls flow year-round, except in extremely dry conditions. It had literally just snowed minutes before, lending a certain chilly but appropriate ambiance to the falls. 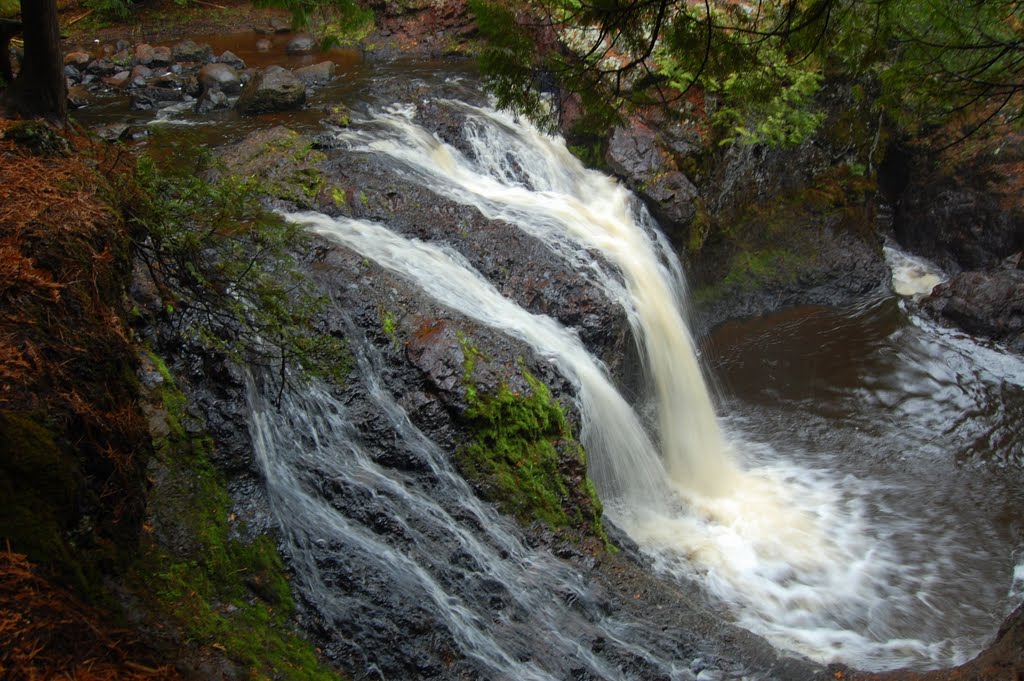 Where in the World is Snake Pit Falls?

There are at least four named waterfalls in Amnicon Falls State Park, but there are numerous other waterfalls along the various rivers and creeks meandering there. One of those waterfalls is described here. The main set of named waterfalls (including Upper and Lower Falls) is not difficult to visit, but some of the other falls in the park are a little more “hidden.”

By “hidden”, I mean that they may not be marked, and it may take just a little bit of exploring to find them. On the day I visited in May, it was actually snowing and was surprisingly chilly, but I put up with the cold to find these falls. This particular falls might be easier to identify because it appears as if there are the remnants of an old bridge on either side of the falls. I believe the falls are near Snake Pit Falls, so look around there if you are unsure. It’s a really great state park to explore.

Accessibility: 9/10 (easy, more for the confusing loop of trails than anything else)
Height: 6′
Length of Hike: 0.3 miles round-trip

A waterfall in Amnicon Falls State Park in May 2010

Where in the World is Amnicon Falls #3?

All of the different waterfalls in Amnicon Falls State Park are rather complex to explain. For a smaller park, there is a lot of exploring to do. As you circle around, you’ll be surprised at how many falls you can find hidden around unexpected bends. On the Amnicon River, there are a number of named falls, including Upper Falls, Lower Falls, and Snake Pit Falls. Upstream of these falls are many unnamed drops. This falls is one of them.

None of the upstream drops are significantly big, though they are often very photogenic. When I visited in mid-May, it was rather chilly outside, and it was snowing on-and-off. Even though spring had arrived, there wasn’t a significant amount of water flowing in the river. At the right time, the river might be raging.

Accessibility: 9/10 (easy, more for the confusing loop of trails than anything else)
Height: 6′
Length of Hike: 0.2 miles round-trip

A waterfall on the Amnicon River in May 2010

Where in the World is Amnicon Falls #1?

I have a special relationship with Lower Potato River Falls. After pulling into the parking area, I headed toward Lower Potato River Falls. As I’m heading down the stairs, through the trees you can get a glimpse of the falls, but it’s really not that good of a view. Trees are blocking parts of the falls, and so I’m hoping that since the stairs lead further downward that I’ll be treated to a better view.

I get to the bottom of the stairs, and what I’m greeted with is a river…there’s no view of the falls to be seen, though I know they’re right around the bend! I wander along what I think is the east side of the river for some time, hoping that maybe that will lead to a better view…But, wow, the rock cliffs on that side of the river are surprisingly steep. I slowly realize that the only way I’m going to get a very good view is to actually cross the river.

Now while I like waterfalls, I’m not a big fan of getting wet. That probably seems very odd…loving waterfalls but not wanting to get wet. If the river were very shallow, I’d try and cross in an instant. But this river appears to be rather uneven in depth. It’s still rather shallow, but there’s essentially NO WAY I’m going to avoid soaking some part of my body, and I’m wearing jeans too. Not sure what’s crawling down below in the river, I decide to leave my socks on…again, very weird. I guess I just feel more comfortable with something between my feet and the riverbed. I take the first jump into the river, and it’s not as easy as it seems to cross. Big rocks shift, so it can be hard to get a firm stance…but I push forward, and after a few seconds, I’ve crossed the 20 foot wide river. I put my shoes back on and start wandering along the less steep western shore. As I turn the corner of the bend that’s blocking the view, my effort is rewarded with a truly beautiful scene. Lower Potato River Falls automatically becomes one of my favorite falls in Wisconsin. It’s a wide waterfall, and at the point I’m standing at, it’s reflection is being revealed in the water. It’s an amazing scene…Now I’ve just got to get back across the river. Upper Potato River Falls is just upstream.

Where in the World is Lower Potato River Falls?

One portion of Lower Falls in May 2010

Lower Falls is the furthest downstream of the large drops on the Gooseberry River. I saw pictures to suggest there might be smaller falls further downstream, which would not surprise me. The river drops numerous times along its journey to Lake Superior.

Lower Falls has two different parts that could even be considered two different falls separated by rock. The photo here shows what I believe is the right side, though I might be wrong about that. Other pictures show different viewpoints. Whatever viewpoint this is at, the falls at Gooseberry Falls State Park are really great and VERY easily accessible.

Where in the World is Lower Gooseberry Falls?

I visited Amnicon Falls State Park this May. I had arrived at the Duluth airport just a few hours earlier, and headed to the park. It hadn’t really started snowing yet, though there were a few sprinkles.

Once inside the park, you’ll find numerous named waterfalls and a number of other waterfalls along the Amnicon River and its tributaries. Lower Falls is one of the more impressive falls in the park, dropping 15 feet or so. The height is not terribly important here. It’s the beauty of the rock surrounding the falls, along with the pedestrian bridge above the falls. On the right side of the picture is an island formed where the river splits in two. You can explore the island and view many other falls.

Lower Falls with pedestrian bridge above (May 2010)

Lower Falls is the furthest downstream in Letchworth State Park. It is the shortest of the drops in the park, but is still very beautiful. All three of the waterfalls are accessible, though Lower Falls does have some uneven parts of trail. Even so, it is easy to access. Along the way to Lower Falls, you will come up to a beautiful brick bridge that crosses the river, and connects multiple trails. When I visited, the trails on the opposite side of the gorge were blocked off.

Lower Falls of the Genesee River in May 2009

Some people have found the Falls River to be one of the most beautiful rivers with waterfalls in Michigan, but I have to respectfully disagree. The falls on the river are pretty, but there are other rivers in Michigan with far more spectacular waterfalls than these. If anything, these falls seemed underwhelming compared to others I have visited. Even so, if you are in the Baraga or L’Anse area, you should check them out since they are easy to access and view.

*Others have suggested parking near some power plant, but when I did that, I noticed signs that said no trespassing, even though there was a trail. Beginning from Burger King works just as well, and allows you to see a bunch of falls at once, even some smaller ones that probably only flow in the spring.