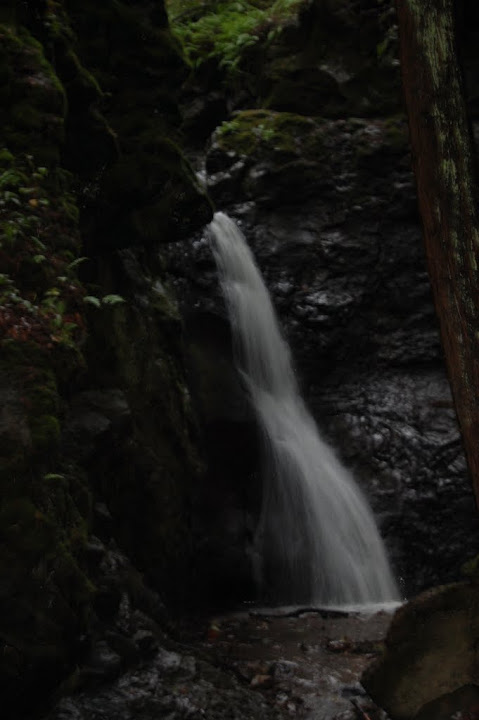 I showed up pretty late at Cascade Falls. The sun wasn’t setting just yet, but inside of the park where the falls are found, it was getting dark. That made it very difficult to photograph this smaller waterfall.

Getting there is a pretty easy ordeal, so that is the one benefit to seeing this falls. I think it could be very pretty when the lighting is right. There were a number of other people photographing the falls, so it actually seems pretty popular.

Where in the World is Cascade Falls?

At the end of a street in San Rafael is a hidden waterfall. This waterfall is known as Mountain View Falls. I found out about this waterfall on another waterfall website, and decided to visit since it seemed to be relatively easy to do…and it is easy to visit. You’ll have to park on the road, and then take the short “hike” to the falls. It’s not really a hike as much as a sidewalk adventure. The waterfall is 70+’ tall, though it’s not very wide. It’s probably best viewed after a lot of rain.

Where in the World is Mountain View Falls?

Just a few hundred feet above Alamere Falls are three other extremely beautiful drops as Alamere Creek travels toward the Pacific Ocean. While not as tall as the final drop, these two are just as photogenic and actually easier to view closeup, especially if you don’t want to make the tricky trek down to the shore.

Even reaching the upper falls is still a task. As you’re approaching the upper falls, you’ll be standing 30 or 40 feet above them at one point, and you’ll have to negotiate your way down the slippery but well worn paths leading to the upper falls. It’s not too bad, though it can seem daunting at first. You are likely to get dirty as you scramble down, and you will want to cover your camera well in order to avoid any damage. It was one of the muddiest treks I’ve ever taken.

The middle drop of Alamere Falls

Where in the World is Upper Alamere Falls?