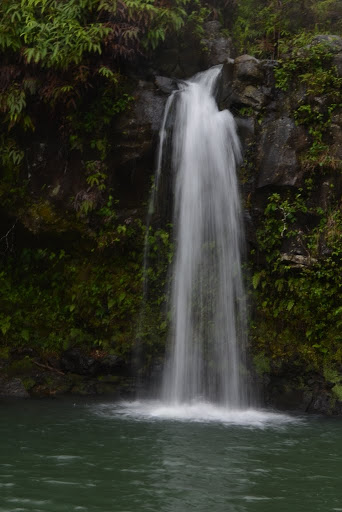 I will mention a few reasons you might want to visit Lower Pua’a Ka’a Falls. First, you’re in Hawaii, and even the smallest waterfall can be scenic and picturesque! Second, this is an extremely easy-to-visit waterfall. Getting to the Upper Falls requires a little more effort, but this can be viewed quickly after parking. (I don’t remember if it can be seen from the road.) Third, while some of the waterfalls along the Hana Highway are highly visible, it is not always easy to stop. In this case it is. This isn’t a very tall waterfall (at about 15-20′ or so), so some might quickly pass it by, but I think it’s still worth a short stop.

Where in the World is Lower Pua’a Ka’a Falls? 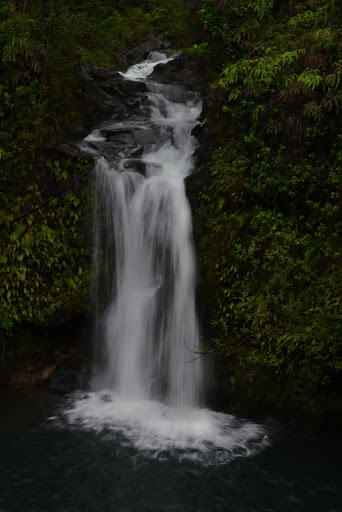 If you ever have the chance to drive the Highway to Hana, you should. I’ve mentioned in previous posts that I didn’t find it to be nearly as terrifying as I had expected it to be. (Continue south past Hana and along the Piilani Highway to experience a higher level of scary driving.) There are many very easy-to-visit waterfalls along the Hana Highway, and two of these falls can be found at the Pua’a Ka’a State Wayside, which you’ll find between mile markers 22 and 23.

The lower falls is very easy to see after crossing the road, while the upper falls requires more effort. I’m having a little difficulty remembering the exact details, though. In the book I was using, it (and other sources) has suggested that you have to cross an elevated waterway to get to the falls, and that it can be scary for people afraid of heights. I do remember crossing over some man-made “object” to get to the falls, but I don’t remember it being particularly scary. (And I’m pretty scared of heights, so if it had been that terrifying, I would have turned around or remembered it much more distinctly.)

So there are a few options…Either I stopped and photographed the falls before actually crossing this scary viaduct, or there was more grating on it than in previous times, so I didn’t feel as nervous. Or there could be been another path? I remember even finding another small waterfall in the vicinity.  While I don’t remember feeling scared, I do remember it being muddy! If you can find your way to the falls, I think it’s definitely worth it. It isn’t extremely tall, but I still felt it was very beautiful, as are most things on Maui!

Where in the World is Upper Pua’a Ka’a Falls? 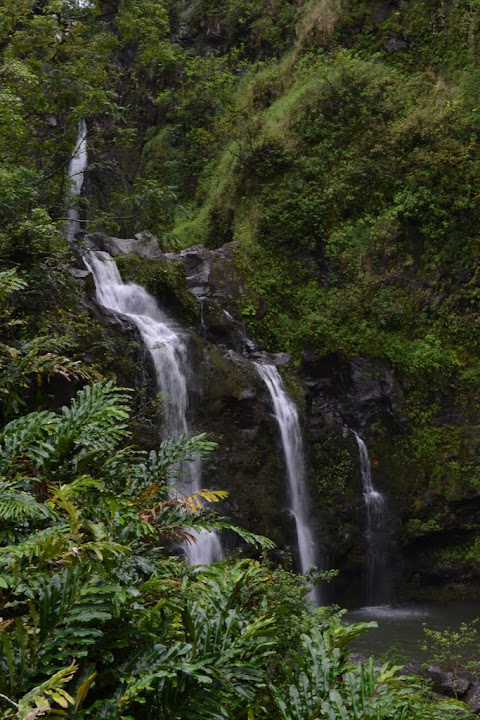 The Hana Highway is one of those “adventures” on the island of Maui that I found to be less daunting than I had expected. I’ve driven on some narrow roads before, and because there seemed to be a certain level of common sense about speed limits, the Hana Highway was a stunningly beautiful drive without a significant amount of stress. (There were some equally narrow roads in Puerto Rico where speed limits were ignored and garbage trucks were barreling down the road at 45+ mph! I was actually more nervous driving south of Hana and along the Piilani Highway.)

So if you decide to drive the Hana Highway, you’ll find that some stops are very easy. And then there are attractions like Upper Waikani Falls (aka Three Bears Falls). There’s no parking near the falls, the road is narrow (as is expected), and you have to make that quick decision about whether you’re going to stop or not. I must have been very lucky, and knew that it was coming up on my journey. I slowed down, and managed to park off of the road just enough that the rental car wasn’t in any immediate danger. There were four or five other cars there also. I didn’t stay for a long time, nor did I try to get to the base of the falls (which I’m not sure I would try). I did end up capturing another beautifully green waterfall along the Hana Highway.

Accessibility: 10/10 (easy, if you can find parking, though it is “roadside”)
Height: 70′
Length of Hike: Roadside

Where in the World is Upper Waikani Falls? 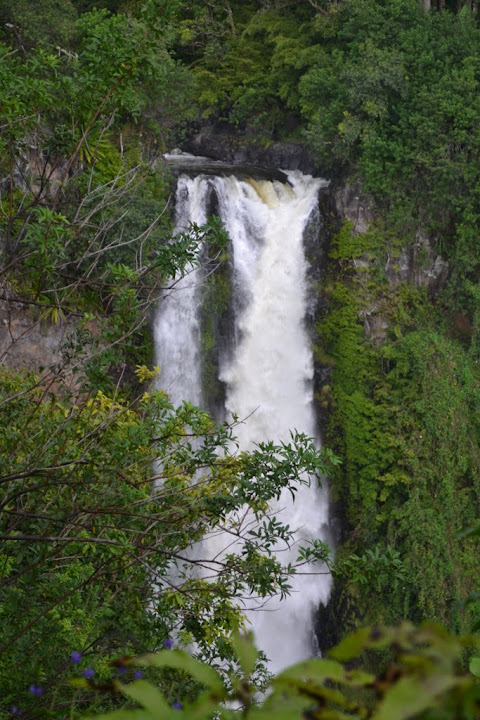 On the southeastern side of Maui, there are a significant number of waterfalls, and many of them are found in Haleakala National Park. The main attraction is Waimoku Falls, which is over 400′ tall. The hike to Waimoku Falls is extremely enjoyable, and along the way you encounter other waterfalls. In a separate place, some of them would get their own names, though they don’t here because of their neighbor. One waterfall, though, does have a name, and it is Makahiku Falls.

Makahiku Falls is tall, though not as tall as Waimoku Falls. It is actually much wider than Waimoku Falls. If you’re like me, you’ll be amazed by the falls, and yet be somewhat disappointed. As you might be able to tell in the picture, it is rather difficult to capture the whole of Waimoku Falls. There are a number of trees and shrubs blocking the view. The shape of the cliffs also seem to obscure the base of the falls. If I remember correctly, I tried to find a different vantage point from the trail that led to a better shot, but couldn’t find that spot. So in the end, I settled for most of the falls. If you’ve come this far, though, you shouldn’t be deterred from seeking out Makahiku Falls!

Where in the World is Makahiku Falls?

On the southeast side of Maui in Haleakala National Park, there are a number of impressive waterfalls along Pipiwai Stream. The main attraction is Waimoku Falls (towering at 400′), though that does require a hike. I’m not sure if I would drive along the narrow roads to this portion of the park without visiting Waimoku Falls, but if you don’t wish to hike, the Falls at ‘Ohe’o Gulch are your best option. They are also known as the Seven Sacred Pools.

After parking, instead of heading toward Waimoku Falls, head east along a different trail. After just a very short distance, you’ll arrive at the Falls at ‘Ohe’o Gulch. They are nowhere near as tall, but the scenery is still breathtaking. The intense greens pop out on both sides of the river. The bridge above the one falls is the road that you just drove over a few minutes before. If you head a little south, you’ll also get spectacular views of the ocean.

I should mention many people head to the falls to swim in them. On this specific day in early March, though, the water levels were too high to swim safely. If swimming in the pools is your main goal, I would suggest calling ahead so you’re not disappointed. 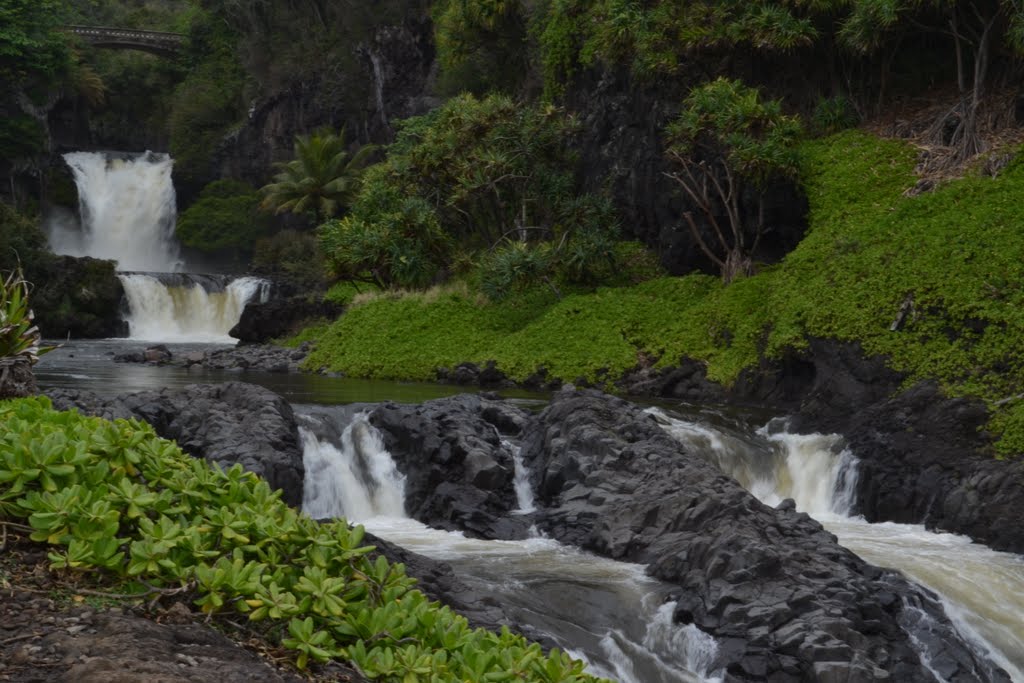 Where in the World is the Falls at ‘Ohe’o Gulch? 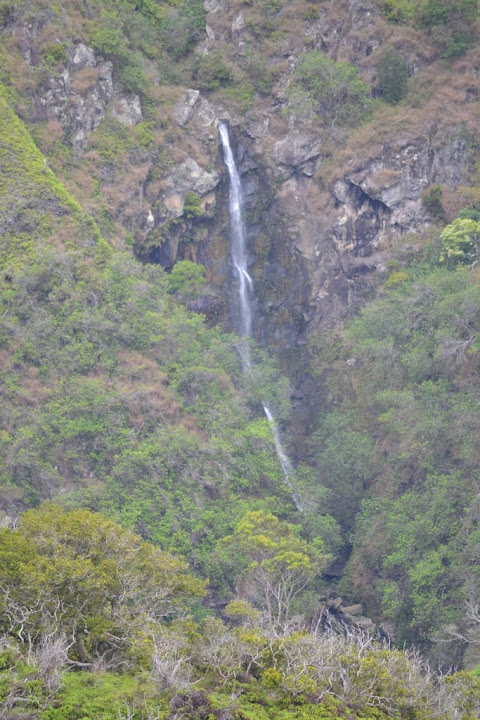 The hike to the Falls on Pipiwai Stream (and Waimoku Falls further upstream) is not really difficult. It’s getting to the point where you can hike in the first place that poses the real challenge…And it’s an intense one.

Haleakala National Park has a number of distinct regions. The more widely known region encompasses Mount Haleakala and its set of adventures. Though still connected to the park, the portion of the park on the southeastern shore of Maui has a distinctly different feel, and it’s not exactly simple to get to. There are two options, really…one on the Highway to Hana, and the other heading south from Kahului. Most people don’t seem to suggest taking the second option, and the first option on the Highway to Hana is breathtaking (in more ways than one). (Check out my post on Lower Waikamoi Falls to get my feelings about the first portion of the Highway to Hana.)
I stayed in Hana for the night, and then headed south toward the park. The road seems to get narrower…and narrower…and narrower. There were portions of the road where you couldn’t even sense what was in front of you, and you hope that no one else is speeding along these very winding curves. If the first portion of the Highway to Hana scared you, do not proceed! This portion of the road is not nearly as well signed, and the inherent danger level is higher. It’s not impossible though!  (I drove on roads in Puerto Rico where I feared for my life more than here.) And it doesn’t hurt that the drive is spectacularly beautiful.
You’ll be headed toward the parking area for O’heo Gulch and the Pipiwai Trail, which leads to Waimoku Falls at its end. There is an entrance fee, though it is well worth it, and you can visit the whole park for a number of days. The hike starts by crossing the Highway to Hana, and continues uphill, though at a very modest pace. You’ll pass by Makahiku Falls. Continue along to find this falls. If the Pipiwai Stream is flowing, you’ll hear it pretty clearly, and by following the well-worn trails, you’ll likely be able to find the falls here. They are not named, nor are they marked, but by paying attention, you’ll notice a side trail leading downhill. It’s not really dangerous, and the scenery is amazing…Continue along, though…You haven’t arrived at the main attraction yet.
Directions:
Accessibility: 6/10 (moderate)
Height: 40′
Length of Hike: 1.5 miles round-trip (3 miles to Waimoku Falls) 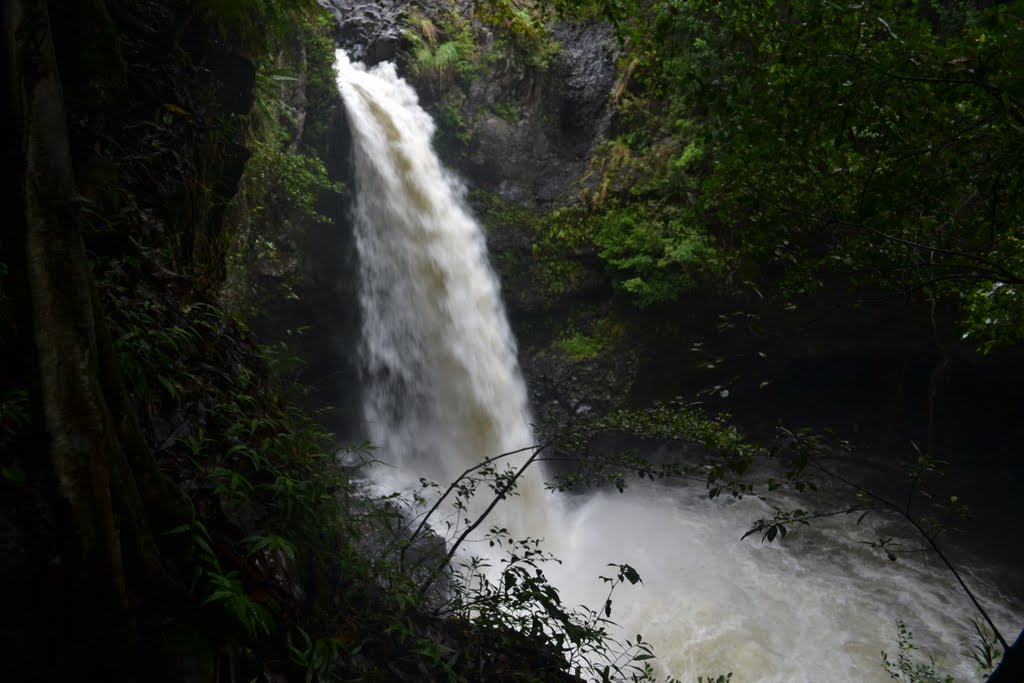 Where in the World is the Falls on Pipiwai Stream?