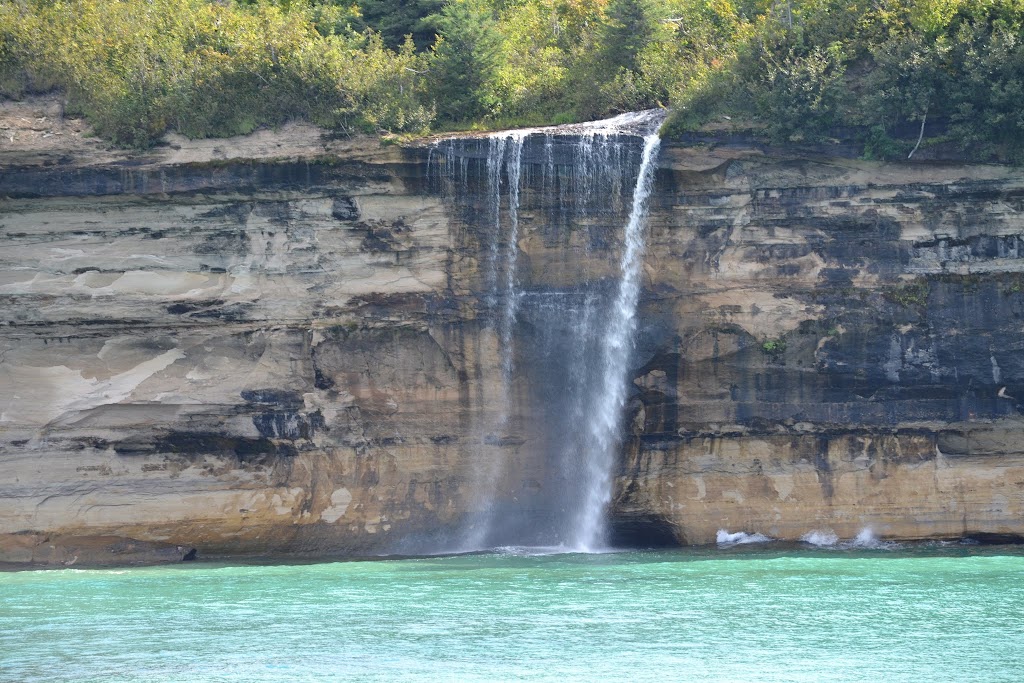 Sandstone Falls, which clearly gets it’s name from the surrounding sandstone rock, is the fourth of five major waterfalls along the Black River in the Upper Peninsula of Michigan. Out of the five waterfall, it is probably the least interesting. It’s not that it isn’t a nice waterfall to visit, it’s that the other four waterfalls are so uniquely shaped. Even so, what I love about the Black River is that the five waterfalls you can visit are all different shapes, heights, and widths. There is no repetition here.

Where in the World is Sandstone Falls?

The Black River splits into two at least once during it’s journey toward Lake Superior, and this split produces Great Conglomerate Falls. The Black River is rather wide at this point, and so it is difficult to photograph the whole falls at this point. I used the panoramic mode on my one camera in order to get the complete falls as best as I could.

A panoramic view of Great Conglomerate Falls in August 2008 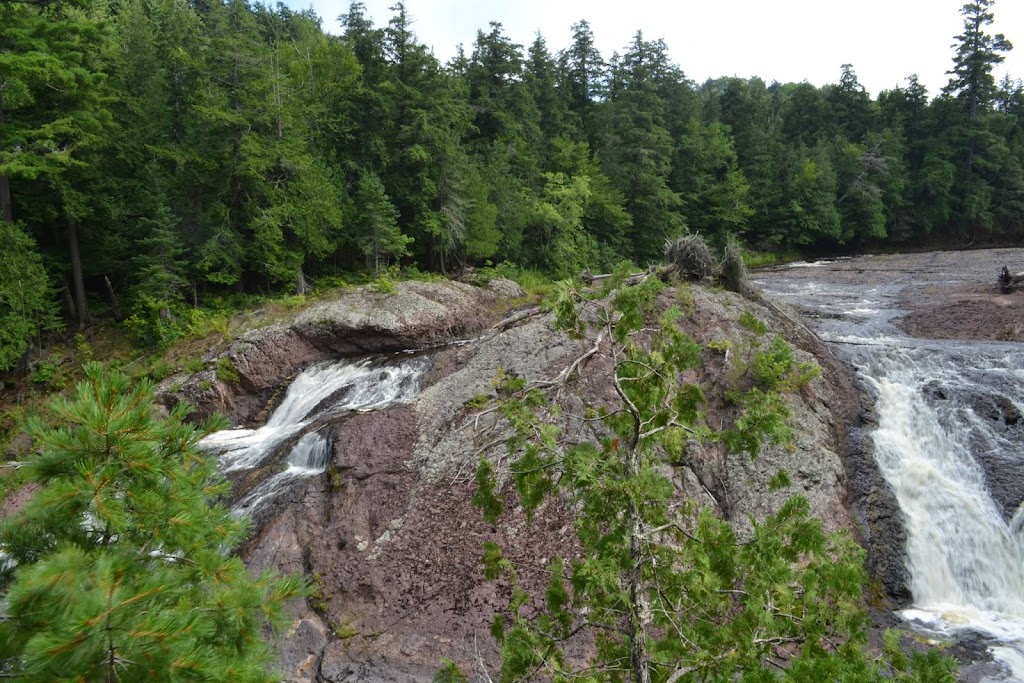 Where in the World is Great Conglomerate Falls?

Potawatomi Falls is very close to Gorge Falls, which I just mentioned talked about. Gorge Falls is narrow. Potawatomi Falls is wildly different, even though it is less than a quarter of a mile upstream. It’s very difficult to gauge size from afar, so maybe the waterfall isn’t as wide as I think, but it’s still pretty wide. The width of the falls does vary on the time of year. In times of low flow, the waterfall is probably 25’+ wide. In high flow, the width of the falls almost triples, as the water flows over a much larger area. Here’s a picture in high flow.

There are two different ways to view the falls: park at one of the beginning or ending falls (Great Conglomerate Falls or Rainbow Falls) and take the hike past all of the falls. Roundtrip, I’m guessing that’s at least 6 miles? Or you can drive and walk to each of the falls separately (Potowatomi and Gorge are at the same parking area). This may be just as long, as some of the hikes to each separate falls are 3/4+ miles one-way.

Where  in the World is Potawatomi Falls?

Gorge Falls clearly indicates that this waterfall is found in a gorge, and the gorge is extremely interesting. To view this waterfall, you have entered into the gorge. When I say that these waterfalls are uniquely distinct, here’s why… Gorge Falls is only about 5′ wide at most and about 35′ tall. The waterfall just upstream of it, Potawatomi Falls, is 30-35′ tall, and anywhere from 150-200′ wide, I’m guessing. In less than a quarter of a mile, the river has narrowed from about 175′ to just 5′. It’s just amazing!

There are two different ways to view the falls: park at one of the beginning or ending falls (Great Conglomerate Falls or Rainbow Falls) and take the hike past all of the falls. Round-trip, I’m guessing that’s at least 6 miles? Or you can drive and walk to each of the falls separately (Potowatomi and Gorge are at the same parking area). This may be just as long, as some of the hikes to each separate falls are 3/4+ miles one-way. 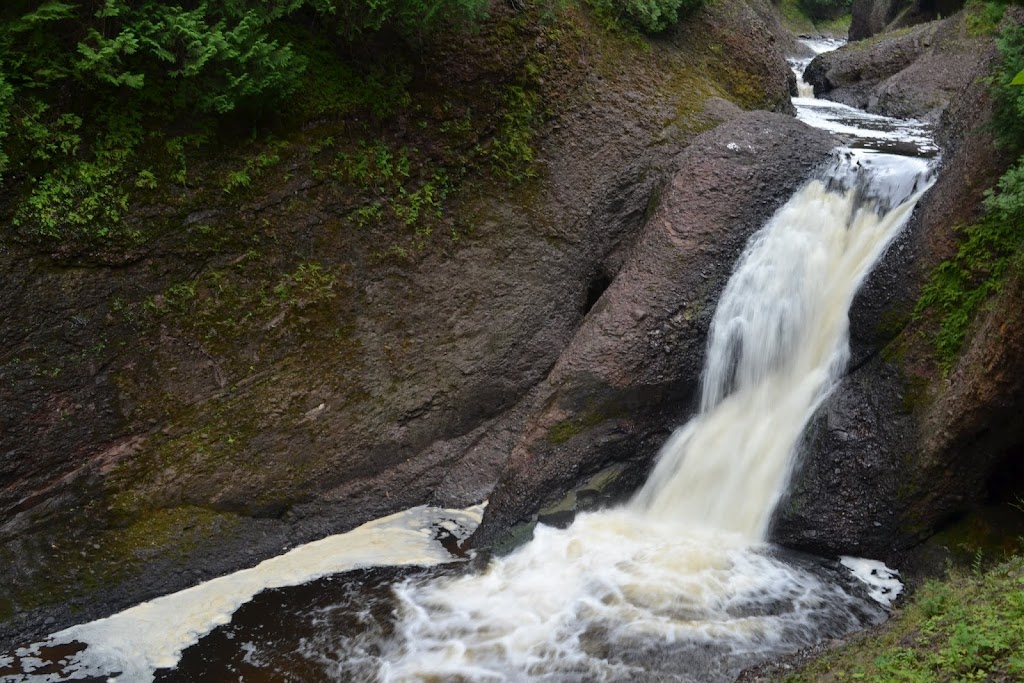 Where in the World is Gorge Falls? 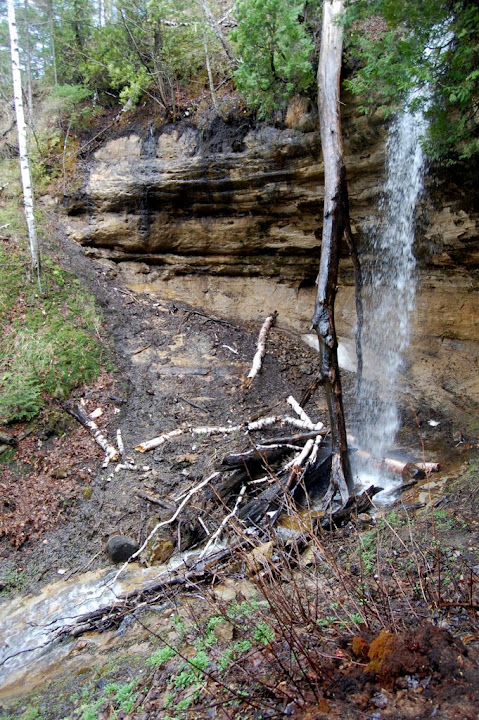 Potato Patch Falls in May 2009

Potato Patch Falls is a waterfall that isn’t advertised on the Pictured Rocks National Lakeshore map, but it’s a very beautiful waterfall, and it’s relatively easy to access. It may be difficult to get a view of the whole waterfall, as the rock is very slippery and not very firm in places (at least it wasn’t when I visited this May).

Blue ice near the falls

Where in the World is Potato Patch Falls?