With Old Faithful and so many other geysers, Mammoth Hot Springs, and the wildlife, it can be difficult to choose what to do. And you should plan enough time to visit all of them. But you should also plan to visit a number of waterfalls, and if you only have time for a few, the falls on the Yellowstone River are probably the best to choose. The scenery around the falls is amazing.

The falls are very easy to get to and visit. They can be accessed just south of Canyon Village. From the North Rim Drive, Inspiration Point, Grandview Point and Lookout Point all give different views of the Lower Falls. From the South Rim Drive, Artists Point gives a view of the Lower Falls. As a waterfall fan, I believe I stopped at a number of these viewpoints since each stop is unique. Uncle Tom’s Trail is found on the South Rim, and that also leads down to a view of the falls. I did not do that, as I’m not a big fan of stairs/heights. No matter what, you’ll be able to find a wonderful view of the falls.

Where in the World is Lower Yellowstone Falls?

When I visited Montana and Wyoming in 2014, I visited a number of Wyoming waterfalls in Yellowstone National Park. In Montana, I was able to visit two waterfalls on the way from Bozeman and back. The first, Ousel Falls, is outside of Big Sky. The second, Pine Creek Falls, is a bit more isolated and off the beaten path. (As the crow flies, these waterfalls are about 45 miles apart. In reality, the drive between the two is much longer.

I visited this one on the way back from Yellowstone. I exited Yellowstone from the north entrance, heading along US-89 toward Livingston. The roads and trails to the falls are not wildly far off of US-89, and the drive to the falls was stunningly beautiful. US-89 hugs the Yellowstone River for much of the drive. After veering off US-89 to get to the campground and trail head, there was some driving down some forest roads. I don’t remember them being particularly problematic, but it was four years ago.

I also don’t remember the hike to the falls being particularly difficult. It was in a mountainous area, so there was some elevation climb, I’m sure. I usually remember if the elevation climb is steeper, and this one doesn’t ring a bell. (The elevation change is listed at 390′ gain over 1.25 miles, so it is not wildly steep, but still will some uphill climb.) The trail head had a few other cars, with a few other people, including one larger family, hiking the trail. The hike to the falls was beautiful, though I tried to stay nearby others. (You should be aware of bears and another animals in the area.) Overall, it’s definitely a worthwhile hike to get a quick burst of Montana beauty a bit further from the busy Yellowstone trails.

Where in the World is Pine Creek Falls?

There are many memorable waterfalls in Yellowstone National Park. Upper and Lower Yellowstone Falls are probably the main attractions, understandably so. Other falls, like Tower Falls and Gibbon Falls, might play second fiddle, but are still interesting stops. Firehole Falls is a nice waterfall, but probably one of those waterfalls you’d go searching for if you’re really into waterfalls (like me).

A few reasons do exist to view the falls. First, it’s easy to get to. While the road to the falls is one-way (so choose where you start carefully), it’s a short drive, and once you arrive at the falls, you’re there! There’s no hike involved. Second, you’ll probably be one of only a few people there. Some parts of Yellowstone are moderately to crazy busy, depending on the time of year. Firehole Falls is a quiet respite from the crowds. And honestly, I would argue anywhere in Yellowstone is worth the visit!!

Where in the World is Firehole Falls?

Yellowstone National Park has some truly awesome, amazing waterfalls. Upper and Lower Yellowstone Falls are should be at the top of everyone’s list. But there are many other falls that are easy to visit, and Tower Falls just happens to be one of them.

So let’s start with the positives. Tower Falls is pretty easy to get to. There’s a short hike, and along the way you’re likely to a variety of wildlife. When you arrive at the viewpoint, you’ll be rewarded with a 132′ waterfall. It’s a beautiful waterfall surrounded by beautiful scenery.

So what are the “negatives”…it’s hard to use that term when referring to Yellowstone National Park..the negative is that the trail is currently shorter than it used to be. One used to be able to get to the base of the falls, where the view was more impressive. From the current end of the trail, you’re rather high above the falls, and the trees block off the lowest portion of the falls. That shouldn’t stop you from visiting the falls. The hike is short enough that it doesn’t take a significant amount of time out of your day.

Where in the World is Tower Falls? 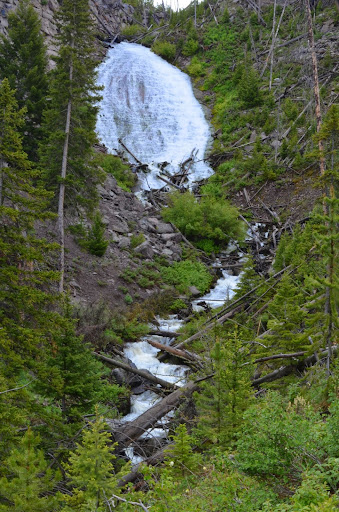 In Yellowstone National Park, the very well known Lower and Upper Yellowstone Falls can be found. In the park, though, are a number of other waterfalls. While some of the others are widely visited, a few are quieter, which might be nice if you’re looking for something a bit less busy.

Wraith Falls might be a good choice for the “less busy” in Yellowstone. On the hike to the falls, I only passed 2 or 3 other groups of people. I distinctly remember being slightly more worried about bears in the area since this area wasn’t as traversed. I didn’t see any bears or wildlife here, though just down the road, I do remember seeing a bear along a hillside.

The hike to Wraith Falls is fairly straightforward. It’s about 1/2 a mile to the falls from the parking area, which has enough space for 5 or 6 cars. I didn’t have any issue finding parking. The hike goes pretty quickly, and you’ll arrive at the falls in 15 minutes or so. You won’t be able to get particularly close to the falls because of the way the trail is set up. As you might be able to tell from the picture, there is a lot of debris in the way of the falls, preventing you from getting much closer. It’s still an interesting waterfall, looking much like a washboard.

Where in the World is Wraith Falls? 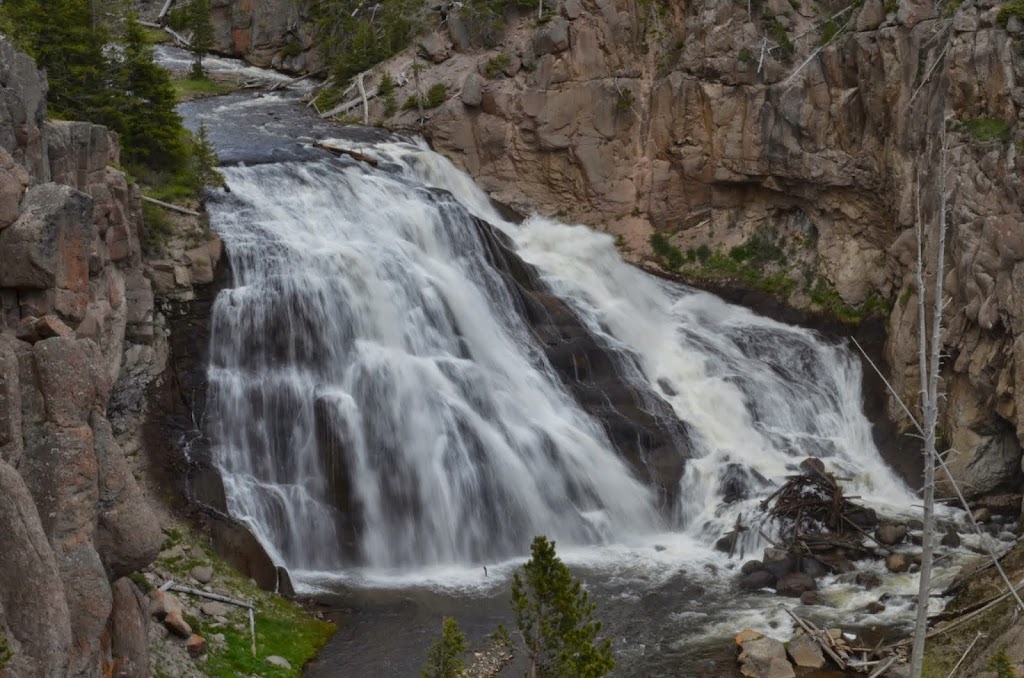 These past few days, I’ve been visiting Yellowstone National Park, which is mostly in Wyoming. I flew into Bozeman, Montana, though, and decided to see if I could find any waterfalls in Montana on my way to the park. I found two easy-to-visit waterfalls, one on the way there, and one on the way back.

Ousel Falls was the first of the falls I visited along my journey, and it was an easy visit. It is just a few miles off of US-191 (which I felt was the much easier way to access Yellowstone from Bozeman). When you turn to head to Big Sky, you’ll pass through a surprisingly nice residential and recreation area. (It was more “built up” than I was expecting.)

After arriving at the trailhead, it’s a 3/4 mile hike to the falls. It isn’t extremely difficult, though it isn’t flat, consistently uphill, or consistently downhill. It’s more of a “roller coaster” hike ranking on the easier side of moderate. There are two views of the falls. One of the views shows the upper “drop” more clearly. The view at the base of the falls reveals much of the beautiful rock surrounding the falls. Either of these produce great photos, and there’s a picnic area at the base. This is definitely a worthwhile detour while heading to Yellowstone, and you’ll even find some nice restaurants in the Big Sky resort area.

(And an ousel is a kind of bird. A waterfall in Colorado, Ouzel Falls, is also named after the bird, just with a different spelling.)

Where in the World is Ousel Falls?