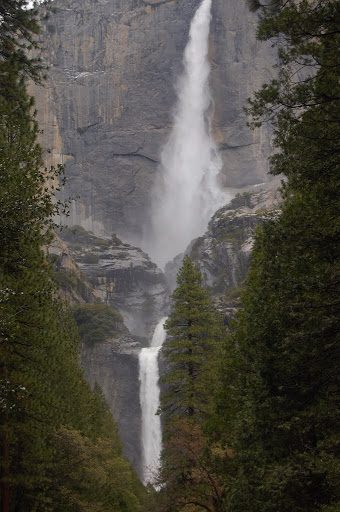 I love waterfalls, but I have this pet peeve that has arisen. You may notice that I don’t officially rank any waterfall on a scale. I may not exactly love every waterfall equally, but I find that it’s all so subjective. What I find as interesting, you may find as uninteresting. There’s a tendency to believe that just because a waterfall is one of the tallest or widest, that it’s automatically one of the best. And that’s not always the case.

And yet for Yosemite Falls, one of the tallest waterfalls in the world, I can say it is undoubtedly an awesome waterfall. At 2425′ tall, it is not THE tallest, but it is up there. It’s height is part of why it is so awesome, but it is also its surroundings. The almost vertical rock walls mean that Yosemite Falls actually has two major portions that are plunge down. Because it’s so tall, it can be viewed from a significant portion of the valley. That means you will be provided with a multitude of different options for shooting the falls.

The most obvious choice is via one of the main trails that lead directly to viewing points for the falls. One of them is handicapped accessible and leads directly to the base of the lower drop. If you’re there at the right time, you’re guaranteed to be sprayed with water. But expand your options. Try different places. You’ll be surprised how you can frame the falls in between the towering pine trees. But even when you’re not thinking about Yosemite Falls, still look for it. Along the way back from Vernal Falls, you will be able to see Yosemite Falls off in the distance. And yet because it’s so tall, it’s presence is still powerful.  There is also a much more difficult trail that leads further up to the falls, but it is strenuous, and caution is advised.

Now for the tricky part…You’ve got to show up at the correct time of the year to see Yosemite Falls. In the winter, you may see water flowing, but you’re guaranteed some snow. Even in May, which is one of the best months to see the falls, it snowed! By the time July and August roll around, the falls may be reduced to a trickle or be non-existent. This is true for many of the other falls in the park, though not all.

It’s definitely worth a visit to Yosemite National Park even if you’re not into waterfalls, though I can’t imagine who wouldn’t be amazed by the sheer number of them in the park. Even with fog shrouding the falls at times, it was still a mystical experience.

Accessibility: 10/10 (easy)
Height: 2425′
Distance of Hike: This varies depending on the view you want…Anywhere from 0 to 5 miles one-way

Where in the World is Yosemite Falls?