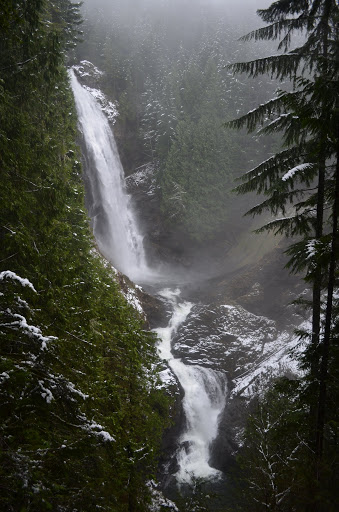 Wallace Falls State Park is a truly spectacular place to visit, and there are a number of great waterfalls in the park.  The major drops are found along the Wallace River, and I was trying to decide which one to write about first. I decided to write about my favorite, Middle Wallace Falls.

It wasn’t snowing in Seattle this past weekend, the first weekend of December. But I did know that it was snowing in parts of the Cascades. I was a little bit hesitant at first about trying to visit the falls, but I decided to do it anyway. I drove the 40 or so miles from Seattle to the park. I could tell that it had snowed nearby, as some of the car roofs were covered in it.

I arrived at the park, and started along the hike. The snow was minimal and melting at first. I was surprised at how “warm” it felt (I think it had something to do with the relative humidity). As I started hiking upward (after the first 0.5 miles or so), the snow started building up. Near the end of the trail at Upper Wallace Falls, there must have been 3 or 4 inches covering the ground, and the snow kept dropping from the trees into my coat. Even in the snow and cold, I was still enjoying the amazing beauty around me.

The drops along the Wallace River might rank as some of the most impressive drops in the region. The area has a very “Yosemite-like” feel, especially since I also visited Yosemite after a snowfall. The evergreens surrounding me everywhere really added to the ambiance. And then to come upon this spectacular, 367′ total drop, was the icing on the cake.  It’s definitely worth a visit, no matter the season.

Accessibility: 3/10 (steep, though nowhere near impossible…more complicated when snow is covering the ground, but still fun)
Height: 367′
Length of Hike: 4.2 miles round-trip (to Middle Falls)

Where in the World is Middle Wallace Falls?