Fundy National Park is known for the big changes in the sea level due to the tides, but it also has other attractions that are very interesting. Third Vault Falls is THE waterfall to visit in the park, but it is a strenuous hike, in my opinion.

If you’re looking for something less exhausting, Dickson Falls may be the waterfall/attraction for you. Dickson Falls is about half the height of Third Vault Falls, though Dickson Falls doesn’t seem as imposing. The hike, though, is under 1 mile round-trip. It was a rather easy hike. There are boardwalks and stairs built into the hike, and this allows for many different views of the falls. It’s definitely worth a stop if you’re in the park.

Where in the World is Dickson Falls?

In 2016, I flew into Halifax, and decided to hit a few different Canadian provinces and check off a few waterfalls in each province. Third Vault Falls in New Brunswick was the most memorable waterfall I visited in the province (out of three). As I was driving through Riverside-Albert, I knew there was another waterfall near the town, and decided to visit it. I had already hiked to Third Vault Falls that day, which is a moderately strenuous hike, so I was a bit worn out.

I had also read that Crooked Creek Falls was a moderately strenuous hike, but I decided to check the waterfall off the list anyway. It is definitely a shorter hike than Third Vault Falls, but in that short distance, it is a steep downhill hike. On the return, it is a steep uphill hike. My legs were definitely worn out after those two hikes.

Crooked Creek Falls might not be worth it is as much as Third Vault Falls. It is a beautiful little waterfall, but it isn’t as photogenic as others. It’s a waterfall that I would recommend to true waterfall lovers, though I did notice some people posting about swimming in the creek, so that may be something for you to enjoy.

Crooked Creek Falls in May 2016

Where in the World is Crooked Creek Falls? 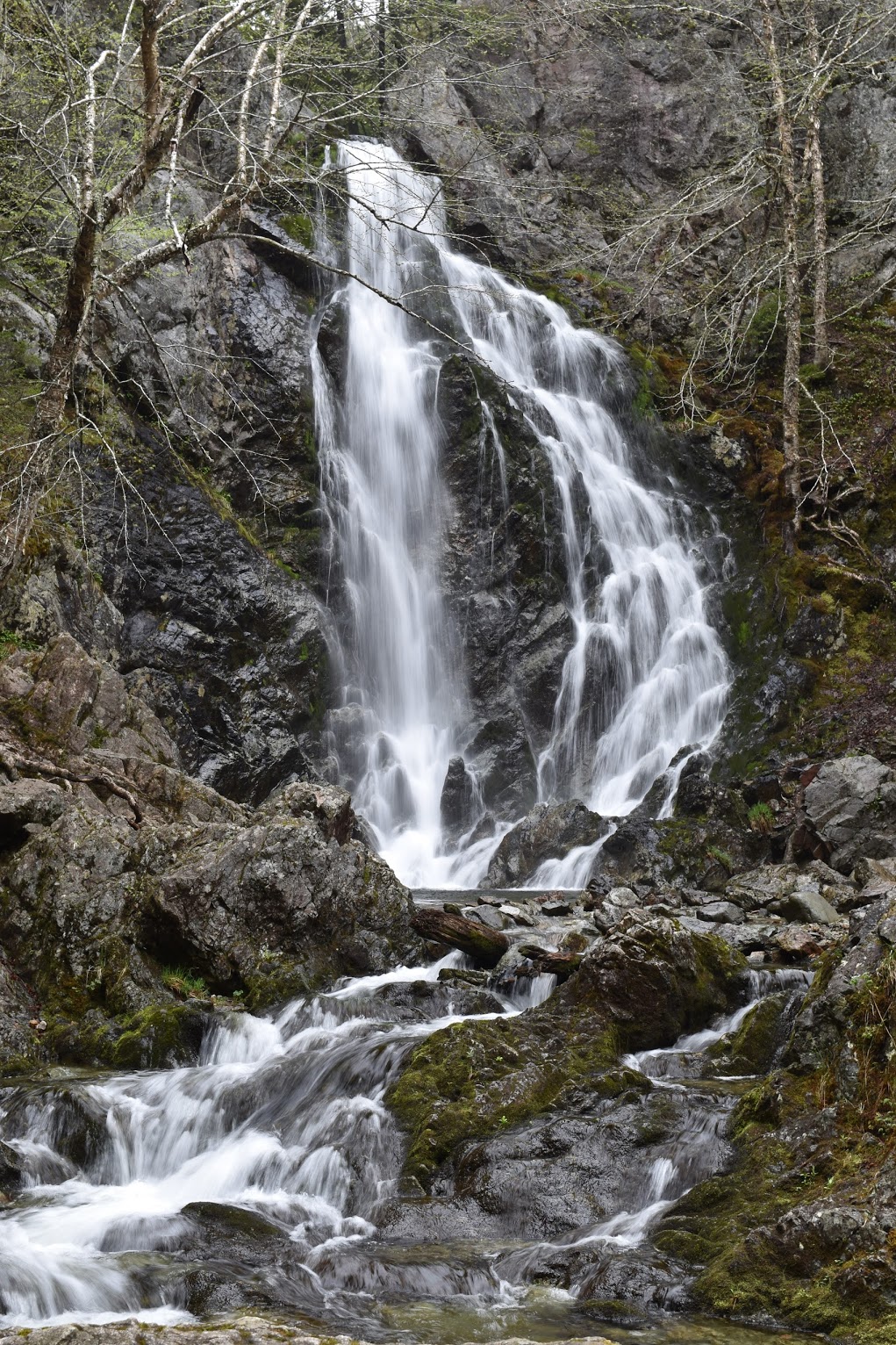 This was a strategic decision on my part. The book and Fundy National Park’s website both list the hike Third Vault Falls as a moderate to strenuous hike. I usually prefer to do those hikes first so that I haven’t already walked some insane distance before getting to another insane hike. I appreciate that they listed it as this difficulty level because some of my least favorite hikes have been due to perception (“It’s an easy hike” when it’s actually not…).

The reason this hike is more strenuous is due to the last 20%. The first 80% of the hike is surprisingly on flat ground. The last 20% is a steep downhill trek on the way to the falls, and a steep uphill climb on the way back! In addition to being a steep downhill trek, the final 5% involves walking on the edge of the river at times. The wet rocks can be very slippery, so wear appropriate shoes! They have done a pretty good job of placing stairs in places where it might become a bit treacherous. I was overall impressed with the hike, even though I was worn out after arriving back at the car!

There are two ways to view the falls. The view you see in my photo is from what is probably the safer perspective, which is by heading right toward the sign that says end of the trail. There are trees that may block the top of the falls, and this could be problematic when they they are in full bloom.  If instead of crossing the stream and heading toward the sign I mentioned, you head to the left on a faint trail that climbs uphill, you’ll find the other option that gets you closer to the falls. This one seems a bit more dangerous to do, though I still think it’s manageable. I decided against this because my current shoes don’t seem to grip slippery rocks very well. (Always use common sense…don’t do something just because someone else said it might be possible.)

Where in the World is Third Vault Falls?