It’s been nine years since I visited Lucifer Falls (along with a number of other waterfalls in Upstate New York). It was an interesting time to visit the region. As you can tell, all of the snow had melted by that time in early May, but a number of the state parks in the area weren’t at full “capacity”. At Watkins Glen State Park, only a portion of the trail was open as they checked for issues with the trails. Similarly, I think only a portion of the trails at Robert H Treman State Park (where Lucifer Falls is found) were fully open. So while you’ll be able to visit many of the falls in early May, a few may still be inaccessible.

In Ithaca, there are so many impressive waterfalls: Taughannock Falls, Ithaca Falls, New York, all of the Buttermilk Falls, etc. Lucifer Falls is another one to add to the list. At 115′ tall and found in another beautiful gorge, it’s a truly impressive waterfall. You can  get the sense that at higher flow than what is in the picture below, the waterfall is even wider. You can also get closer to the falls at the right time of year, though I think that was part of the trail that had limited/closed access (or I just decided not to go further since you get a fairly good view of the falls from the viewpoint).

I don’t remember the hike to the falls being wildly difficult, though it was nine years ago. (That’s the downside of writing about a waterfall so long after.) There are a lot of stairs as you get closer to the falls, as you might be able to notice in the picture. The trail does continue on from one entrance to the other entrance. Near the entrance that I would recommend, you’ll also find the smaller Old Mill Falls.

This third drop that I classified has three smaller drops that are extremely close to each other. You could almost call this Triple Falls. If this waterfall were all by itself, I’m not sure that it would be a main attraction (though that also depends on where the falls are located). In this case, you’ll see so many other waterfalls that it’s worth it to keep hiking. (Depending on how you choose to hike, there is a moderate ascent, with a much easier descent.)

Where in the World is Waterfall #3?

This is the kind of waterfall that makes you begin to question: when do I count a waterfall as its own separate waterfall? There are so many waterfalls in Buttermilk Falls State Park, some large and some smaller, such as this one. I guess you could really consider it one large waterfall with multiple drops separated by more distance. Or you could consider it to be multiple waterfalls. It’s confusing. How do I even identify where this falls is in location to other falls in the park…I’m not really sure.

It would probably help if they all had unique names. Ricketts Glen State Park in Pennsylvania has names for each of the major (and even some minor) drops, which makes it easier to remember and identify the falls, and even give info about where they’re located. You’ll see this falls if you take the whole hike along the gorge, but if you just stop to see Buttermilk Falls, you’ll miss it. 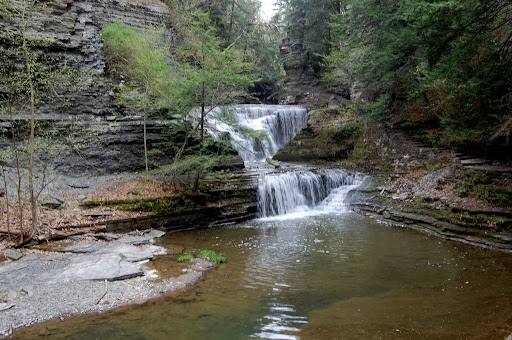 Where in the World is Waterfall #2?

The last post about Buttermilk Falls State Park was a little less than a year ago, so I’m going to explain a little bit again about what’s going on here.

Buttermilk Falls State Park is right outside of Ithaca. In the time that I lived there, I didn’t realize how close it was. I though it was further out. There are two different entrances. The main one leads to an easy descent but a difficult ascent, though all with stairs. We did the descent first. As I’ve said before, it’s really just one big waterfall that has numerous drops of very significant size. It would probably help if there were separate names for each of the drops. Upper Buttermilk Falls is what I refer to as the drop just above the main waterfall. I tend to believe that the main falls and some of the smaller falls upstream are more interesting. 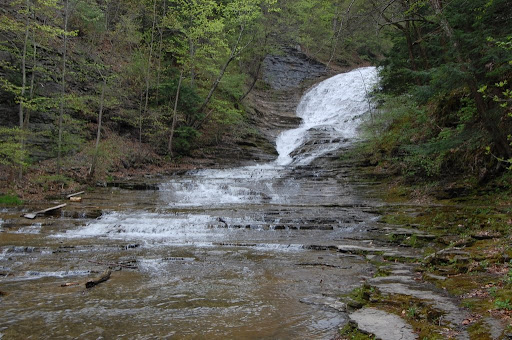 Upper Buttermilk Falls in May 2009

Where in the World is Upper Buttermilk Falls?

The falls are taller than they appear, and are wider than Taughannock Falls. The gorge at that point is not that high above you.  The falls are only a short distance from Lake Cayuga. From this point to the base of the falls, you may be able to walk on the bedrock in the river, as the water levels are usually low. Be careful, though, as that is not always the case, especially after a lot of rain.

Directions (to view base of the falls):

Where in the World is Lower Taughannock Falls?

There are numerous drops along Buttermilk Creek in Ithaca, and in essence they could be viewed as one very large waterfall that drops a considerable distance. This waterfall here is not the first waterfall you will see. Buttermilk Falls and Upper Buttermilk Falls will both come before this drop. I’m just designating this the first unnamed drop on the creek.

I wish I could explain the beauty of this drop adequately. The trees block the view somewhat, so the picture cannot do justice to how interesting the view was. I tried my best with the vantage point provided (which is really no vantage point provided). Before this point on the creek, the creek is actually rather narrow, and it is only now just beginning to widen considerably. You may also notice that hidden at the crest of the falls is another drop just above this wider crest. I was amazed at how secluded that drop was, but alas, there was no way to get a better view of the drop. The rock walls begin to climb dramatically at that point, and you end up standing above the falls at a considerable height. You will hear the falls below, but you will be unlikely to see them very well.

Where in the World is Waterfall #1?

The third major drop in the Cascadilla Gorge (May 2009)

Of the three waterfalls I saw in the Cascadilla Gorge, the third waterfall in was my favorite. The bridge crossing over the river is very picturesque and scenic, and just added to the beauty of the waterfall. The waterfall itself is not that tall, though it is still very enjoyable. If you look on the left side of the picture, you’ll notice the trail that leads up the gorge, and that trail passes directly next to the falls. The trail past this point looked a little less safe, which is likely why the gorge was closed in early May.

Note: The Gorge Trail may be closed until mid-May. When we visited in early May, it was essentially closed, though I did see the first three falls. After that, we turned around.

Accessibility: 8/10 (easy/moderate, I haven’t experienced the whole hike, but I gather it gets much less accessible as you continue on.)
Height: 15′
Length of Hike: 0.4 miles round-trip

Where in the World is Cascadilla Falls #3?

I say that because I entered the park on the gorge trail at the W. King Road entrance, and then hiked downhill. That meant Buttermilk Falls was the last waterfall that I saw. This means a more strenuous hike back uphill if you choose to do this. On the other hand, if you just want to start at Buttermilk Falls and then make the decision to hike to see the other falls, start at the lowest entrance, which is also probably the easiest to find.

Where in the World is Buttermilk Falls?

There are numerous, numerous waterfalls in Buttermilk Falls State Park in Ithaca, New York. It would definitely be helpful or even cool if they named each of the different waterfalls something…different. First off, Buttermilk Falls is one of the most common waterfall names. Second, it would be easier to identify the falls if they actually had a name!

I’ve called this one waterfall #6. It’s by no means the largest of the falls in the park. It’s actually one of the smallest, but it’s still pretty nonetheless. The whole park is beautiful. The Gorge Trail, where the falls are best viewed from, is open during certain times of the year, though. Luckily, when I visited the park in early May, it was one of the only parks to have the gorge trail completely open. Most of the other state parks with waterfalls and gorge trails still had the trails closed.

One more thing about Buttermilk Falls: the park has a rather steep incline. If you enter from the W. King Road, the way down is not bad at all. The way back up is tougher. The opposite is true if you enter from the other entrance. Beware! The best way to view the falls would be to start at the W. King Road entrance, descend down to the other entrance, where somebody could pick you up.

Where in the World is Waterfall #6?

If you’re looking for the tall waterfalls, Taughannock Falls should be high on that list. It isn’t even the tallest waterfall east of the Mississippi River, which is often considered a dividing line for waterfall classification. There are other waterfalls that are taller, including Upper Whitewater Falls in North Carolina. Taughannock Falls is in the tall category because it is one of the largest single plunge falls east of the Mississippi at over 200′, though one or two others may be larger.

Does that mean that Taughannock Falls is one of my favorite falls? No…It’s tall, but height isn’t everything. Taughannock Falls doesn’t have a whole lot of complexity, which I think is what makes waterfalls interesting. The far more interesting aspect of Taughannock Falls is the amazing gorge it has carved. At some points along the hike to view the base of the falls, you’re actually in a gorge that is something like 400′ above you. The rock formations are truly spectacular. It’s mindblowing to think that this falls has created such an interesting gorge.

Directions (to view base of the falls):

There is another view of the falls from above. To get to this viewpoint, continue north on NY-89 a short ways to Taughannock Park Rd. and turn left. From there, head a ways to the viewpoint, which would be on the left if you’re heading west.

Taughannock Falls in May 2009

Where in the World is Taughannock Falls?