Milford Sound is one of my favorite places on the planet. There’s a stunning beauty to the location. And for a waterfall lover, there are no lack of waterfalls in the sound. Bridal Veil Falls is right next to Fairy Falls, and then you can find Bowen Falls, Stirling Falls, Palisade Falls, and other Milford Sound Waterfalls in the sound itself. The best way to view all of the falls is to take a cruise (or kayak if that sounds exciting). I took a cruise later in the day, and it was perfect. In addition to waterfalls, I saw a significant amount of marine wildlife, including seals and dolphins/porpoises. It was definitely a wonderful visit, and I’m ready to go back again!

The Chasm sounds more daunting than it actually is, as if you’re looking into an abyss. Instead, what you get is an interesting hike in Fiordland National Park, with a few waterfalls added in.

The only issue is that there isn’t really a great way to get any shots of the waterfalls. The picture below can’t even remotely do the waterfall justice, as it is bigger than it appears…but it’s still not amazing. If this waterfall were isolated, I wouldn’t suggest going out of my way to see it. Luckily, other falls such as Christie Falls, are right nearby.

Where in the World in The Chasm? 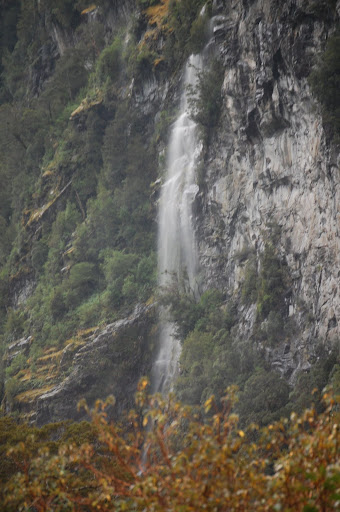 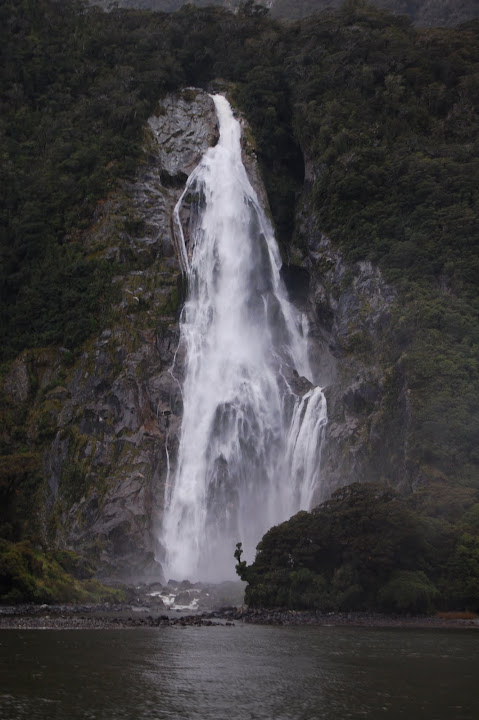 Milford Sound is one of my favorite places on the planet. There’s something wildly spectacular about seeing peaks rise 1 mile from the sea level. And the waterfalls that you’ll see are equally as spectacular.

Two of the falls in the sound are considered to be year-round, Stirling Falls and Bowen Falls (sometimes called Lady Bowen Falls). At 530′, Bowen Falls is breathtaking. You can get hints of the falls by exploring the trails west of the parking area, but your best views are by boat! It’s definitely worth every cent you spend. You will pass by Bowen Falls on your way out, and you’ll get an even better view coming back to the dock. During the cruise, you’ll likely see dolphins and seals. The sun may appear and disappear consistently throughout the two hours on the cruise. This can lead to a number of different photographic opportunities. (And you will want to dress warmly. In early May, it was chilly at times.)

From what I understand, there used to be a trail that led directly the base of the falls, but it has been closed for some time due to rock slides.

Where in the World in Bowen Falls? 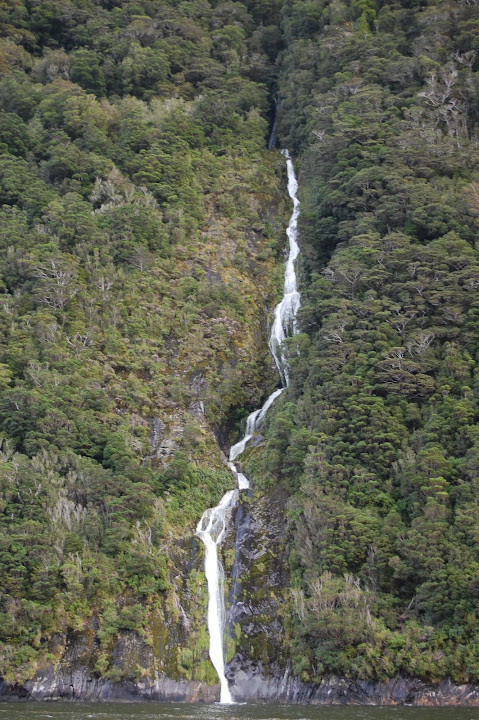 One of the waterfalls in Milford Sound (May 2011)

Up until this point, I haven’t listed these waterfalls on any list, and I’m not sure why. When you visit Milford Sound, which you should do sometime in your life, you should take a 2 hour cruise through the sound. You’ll see wildlife, stunning views, and a significant number of waterfalls. Many of them show up only after it rains, while others are more consistent. You can check out the ones that have been clearly named, such as Bowen, Bridal Veil, Fairy, Palisade, and Stirling Falls. And yet, there are a number of other waterfalls that seem to last longer that haven’t been named, or if they have been named, there names haven’t been advertised very well.

So I’ve decided to include them, since they are in such a beautiful place, and are equally as scenic as some of the named falls. There’s not a whole lot of description required. I’m a really bad judge of height, but each of these is in the hundreds of feet tall! If you take the cruise, you’ll see eight or nine falls during sunny periods, and I’ve heard it increases even more so while raining. It’s a reason to take a cruise while raining! 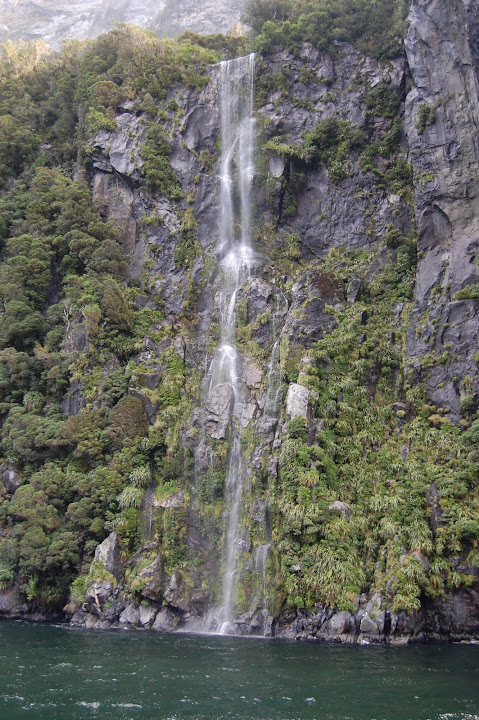 Where in the World are the Waterfalls of Milford Sound? 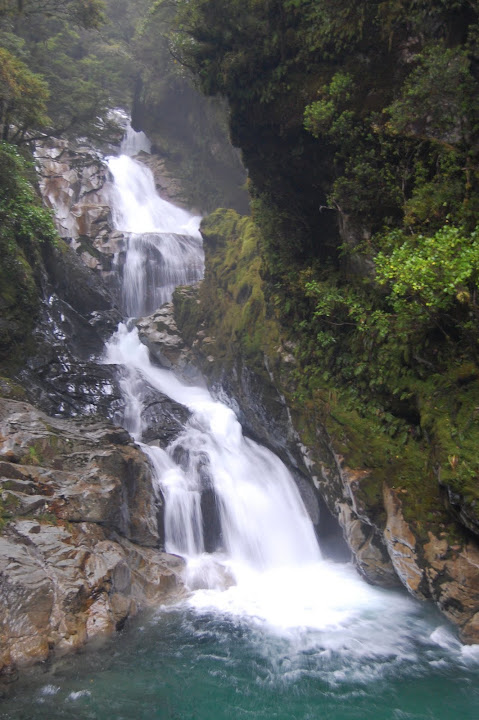 Fiordland National Park is probably one of my favorite places on the planet. There is something stunningly beautiful about the region! I honestly cannot wait to go back and visit New Zealand sometime, and I recommend that anyone that visits go to see at least part of Fiordland.

Milford Sound is not to be missed, and about 17 miles outside of Milford Sound is this impressive waterfall, Christie Falls. Because there are so many other impressive and tall waterfalls in the area, this sometimes gets left behind, but it shouldn’t be. It’s extremely scenic, and adds a little bit of variety to the waterfalls you’ll likely see along the way. Humboldt Falls, for example, is much taller, but is also thinner (or maybe it just seems like it from afar!). Christie Falls has its own unique character. It’s also pretty easy to visit, found directly off of NZ-94. You’ll already be on the road to Milford Sound, so why not stop?! And if you miss it on the way there, you should be able to see it on the return.

Where in the World in Christie Falls? 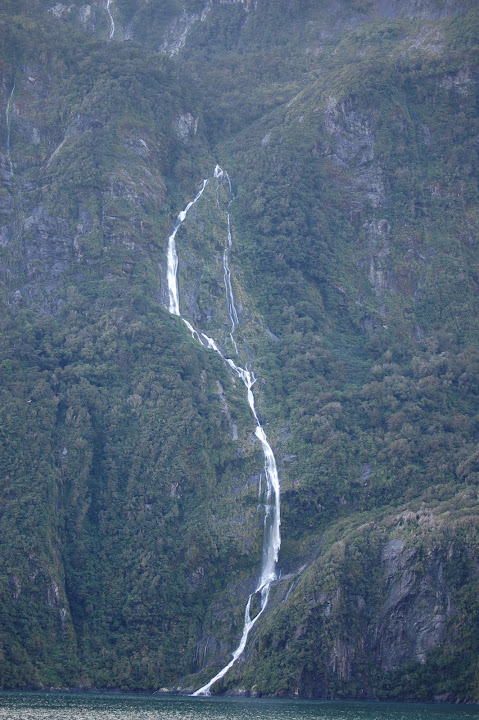 I have to admit, Milford Sound is probably one of my favorite places on the planet. The combination of the amazing peaks thousands of feet above sea level and the multitude of waterfalls, not to mention the wildlife, all make for a really wonderful experience. I’m not really sure that I wanted it to end, though it was just a teensy bit chilly.

The two hour (or so) cruise around Milford Sound is definitely worth it. We saw dolphins and seals, went under waterfalls (Stirling Falls), and had a jolly good time. Palisade Falls is one of those waterfalls that is hard to miss, though nobody on the cruise specifically mentions it, as far as I can remember. It might be on the guided sheet.  One website seems to indicate a height of at least 180′ (55 m), though it also suggests another 25 m portion, for a total of 260′. I guess that seems like an appropriate height. It seemed pretty tall, to say the least. And while many of the waterfalls disappear quickly after the rain, this seems to be one of the more constant waterfalls in the Sound. 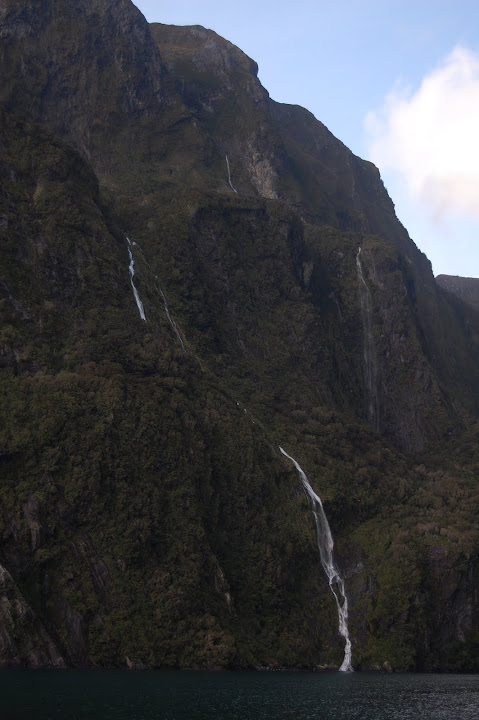 Another view of Palisade Falls, making it seem even taller than 260′ (80 m)

Where in the World in Palisade Falls? 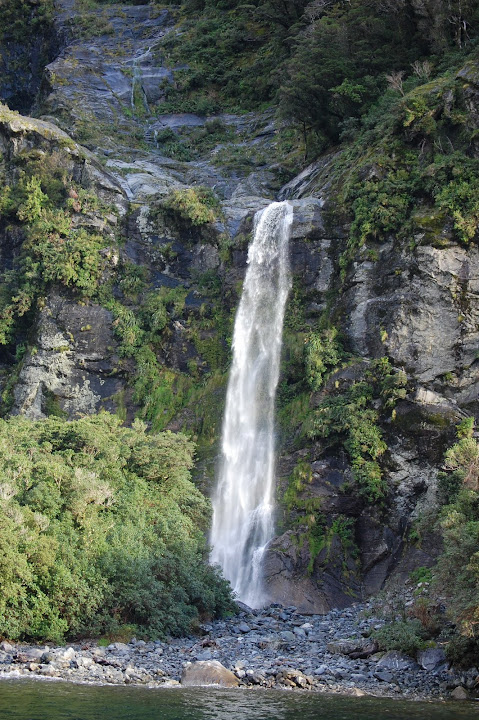 There are two different Bridal Veil Falls in New Zealand (possibly more, since it’s a popular name for a waterfall). This is the one found on the South Island in Milford Sound. If you want to know more about Milford Sound, check out my post on Stirling Falls.

Even on a relatively dry, sunny day, you’ll see a number of pretty impressive waterfalls. Stirling Falls is one of the waterfalls that you will likely go under (intentionally) if you take the Milford Sound Cruise. On the other hand, Bridal Veil Falls is obvious, and yet tucked away enough that you’ll just be viewing it from afar. Milford Sound is absolutely amazing, and the falls, including Bridal Veil Falls, are no exception. Be aware, though, while you’re travelling relatively slow, you have to be ready to capture Bridal Veil Falls. Since you’re on a boat, the amount of time available is more limited. Renting a kayak might solve that problem? 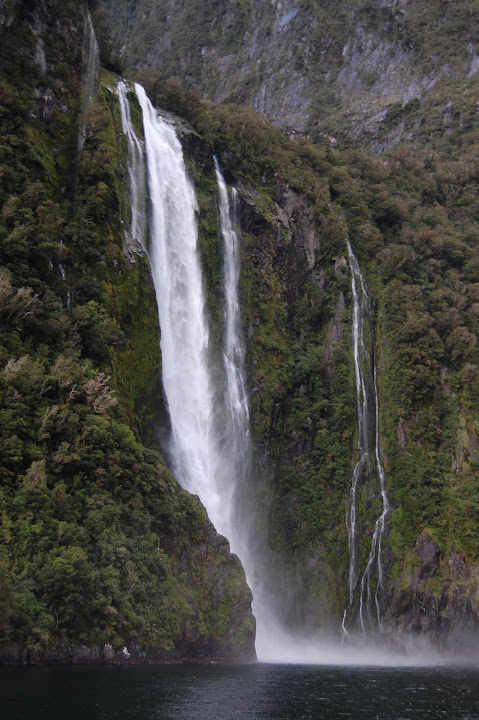 I haven’t yet posted anything about my visit to Milford Sound, and since Stirling Falls is the first waterfall I’m going to discuss in the area, I’m going to include my other impressions as well.

I was so excited to visit Milford Sound, and I was not disappointed.  The two-hour cruise in the sound (well, fjord, actually) was very impressive and there were a number of impressive waterfalls.  As they’ll inform you, there are many more after the rains come (and that’s pretty frequently), but even during the partly cloudy periods, you’ll still see many.

You can see many of the falls at once, and Stirling Falls is likely to be one of the last that you visit on your cruise.  It’s a really great waterfall, and you’re almost guaranteed to get a very close look.  And by close, I mean close.  Our boat navigated so that a portion of it was under the falls.  It was just cool enough outside that I didn’t readily rush into nature’s cold shower, but it was still memorable!

Where in the World in Stirling Falls? 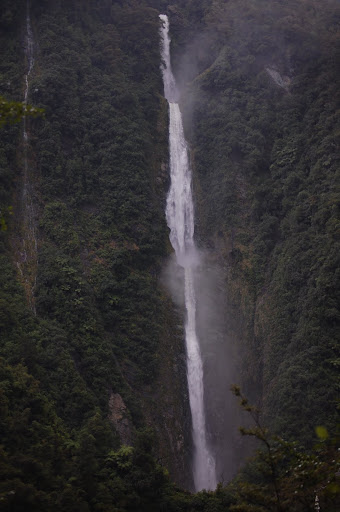 The first waterfall I visited after arriving in New Zealand was Humboldt Falls.  I was unsure how the drive to the falls was going to go.  Unlike many of the other waterfalls in the area, Humboldt Falls is not as easily visited.  If you are headed to Milford Sound, you will need to have your own car to get there.  It requires a drive down an unpaved road for about 18 km (12 miles), though the road is very passable.

The drive is the long part.  Once you’re at the parking area, it’s a 15 minute hike to the falls.  It is a steady uphill climb, though luckily it’s not very long.  At the end, you’ll reach a viewpoint.  There is the major waterfall, Humboldt Falls, just reaching 900′ tall.  It’s impressive.  A portion of the falls can’t be seen, as it’s blocked by trees.  There is another waterfall to the right of Humboldt Falls, at about half of the height.  To the left, there is a wisp of a waterfall that I have seen in other pictures.  All three falls add up for a very cool scene.  The best part about the falls is that it’s likely there won’t be anyone else there!!!!  I visited in mid-May (late fall), and there was no one else there.  Just a few miles further in Milford Sound, there were still a lot of visitors, so you’ll have peace and quiet here. 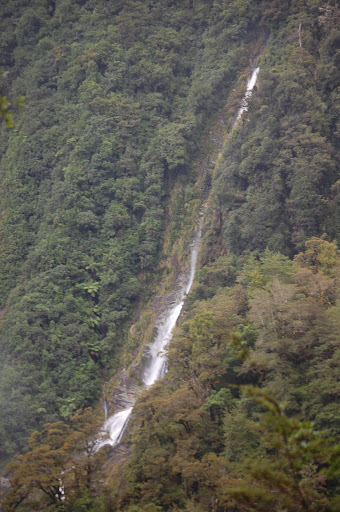 Waterfall to the right of Humboldt Falls

Where in the World is Humboldt Falls?