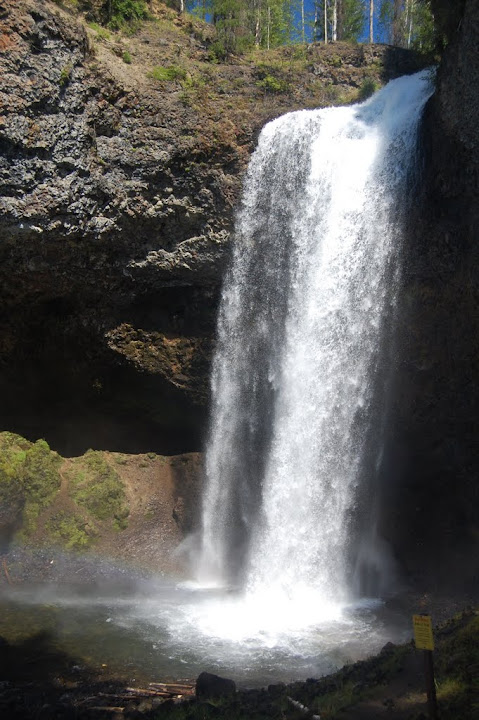 I’m sure there are a number of more isolated waterfalls in Wells Gray Provincial Park, but of the most widely known falls near Clearwater Valley Road, Moul Falls might take the most effort to get to. Compared to Helmcken, Dawson, or Spahats Creek Falls, you do actually have to hike to get to the falls. It’s an almost 4 mile round-trip hike.

I don’t remember it being a difficult hike (which I usually remember if I suffered!). The bear signs at the beginning of the hike did freak me out for a second, but there were a number of other people on the trail, that I would have been surprised to see any bears. I do remember that as you get very close to your destination, you will have to climb down some rickety-looking stairs to get to the base, but it’s well worth it for the final view.

When I showed up, it was very sunny, so the falls were very bright. The spray from the falls created a rainbow near the base, but when I tried to capture it in the photograph, the falls became extremely bright. I think there’s a mild hint of the rainbow in this picture. It was really an enjoyable hike, and it is nice to be able to get closer to this waterfall than the others in the park.

Where in the World is Moul Falls? 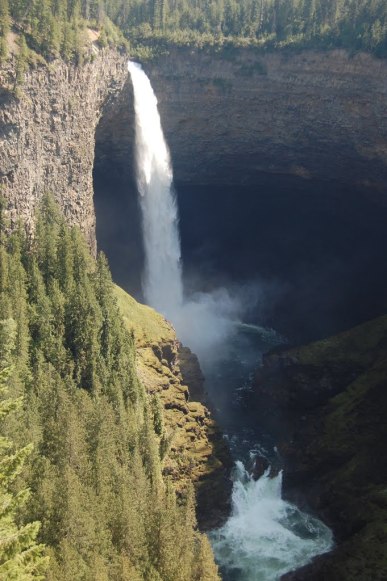 First, the flow of this falls is very strong, and that was visiting in August. I can only imagine the flow in May or early June. Second, the geology here is truly cool. The rock walls behind the falls only enhance the beauty. As I was standing there, I realized that there were extremely sharp drops. Even at the viewpoint I was standing at, you have to be very careful. It’s hard to explain Helmcken Falls in a way that appropriately creates the amazing picture that you see in front of you, so just go and check it out!

To check it out, there are different viewpoints. One of them is the viewpoint I was standing at, which is pretty far from the crest of the falls, but leads to impressive views nonetheless. You can walk along the trail closer to the crest, and some people seem to suggest it’s even cooler.

Where in the World is Helmcken Falls?