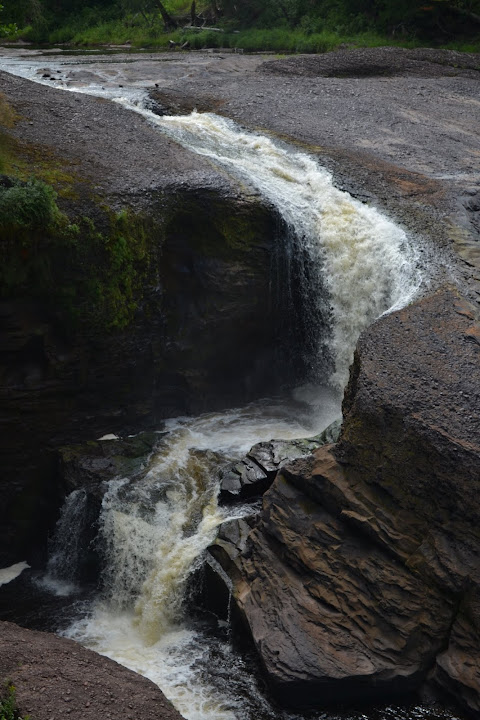 Rainbow Falls is one of my favorites, though it is hard to explain why. There are few other waterfalls that I have seen that have the same “drop” pattern found at Rainbow Falls. Instead of just a simple vertical drop or even a cascade, the water jettisons from the crest of the falls, which is very narrow. The water then crashes into a rock wall, takes an actual 90 degree turn, and falls into a cavernous region below. The actual view is extremely hard to explain in words. After the water pools, there is another drop, and possibly more hidden below.

The other four waterfalls are most easily accessed from their designated parking areas, but NOT Rainbow Falls. There is a parking area for Rainbow Falls, but if you follow this designated trail, it leads to one of the most unspectacular views of a waterfall I could ever imagine. At first, I was extremely disappointed, as I had just walked some distance only to have a waterfall almost completely blocked from my view.

There are two ways to remedy this situation:

Either way, both options lead to the much better viewpoint, which is where I took the photo. It might be better to arrive earlier in the day, as I was there later in the day when the sun was almost directly behind the falls, complicating attempts to take pictures. By that point, any picture would do, since for a period of time, I thought I wasn’t going to be able to see the falls at all.

One thought on “Rainbow Falls, Michigan”