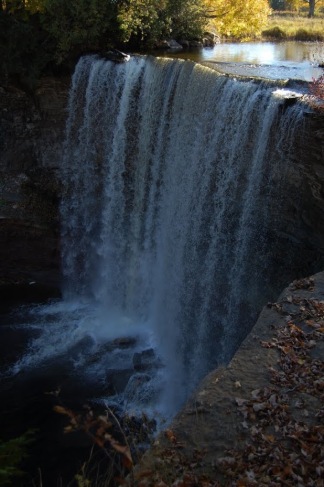 Indian Falls was one my favorite waterfalls in Grey County, Ontario. Not only was it accessible (as are most of the waterfalls in this area), but it seemed to be the least affected by humans, at least visibly. Some of the other waterfalls in the area show what human beings have done to change their surroundings, sometimes so much so that it strongly affects the waterfall that you see. Indian Falls doesn’t have that problem.

The falls are very pretty, and also rather surprising. If you walk upstream, there is nothing indicating that a significant drop is only a short distance downstream. When we showed up later in the afternoon/ evening, the sun was in the path of the viewpoint, and so it was rather difficult to get good pictures that didn’t have a lot of glare. When zooming the camera, I did have to cut out some of the surroundings, which was disappointing because of the beautiful fall colors around the falls. Better pictures may have been achieved from the base, but there really isn’t any approved trail down to the base, and the drop-offs are much sharper than they appear. I wouldn’t suggest trying.

Where in the World is Indian Falls?

One thought on “Indian Falls, Ontario”