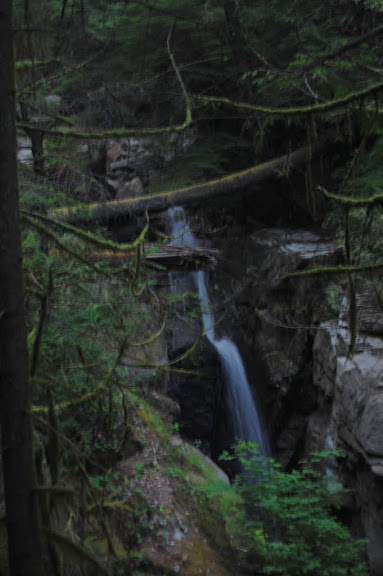 I spent some amount of time wandering around trying to find Cypress Falls. Cypress Falls Park is found in West Vancouver. It’s not too difficult to find, though at first, I was doubtful that I was allowed to park next to the park. The park is found in a very nice residential area, and I hope that nobody thought I was doing anything “bad”.

As you start walking along the trails, it’s probably best to not have any expectations of time limits.  In reality, it should only take about 15-20 minutes to hike to the falls…if you don’t end up on a completely different part of the trail. I definitely ended up walking on a portion of the trail that wasn’t leading anywhere specific. I realized that I wasn’t hearing ANY flowing water, which is not a good sign.  I finally decided to turn around and head back toward the parking area.

I decided to take a turn and was lucky enough to somehow find water, and I then followed the sounds to a portion of Cypress Falls. At that point, it was getting rather dark inside of the forest, hence the poor pictures. While the falls are not that big, it is an enjoyable hike. Even then, I still ended up exiting the park at a completely different point than where my car was parked, and had to hike down the street a ways to get back to the car. Be aware…there are no clear trail indicators.

Directions:
I would probably get better directions than this, but here seems to be the general idea.

Where in the World is Cypress Falls Park Waterfall?