Inglis Falls is one of the more impressive waterfalls in the Owen Sound area. It is rather unique, with the waterfall widening toward the base. It is also rather easy to visit, being only a few miles outside of Owen Sound. Driving there poses no difficulty, and other waterfalls are nearby (some smaller ones that aren’t always advertised widely).

Once you get to the falls, you may have to pay an entrance fee, though when we visited in late October, there wasn’t anybody collecting a fee. There is a major viewpoint where the picture was taken, which is great, especially when the sun is not shining right above the falls! If you cross the bridge above the falls, you may not necessarily get any good views. Now, there is a hike to the base of the falls, though it is not simple. At first, the hike is pretty clear, and then at some point, the trail essentially ends. You’ll have to bushwack and rock-hop to get to a great view at the base of the falls. It’s not terrible, at least compared to other experiences I’ve had…just keep track of the easiest way to get back to the trail. 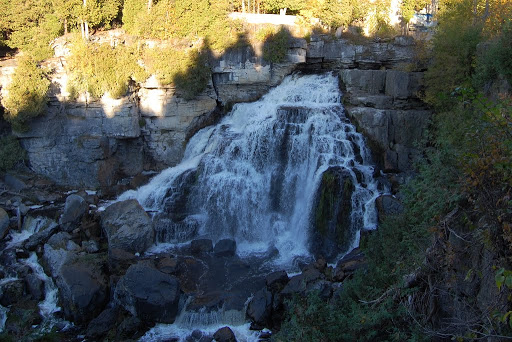 Where in the World is Inglis Falls?