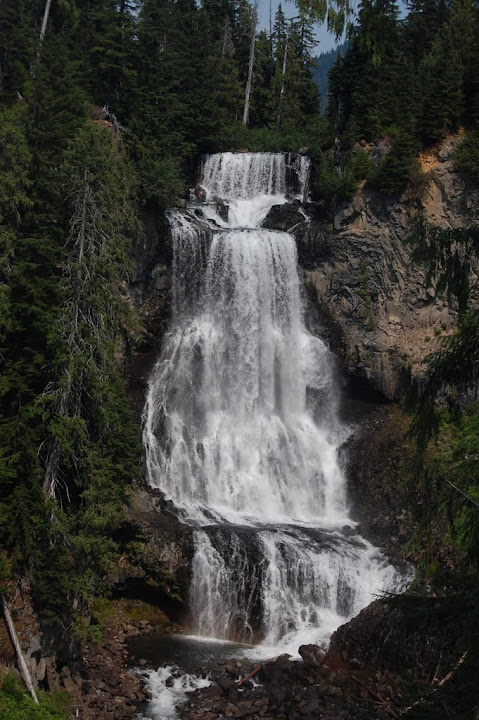 The trip to Alexander Falls could be described as interesting, to say the least. Alexander Falls is found very close to Whistler Olympic Park, where a portion of the Winter Olympics were held in 2010. Since the Olympics were coming, some new roads were built in the area, and some old ones were redirected. This is one way to create some confusion.

The old way used to lead one down a forest service road that was unpaved, but still could be driven on. The confusing part was when that road forked unexpectedly. I think part of the road was blocked off, and the only option was to go on a road that was very newly paved. This can be very odd at first, and I wondered if this was some private road. Considering it was the only option, though, I continued on the paved road. Luckily, I discovered that the falls were a very short distance from this intersection.

It also revealed there is a MUCH easier way to see the falls now. The Callaghan Valley Access Road (not forest service road) is a newly paved road that leads you directly to the falls, and on further to the Olympic park, which you can still visit. Once at the falls, you don’t even have to walk to the falls. Just get out of your car, and they’re essentially in front of you. When I visited in August 2010, I had the whole place to myself, not that there was a whole lot there. The waterfall is very scenic, and I was relieved to know that I wasn’t lost in the wilderness.

Where in the World is Alexander Falls?