I missed Bridal Veil Falls the first time I went searching for it…and I was staring right at it! Not that I would have been able to really tell. Bridal Veil Falls is extremely seasonal in nature. Of the three (maybe four) times I’ve visited the falls, I’ve only seen water flowing once. It actually baffles me that it gets so much attention compared to the more impressive waterfalls in the park.

The first time I visited, I took a picture of the cliffs, and then realized later that I had taken a picture of the spot where Bridal Veil Falls was, but there was really no water flowing. It was “wet”, but it just looked like any normal cliff. That was understandable, considering it was July or August, and it had dried up by then.

The second time I visited in May, and by then the waterfall had already dried up. I was surprised it had disappeared so quickly. The third time was the charm, and I finally saw the falls. If you look to your right while standing at the Miners Castle viewpoint, you might be able to see the falls if they’re flowing. They can also be seen from the Miners Beach if you’re looking at just the right angle. To get a good photo from any of those spots, you really do need a camera that can zoom in, as you’re still some distance from the falls.

I also hiked along an unofficial trial to see if I could get a better view, starting right near Miners Beach Falls. It was a very muddy hike, and in the end, I have to admit I really didn’t get any better views. I did get to see some other beautiful scenery, though. You might consider taking a cruise, but I wouldn’t bet on seeing the falls unless it’s been raining like crazy. Take a cruise to see the much more impressive and permanent Spray Falls. 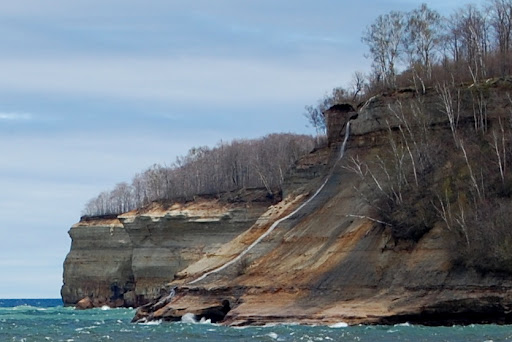