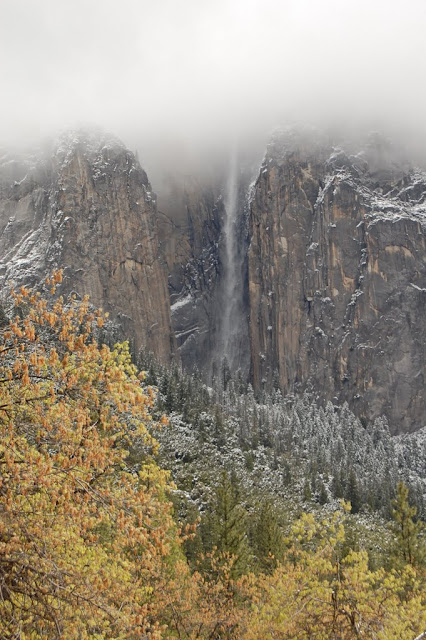 All right, let’s play a game…Ribbon Falls is: __________.  ethereal…fleeting…stunning. You choose your own words to describe what may be one of the most beautiful waterfalls in Yosemite National Park that you may never notice.

Ribbon Falls is almost guaranteed to disappear early on in the year, only undergo rebirth every year. The wispy falls aren’t gargantuan, even after the snow melt in early May. They’re wispy, blown away by the wind. I guess I must have been lucky when I saw the falls. Though it was mid-May, it had just snowed that night. The leaves were emerging from their winter sleep, and instead of deciduous greens, there were intense oranges and yellows juxtaposed with the green conifers still draped with snow. Clouds had descended on the valley, hiding the amazing Yosemite viewpoints, but this had the unintentional effect of deceiving the viewer. The falls appeared to emerge from the clouds themselves. It was a truly stunning and spectacular view.

Where in the World is Ribbon Falls?