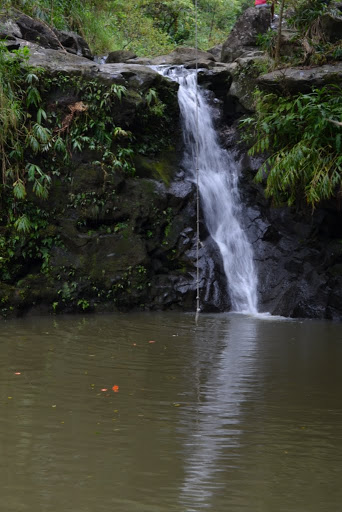 I arrived in Maui last night, being completely exhausted.  After going to sleep for a considerable amount of time, I woke up ready to tackle the road to Hana.  The first waterfall I happened to stumble upon was Lower Waikamoi Falls, but let me tell you about my view about the Road to Hana first.

Reading about it online made we wonder whether this was going to be one insane drive.  You can search online and read about all of these people that are apparently too afraid to drive on the road. But from my experience, this was no more difficult, dangerous, or “scary” than any of the other very curvy roads I’ve been on.  It is advertised as being 650 curves or so with NUMEROUS one-way bridges.  And there are a few points where you really can’t see a what’s around the curve. But I did not fear for my life.  I have driven on the less traveled highways of Puerto Rico and been more scared than here.  There I had garbage trucks speeding at me with very little room to maneuver.  At least on the road to Hana, they seem to warn you when that is about to happen.  It is also nowhere near as nerve-wracking as driving over the 12,000′ pass in the Rocky Mountain National Park, with only a foot or two between you and what seemed like a 2000′ foot slide downhill…Let’s just say that if you’re used to any curved roads, you’ll be more than OK.  I live in an area with some of the straightest roads possible, and I was still OK.  Just be careful!

Now there are a number of waterfalls along the Road to Hana.  I skipped Twin Falls, which might be the first falls along Route 360 (The road switches from 36 to 360.).  If I were driving by again, I might stop and visit, since I ended up at Hana around 3 pm with more than enough time to spare.  (I would recommend spending the night in Hana, if you can afford it, so that you don’t have to rush.  I left at 9:30 am, and made it just fine.)  So the first falls I actually stopped at was Lower Waikamoi Falls.

As with many of the falls, you’re essentially just pulling off the road, so be careful.  With Waikamoi Falls, you can see this falls without much difficulty.  There is another waterfall upstream, and for some reason I decided against pursuing it.  From what I’ve read, I believe you have to hike upstream, and I’m usually not for that. Depending on the time of year, photos show the falls with much more volume.  There was still some water flowing, though.

Where in the World is Waikamoi Falls?