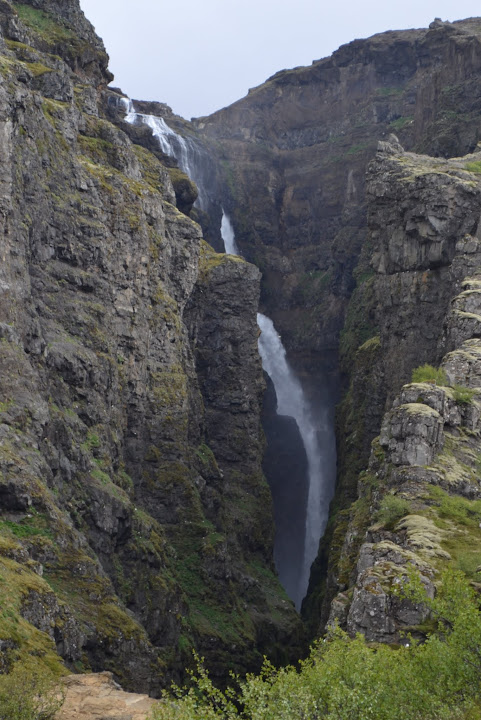 It’s taken me a while to get to writing about the waterfalls I’ve visited in Iceland, considering that I visited this falls, for example, almost two weeks ago.  But I’m finally getting around to it…

I’m starting with Glymur for a number of reasons.  First of all, it is a really impressive waterfall, and at about 640′, it is likely the tallest waterfall in Iceland.  Second, though, is that things seem to have changed very recently, at least in terms of the hike to the falls.  In Iceland, roads that are unpaved can only a short time later be paved, and signs can appear where none were before.

You’ll have to go out of your way to get to Glymur.  The drive around Hvalfjörður (instead of under it) is rather enjoyable, though it wasn’t very warm the day I visited the area.  Once you find the sign indicating the road to the falls, you have a journey down a rather bumpy, unpaved road, but it’s not terribly long, and only about 1 mile of it is very bumpy. (It can be done in a 2-WD car without any problem.)

I arrived at the parking area, and I was the only one there at that point, though it was relatively early.  It was amazingly peaceful, and you’re unlikely to find many other attractions in Iceland with so few people.  Previous guides have indicated that there are no signs indicating the direction to the falls, but that has now changed.  There are at least two signs indicating the correct trail to follow to the falls, and they’re not rinky-dinky little signs.  This helps greatly, and cuts down on the confusion.  If you’re unsure, though, looking for rocks with yellow paint on them. That indicates where the trail is, and further reduces the confusion.

After some ways, you’ll climb down through a cave, which is pretty cool, and not nearly as freaky as it sounds.  You’ll then hike a short distance, and cross the river Botnsá.  There is a log, along with a sturdy metal wire, to help you cross the river.  Again, it’s nowhere near as difficult as it sounds, though you will feel like an acrobat for a bit.

Then you start an upward climb.  How far up you climb depends on what you want to see and how daring you are.  Ropes and/or metal wire is present in many places to assist you along the sometimes slippery slopes.  At some point along the journey, you’ll begin to see the “whole” falls, though even that depends on where you stand.  I’ve seen pictures that people have obtained by hiking/climbing much higher, but this requires a love of heights that I don’t possess.  At least at some point along this upward journey, you can see a “glimmer” of the whole falls, which are really impressive.

There do seem to be paths that lead further up, and I did not explore those.  One of those might lead to better views, but be careful.  There also seems to be a trail that does not require going through the cave or crossing the river, but it is not clearly marked if it exists, and the views are apparently not as good.

Accessibility: 3/10 (moderate/difficult…it’s by no means terrible, but this hike does require some agility)
Height: 640′
Legnth of Hike: 3.1 miles round-trip

Where in the World is Glymur?