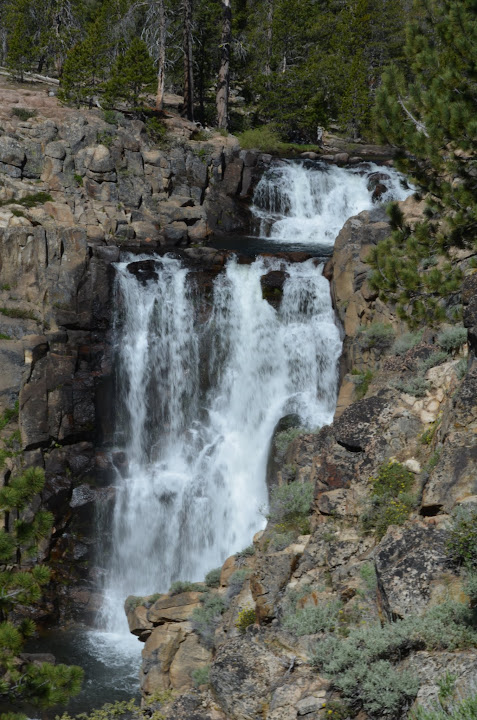 I traveled to the Reno/Tahoe region this past weekend. On Sunday, I had some time before heading back to the airport, and had stayed in Truckee. Of all of the waterfalls in the region, Webber Falls seemed like the easiest to visit in the amount of time I had available.

Webber Falls is about 15 miles or so outside of Truckee, though the drive is a little bit longer than that. The drive itself is really beautiful, and in the end you’ll be rewarded with a really great waterfall. I was actually more impressed with the waterfall than I originally expected to be. (One of the books that I was using as a reference has the worst possible picture of Webber Falls.) It is something like 75′ tall, and at the peak flow in late Spring, it’s really worthwhile. As an added benefit, I was the only person there. The bugs were rather annoying, though.

Now let me mention a few things about the falls that I feel I should mention before I forget. In both books I was using (which I think were newer editions), the directions indicate there is a dirt road that leads down to the falls. This is partially true, though this road is now blocked by boulders. This means you should park on the side of the road at a dirt turnoff. In the end, I actually think this is much more appropriate, as the final dirt road would not have been appropriate for a normal car. Also, the hike is not any significantly further from the road. Just make sure to follow the sound of rushing water.

Second, I don’t think I’ve seen much mention of how possibly dangerous the area around this waterfall could be. While the hike is very short, it leads to some very steep cliffs that are almost all around the falls. The terrain around the falls is not very firm, but surprisingly slippery. I could imagine some reckless people being careless suddenly slipping, only to find that there isn’t much distance to the cliff edge. I found that it was “easier” to head left to get better (and slightly safer) view of the falls. Be careful!

Accessibility: 7/10 (easy/moderate, the hike the falls is easy, but exercise extreme caution when at the falls)
Height: 76′
Length of Hike: 0.3 miles round-trip

Where in the World is Webber Falls?