If you’re a geology fan, Ringing Rocks County Park should be a doubly fun place to visit. Even if you’re oblivious to geology, this park will still likely interest you. Not only do the rocks ring, but there is also a waterfall, and both of these features are very easy to access. It’s definitely worth a visit if you’re in the area, and the whole region really is very beautiful.

From the parking area, the trail heads north, if I have my bearings correct. After a short distance, there is a fork in the trail. The left fork, which is very popular, leads directly to the ringing rocks. The right fork also leads to the ringing rocks, but then continues on to Ringing Rocks Falls. The ringing rocks seem to be the main attraction. Bring a hammer or two if it sounds interesting, and it does sound cool. At one point, I forgot where I was and thought I heard someone, like a metalsmith hammering metal. I then realized it was the hammer hitting the rocks.

At the same time, I’m not sure I would personally search out ringing rocks. It was neat to hear the rocks for a bit, but I had heard enough after just a short period of time. I was interested in the waterfall. There aren’t any signs until you get very close, and then it’s really faintly painted on a rock. You then quickly downhill over some rather large rocks and boulders. It’s not very difficult as long as you exercise caution. There has been a lot of rain in the past month in Pennsylvania and New Jersey, so I’m thinking that the falls were flowing better than they normally would in late June. The creek bed is very slanted, which might explain why the falls happen only in one “corner.” I found the orientation of the rock to be fascinating. I can imagine that the falls dry up later in the summer, so it is probably best to visit the falls in spring. 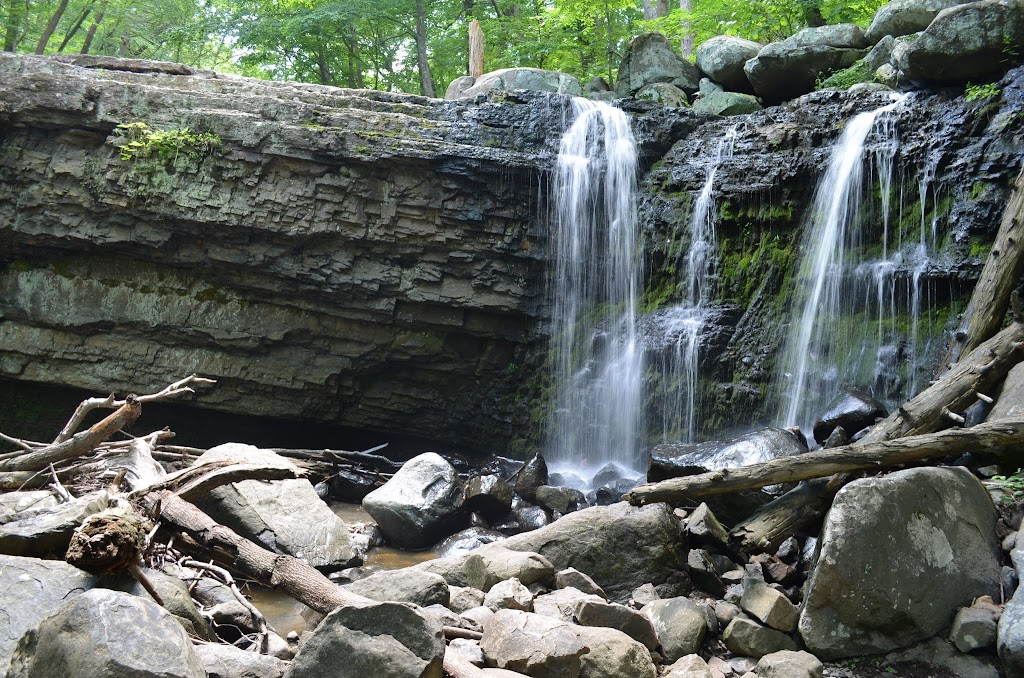 Where in the World is Ringing Rocks Falls?