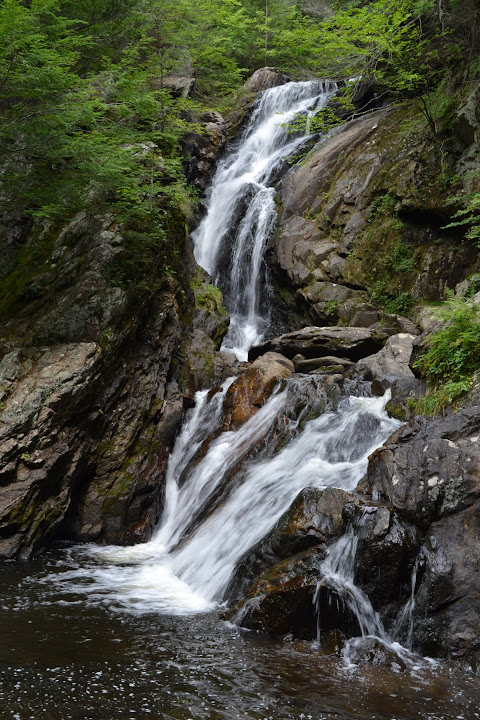 I’ve always been interested in geography, so Campbell Falls was very intriguing to me. I had been weaving back and forth between Massachusetts and Connecticut to visit various waterfalls, and Campbell Falls might have been one of the later stops during the day. Many of the falls up to that point had been rather disappointing, most likely because it was later in the summer, when many falls dwindle down anyway. I really wasn’t sure what to expect with Campbell Falls.

I’m in Connecticut, and then I enter Massachusetts. The road to the falls is just past the border. I drive down the road, and at one point, I think I’ve entered Connecticut again. At the parking lot, there’s a post indicating what state you’re standing in. I start the short hike to the falls, and just about halfway there, there’s another one of these posts. I really wasn’t sure which state I was in at that point in time. The falls are extremely easy to find, luckily. I had to go back to the map later to find out I was officially in Massachusetts.

The falls probably ended up being my favorite that day and throughout the whole trip. Bash Bish Falls was honestly just too crowded for me. The other falls often suffered from low flow. During the whole 0.4 mile round trip hike, I was essentially the only person at Campbell Falls. Somebody arrived just as I was leaving.  It was really cool to have the whole place to myself. And it helps that the waterfall had relatively good flow and was very scenic. In late summer, this waterfall might be your best bet for enjoying nature in relative solitude.

Where in the World is Campbell Falls?