I visited the Seattle region this past weekend, and I wasn’t exactly sure what to expect weather-wise. Rain would be predicted in the region, and it did rain. It was also predicted that there would be snow at higher elevations as the day progressed. This made me a little bit concerned. Being from Michigan, I’m no stranger to snow, but I also don’t enjoy driving in it! I decided, though, that I was going to head in the direction of Nooksack Falls, and hope that there wasn’t any snow in my way.

My worries weren’t really founded (though I still think you should pay attention to the weather, and turn back if you do think think it’s too dangerous). The whole drive the falls was wet, but by no means snowy. One book reports the elevation of Nooksack Falls at 2500′, but it is closer to 1600′. The book also suggests the height is something around 180′, where as it’s about 100′ shorter at 88′. While I’m not sure I’d trust the numbers, the directions worked. The falls weren’t at their peak flow, but they were still enjoyable.

Because people are royally stupid, and can’t seem to figure out that it’s extremely dangerous to try and find a path down to the base of the falls, there is a fence. Even with the stupidity, this is a good idea. While the fence might seem to create a difficulty in taking photographs, it’s really that the falls are at an odd angle from the viewpoint, and I don’t think you can avoid that, even if the fence weren’t there. While the photo I’ve included here isn’t my favorite, it’s the one that actually reveals that there are many parts to the falls. There even seems to be a “cave” where the river has eroded away rock. This is difficult to notice, and took me a few minutes to figure out there was this other part to the falls. 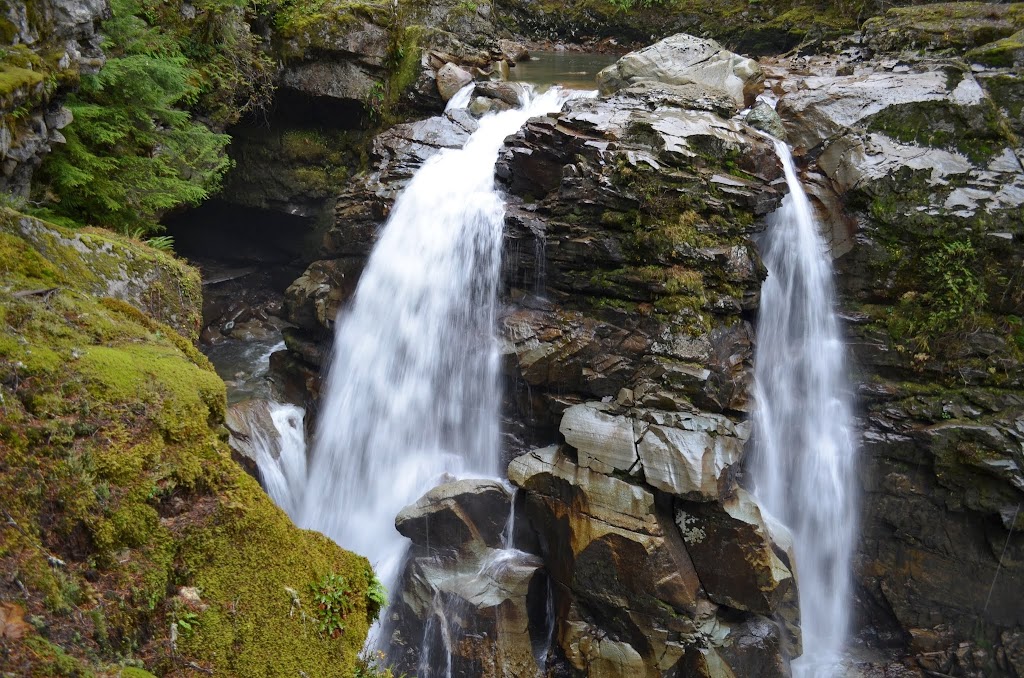 Where in the World is Nooksack Falls?