I’m getting closer to visiting waterfalls in most of the states, and I’ve just added Kansas to the list. Kansas is complicated, since many of the waterfalls there seem to be man-made, while others haven’t been reported because somebody just doesn’t seem to think they’re significant. As I searched even further, I found there may be a number of other smaller waterfalls that aren’t being advertised.

Cedar Lake Falls is advertised fairly well, at least on the website I found it on. It’s relatively easy to get to, though the Access Road to the falls is rather narrow (not as narrow as one of the other roads I was on!). It’s also relatively close to Kansas City, so it would make a great day trip. Cedar Lake is very popular for fishing, especially on a beautiful day, as was this past Saturday.

Cedar Lake Falls isn’t particularly tall, only about 5 or 6′. I’m guessing it probably dries up when the lake is not as full, as it is fed by overflow from Cedar Lake. There is a man-made structure above this falls, though it seems this is a legitimate drop created by nature (though I could be completely wrong). I’m not sure that I would go out of my way to visit just this one waterfall (even though it was very peaceful just to sit there and watch the water flow), but Cedar Creek Falls is nearby, and there might be another waterfall in Waterfall Park in Merriam.  The same link previously posted indicates there may be another waterfall in Olathe at the Ernie Miller Nature Center.  (As with many of these, it’s difficult to determine whether they’re natural.) In the vicinity on the Missouri side, you might also be able to visit some waterfalls at the Parkville Nature Sanctuary in Parkville, MO. I didn’t have a chance to visit many of these falls, since time was limited and I hadn’t even stumbled upon the link provided. 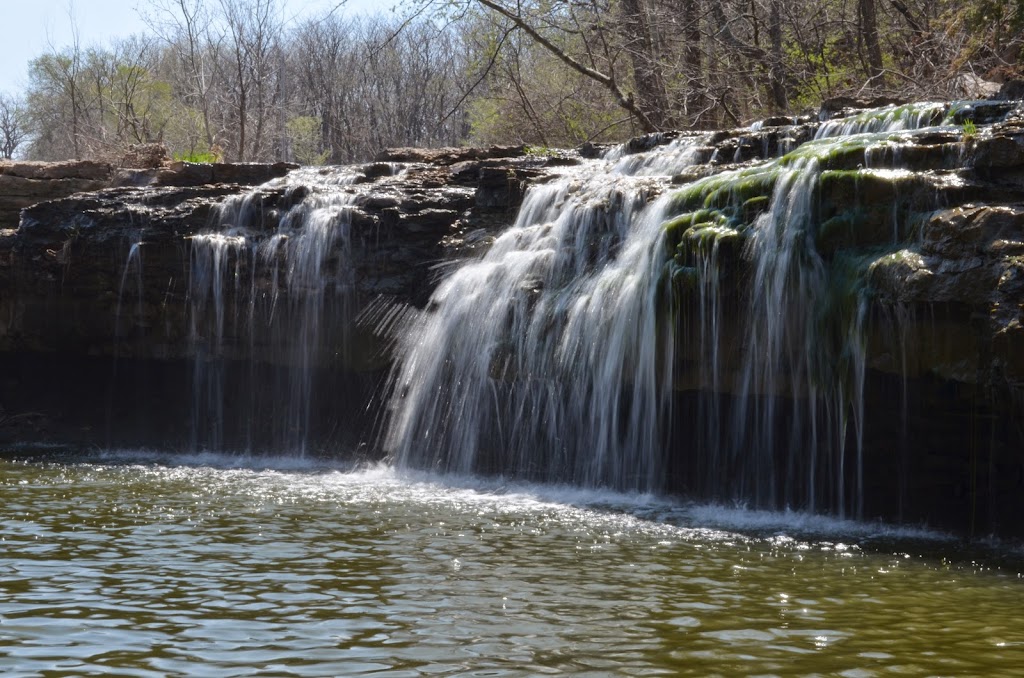 Where in the World is Cedar Lake Falls?