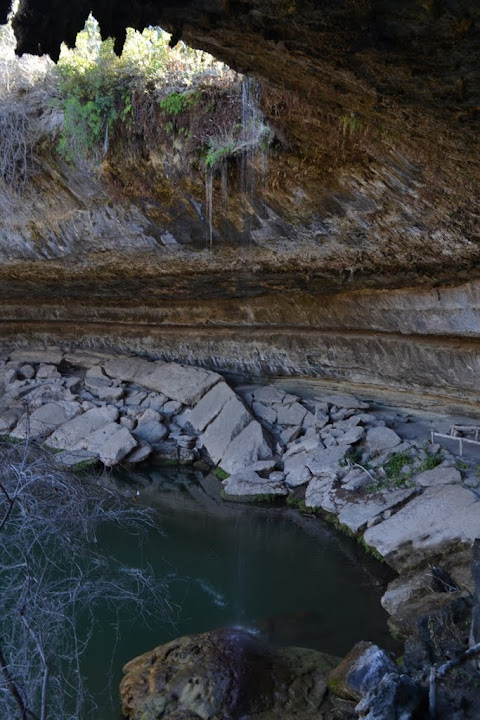 Texas does have waterfalls! That might not come as a shock to some, but for the 2nd largest state, it can be rather difficult to obtain a list of the waterfalls in the state. They aren’t all advertised particularly well. Many of these falls are found in the Austin area (or to the west). Pedernales Falls and McKinney Falls are the two most widely known in the area.

If you’re looking for an even less advertised waterfall, look for Hamilton Pool Falls. It’s not particularly difficult to find, as a county park is designated for the Hamilton Pool Preserve. The hike to the falls is very enjoyable, and the geology of the area is intriguing. A large overhang has been formed, so you can walk under/behind the falls, and I enjoyed photographing the rock layers above. In December 2011, though, there hadn’t been a significant amount of rain in the area for a while. If I remember correctly, the state had been experiencing drought conditions. Hamilton Pool Falls had been reduced to a trickle, though if you look closely, you’ll notice enough water was flowing to at least capture it was a waterfall! After an intense rainfall, Hamilton Pool Falls looks better, at least from the photos I’ve seen.

I would suggest checking the county website for updates on the falls if you’re planning on visiting.

Where in the World is Hamilton Pool Falls?