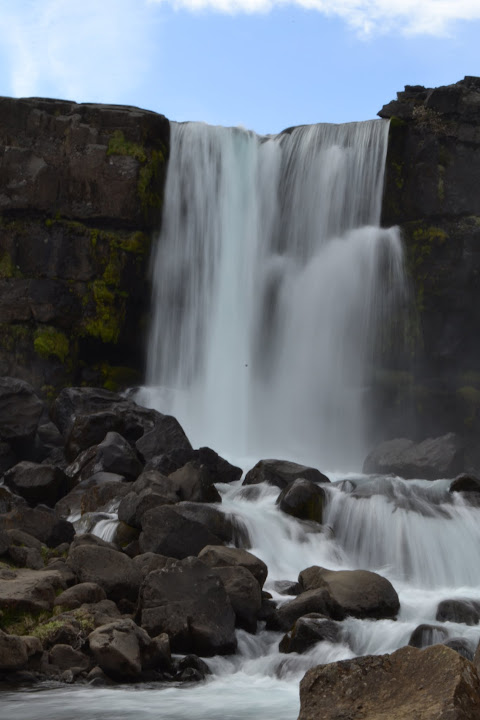 Þingvellir National Park is an important site to Icelanders. It’s where the first Parliament was set up (almost 1100 years ago), and Icelandic independence was later celebrated there (in 1944). Because of its importance, it’s been designated as one of the three sites on the Golden Circle, which also include Geysir and Gulfoss. Of the three main sites, it is probably the least busy of the three, and seems to have a calming effect. (And if you’re a Game of Thrones fan, parts of season 4 were apparently filmed in the park.)

As you’re wandering around the main site, you might realize from the sound of rushing water that a waterfall is nearby, but it’s out of sight. There’s a wall of rock hiding the waterfall. Once you figure out how to get into the gap (which is actually a geologic fault line), you’ll be rewarded with Öxarárfoss. To get to the gap, there is a parking area designated specifically for the falls on Road 36. You might also try the main parking area near the lake and church, and then try and find the correct trail to walk up the rock “wall.” Parking at the designated stop is the more “obvious” option. It’s a fascinating walk south through the fault line to get to the falls. At about 40’+ tall, this waterfall can be impressive, though it might not be the first waterfall stop in Iceland with so many other larger waterfalls!

Where in the World is Öxarárfoss?