I recently mentioned a waterfall that I couldn’t remember. In the case of Kadunce River Falls, I do remember the waterfall, but what I don’t remember is why I didn’t continue further along the trail. I know I visited the first significant drop along the river, but there are at least three other drops along the river, including one which the authors of the book I used dubbed Heart of the Earth Falls.

It could be that the authors of “Waterfalls of Minnesota’s North Shore”, the Wallingas, mentioned there were steep canyon walls? (It’s a question.) I don’t really remember, but I’m not a fan of big drops, so I might have turned around. I’ve done that before, though usually the drops are much larger in magnitude. Instead, it could be that I was just really tired by that point. I did take this photo later in the day, and had visited MANY waterfalls previous to this one. It may have also been that I had wandered further but hadn’t found what I expected to find. I’m guessing it was some combination of all three, though most likely the tired factor.

Just getting to the base of this waterfall required a lot of effort. I remember being worn out and sweaty after this one waterfall. It’s maybe 70′ to the base, and it’s rather steep, though more manageable than one might expect. There’s a cool and creepy cave right next to the falls. It was a lot of work to see a ~10′ waterfall, but I was determined to have a photo of something. This also gives me a reason to go back and check out more waterfalls along the North Shore. (I really want to go in the fall when the leaves are changing!)

Accessibility: 2/10 (to get to base, it’s very slippery, though possible…Be careful!)
Height: 10′
Length of Hike: 0.6 miles round-trip 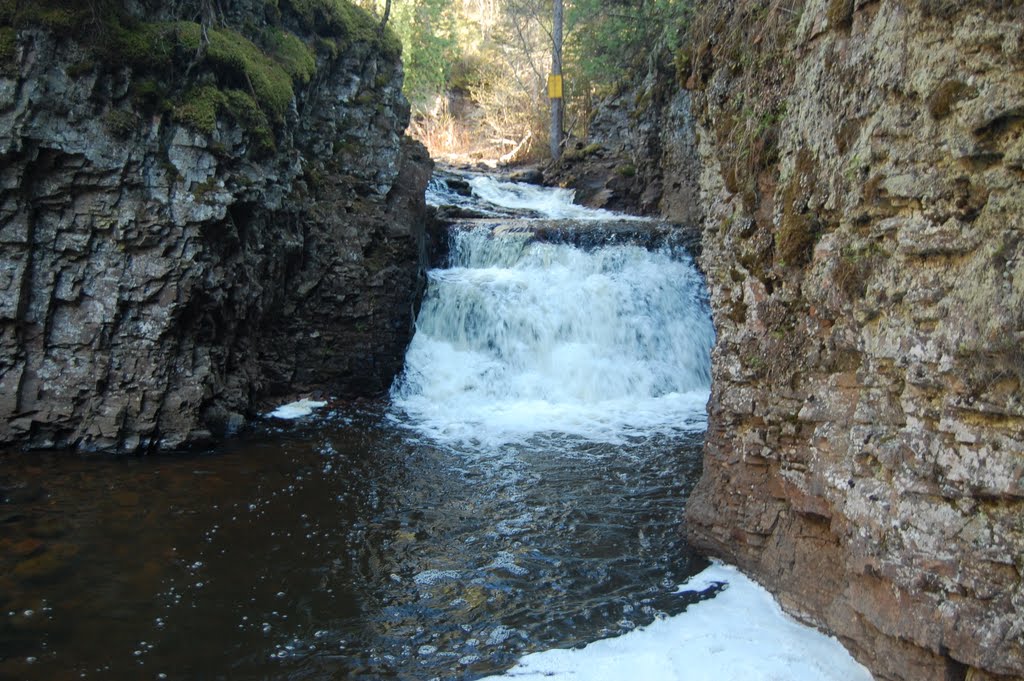 Kadunce River Falls in May 2010

Where in the World is Kadunce River Falls?