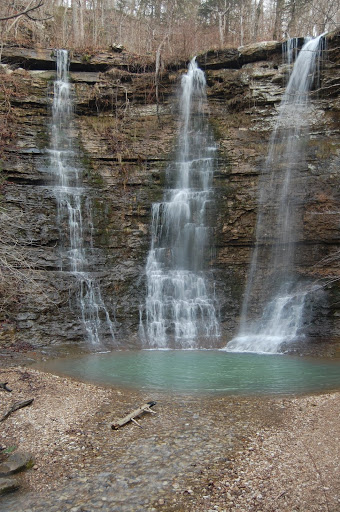 This may be the first waterfall that I can think of that changes its name! If you visit after a nice rainfall, you’ll see Triple Falls, with three separate ribbons of water. If you show up and it’s drier, you might only see two ribbons, and now you can feel free to call it Twin Falls. Makes sense, doesn’t it?

Getting to the falls is relatively easy, assuming you head in the right direction. I found what seemed to be the parking area for the falls, and started heading along what seemed like a nice trail. It didn’t lead anywhere (of interest). I kept hiking, and finally gave up. I really hadn’t walked that far, but I had to wonder. And then, I had this clever thought…let’s check the directions again. And after reading the directions, I realized that I might have left and right (or north and south) confused…something of that sort. By chance, I also noticed a sign. It said Twin Falls. Except there’s no Twin Falls in view, even though I hear something. I decide to go to the “other side”, hike a bit, and without much effort, I was viewing Triple Falls!

I’m pretty surprised I saw the Triple version. Many of the other falls in the area seemed rather sparse for March. Hemmed-In-Hollow Falls was almost water-less, as was Liles Falls. I was disappointed with some of the falls, but Triple Falls and Eden Falls ranked as my two Arkansas favorites (of the seven I viewed).

Directions:
1) From Jasper, head west along AR-74.
2) After driving for a few miles, turn right onto Camp Orr (or Kyle’s Landing) Road. There will be signs for Kyle’s Landing and the Boy Scouts of America Camp Orr indicating the turn.
3) It’s a downhill drive along a gravel road. I don’t remember it being terrible. After a mile, you’ll take a sharp right to continue on Camp Orr Road.
4) Drive down to the bottom of the hill, and look for a sign for Twin Falls just before you enter the Boy Scout Camp. It’s somewhere very near the entrance to your LEFT as you come downhill. I don’t remember the trail being extremely noticeable at first, but once you find the sign, it’s pretty straightforward.
5) Hike the short distance to Triple (Twin) Falls.

Where in the World is Triple Falls?: map