I had somehow misread how far I was going to have to hike to view Wapta Falls. I thought it was a roadside waterfall, so when I arrived to see a sign that said it was a 2.4 km hike, I hesitated for a very brief second. But then I thought to myself, “It’s early, the first hike of the day…This shouldn’t be any issue.” And it wasn’t. There are parts of the hike that are more uphill and downhill that I might have expected, but it was totally worth it. The reward is a 330′ wide waterfall. The height is said to be 100′ tall, but I’m inclined to agree with the World Waterfall Database that about 60′ seems more like it.

Wapta Falls is still massive in size. I might not completely trust the sign at the trail head concerning water volume, but I would hazard to guess it’s in the top 5 in Canada. Just having a lot of water flowing over doesn’t necessarily make a waterfall interesting to me, though. What I found fascinating about this waterfall was the variety of different viewpoints that produced uniquely different photographs. When you’re above the crest of the falls, you’ll probably get the most complete view, except for the far right portion of the falls.

If you continue down to the base of the falls, you’ll struggle to completely see the falls, but you’ll get some interesting view of the falls with the mountains in the background. And if you climb the “rock island” directly in front of the falls, you’ll be able to see most of the falls in amazing detail, but you’ll have about 1 second to take a photograph before your camera and/or glasses are just completely covered with spray from the falls. There’s another point on the left side where there’s an opening in the “island”, and you can actually view the falls free from spray, though that may have been due to wind conditions. It’s a really fascinating waterfall, and with Takakkaw Falls (at 1200’+) nearby, it’s a great waterfall day.

A note about directions: I lucked out. The book I had made it clear that there was no access to the Wapta Falls Road if you’re headed WEST along Trans-Canada Highway 1. (If you knew the correct location, you might be able to turn, but there’s no sign in the westbound direction. I was in Golden, BC, so on the way back on the eastbound route, the sign was very clear. If you’re headed west, there is a place to turn around a few kilometers later. 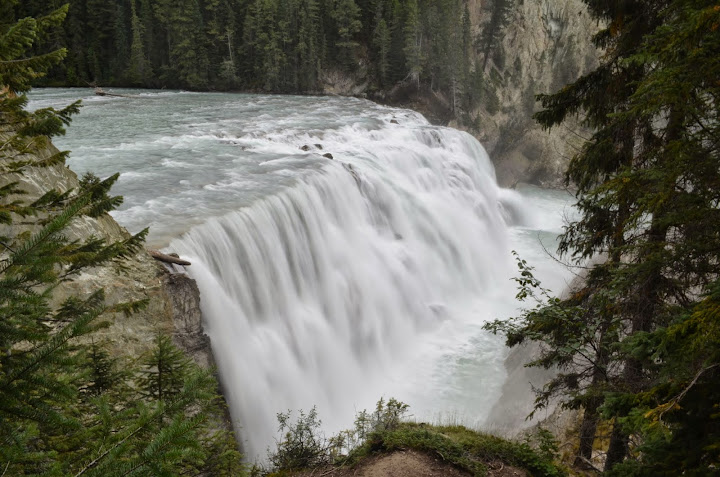 Wapta Falls from above the crest (September 2014)

Wapta Falls from the base

Where in the World is Wapta Falls?