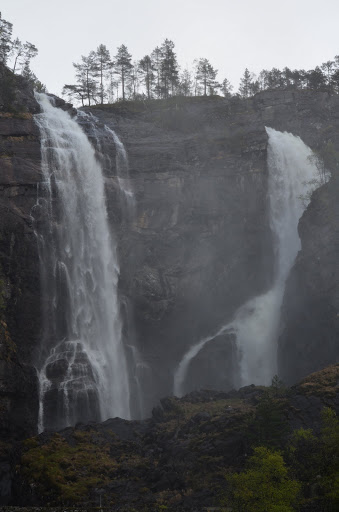 After visiting waterfalls, I often post the first waterfall that I saw in that state/country. In this case, it’s a bit more complicated. Norway has too many waterfalls to keep track of. On the second day I was in Norway, I took a fjord cruise, and there were so many “small” waterfalls along the way. Some of these waterfalls along the fjord cruise through Osterfjord were rather tall, but they weren’t very wide…and in Norway, with an abundance of waterfalls, to be named (or to be advertised), they have to meet multiple requirements.

I haven’t sorted through all of the photos yet, so I’m sure I’ll be posting something about these other waterfalls, but I figured I would start with the one named waterfall I saw on this cruise, Hesjedalsfossen (or Heskjedalsfossen on some sites). After looking at the notes I had printed about waterfalls before heading to Norway, I realized there are multiple ways to visit this waterfall. The fjord cruise might actually be the easier option. The alternative, provided here, requires a drive down some rather narrow roads. (Though even some of the “main” roads in Norway are surprisingly narrow, but I hadn’t discovered that yet!)

I saw this waterfall on the Rødne Fjord Cruise, which starts in Bergen. You won’t see this waterfall every time you take this cruise, as it apparently is only visited during the 3.5 hour cruise, which sails around the island Osterøy. The 3.5 hour cruise doesn’t cost any more than the 3 hour cruise, so I would say it’s worth it if you have the time. I did almost fall asleep near the end of the cruise, but my body was still adjusting. Instead of listing directions, I’ll list the link for the cruise below.

Where in the World is Hesjedalsfossen?