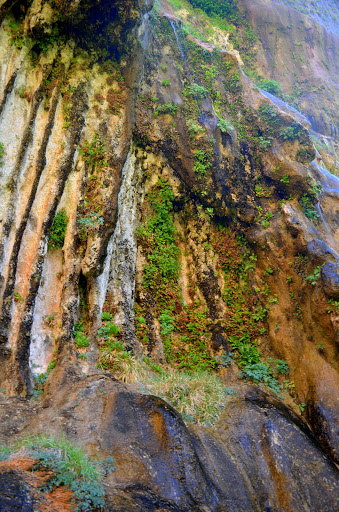 Weeping Rock Falls in May 2015Evee

With Weeping Rock Falls, there could be a discussion about whether to include this as a waterfall, but I’ve decided it’s more waterfall than some other waterfalls I’ve seen. The Weeping Rock is this landmark in Zion National Park that must have water emerging from it year-round, causing it to seem like it weeps. It’s an interesting stop along the shuttle path.

The falls aren’t particularly tall or wide or voluminous. There is enough water, though, that you can hear a stream below. It also leads to some beautifully lush green plants growing on the rock wall, adding even more color to the landscape. Now, if Weeping Rock Falls were all by its lonesome self, I wouldn’t even remotely stop to visit. But because it is a very easy stop along the scenic road, and because you can also get some spectacular view of the canyon from here, I would definitely recommend stopping, even if the falls themselves don’t seem wildly exciting.

Where in the World is Weeping Rock Falls?