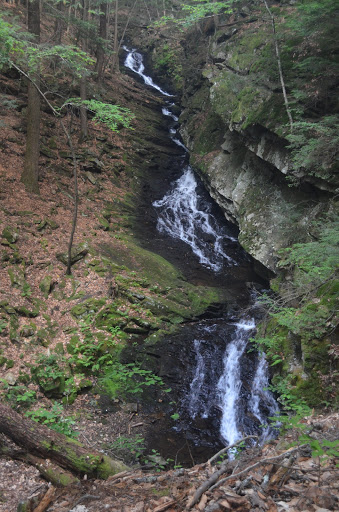 I was surprised by how nice Chesterfield Gorge was. I had expected the waterfall here to be nothing particularly interesting, and I actually thought it was nicer than indicated.

Chesterfield Gorge isn’t a particularly big gorge. There is a total elevation change on the hike of maybe 200′ or so. And yet, it’s a pretty easy hike, along with being very easy to get to. As you’re hiking down along the trail into the gorge, nothing looks particularly big. You’ll see a number of singular drops. It’s not until you’re at the end of the trail that you’ll notice that some of the drops can be seen at the same time, leading to a bigger waterfall, which is approximately 120′ in height. And for a waterfall in mid-July, it was flowing fairly well. I’m sure that if you show up earlier in the summer, you will likely find something more interesting, but it was still an enjoyable stop.

Where in the World is Chesterfield Gorge Falls?