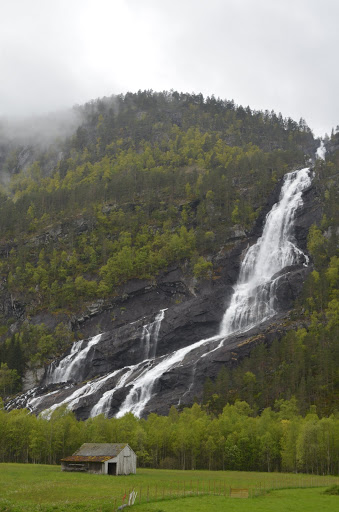 Norway has an abundance of waterfalls, and anywhere else this would probably be a stop of its own. And yet in Norway, Vidfoss is just another waterfall. The major waterfall along this portion of Norway Route 13 is Låtefossen. Låtefossen has its own parking stop. On the other hand, Vidfoss doesn’t have a designated parking area or even a designated stop.

If I remember correctly, I had to very quickly pull over to the left side of the road as I was headed north. This required that I found an area that had enough space along the side of the road. It also required that no cars were coming in either direction. Considering how narrow this road is, that seemed like a feat in and of itself. (The road at this point is rather “wide”. It later gets narrower and narrower until it sometimes seems like a one lane road!) After pulling over, I quickly took a few pictures and then went on my merry way! It was an enjoyable stop on a rainy day.

Where in the World is Vidfoss?