I often don’t write about waterfalls until years after I’ve visited them. I try to hit a variety of different geographical regions along the way, but in the process I often forget about some waterfalls, at least certain details. I remember a bit about Pikes Falls, but other aspects are a bit fuzzy.

I visited in July 2015, and stayed near Stratton Mountain. It’s a beautiful area, though a bit quiet during the summer. On the way out, I had a few waterfalls on my list including Pikes Falls and Hamilton Falls. This was my first stop, as it’s not far from Stratton Mountain. The directions that others give are what tend to throw me off, as I approached it from the opposite direction. I remember the road being narrow but quiet, and I don’t remember there being much difficulty finding the parking area for the falls. I don’t recall much of the surroundings, nor the very short hike. (Sometimes short hikes are nice, but they stick in my head less than the tedious hikes!)

The falls are smaller, though there are definitely a number of different views to be had. Since the hike is easy and short, it’s worth your while to stop if you’re in the area. Otherwise, there are other larger falls in the area. Many people seem to enjoy this waterfall for the pool below, perfect for swimming. 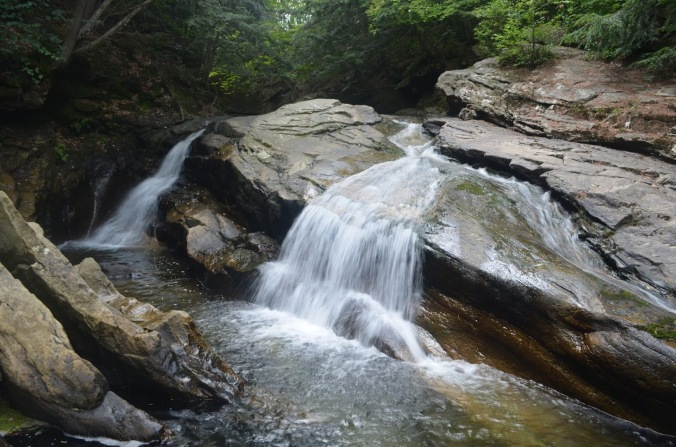 Where in the World is Pikes Falls?

One thought on “Pikes Falls, Vermont”