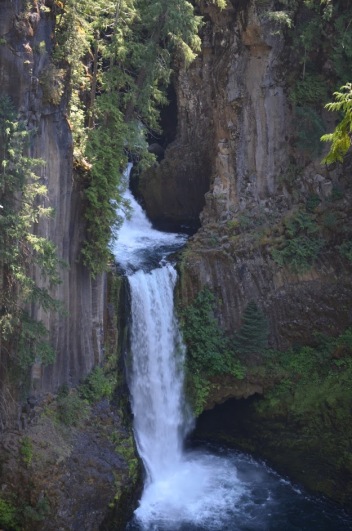 Oregon has so many beautiful waterfalls, and Toketee Falls is another one to add to the list. I flew into Eugene five years ago, with the goal of visiting Crater Lake National Park. There are a number of falls in the park, but there are also many falls along the way to the park. Toketee Falls was one of those stops along the way back to Eugene.

I thought the hike to Toketee Falls was a bit longer than it actually is…goes to show what happens in five years. At 0.75 miles round-trip, it’s a pretty quick jaunt to the falls and back. I don’t remember it being a difficult hike, though I do recall that there were some stairs that led down to a viewing area. The viewing area has a somewhat steep drop near it which made me a bit dizzy (as someone who’s not a fan of heights). I have read that some people have made it to the base of the falls, but it’s something I would in no way attempt. I’m not that brave! You are a bit of a distance from the falls, so it might be wise to bring a zoom lens. It will also allow you to get some better shots of the fascinating basalt columns surrounding the falls.

Where in the World is Toketee Falls?