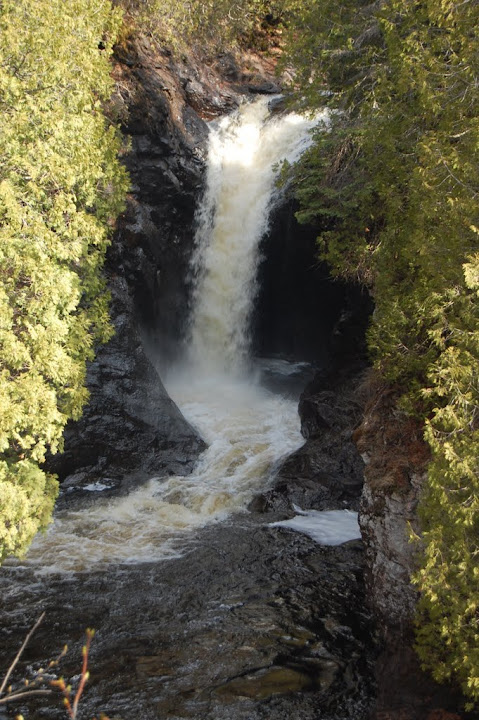 The first waterfall that you encounter on the Cascade River is logically called Cascade Falls. Further beyond that are The Cascades. This first falls is a rather short distance from the trailhead, and it is definitely worth it to go and visit both “sets” of falls.

Unlike the Cascades, which is a complex set of…cascades, Cascade Falls is an actual plunge waterfall. I visited the falls in mid-May 2010, and the falls were at their prime then, most likely due to recent snow melt. (It had actually snowed just three days before, though that disappeared pretty quickly, and the temperatures returned to a state of relative comfort.) I imagine these falls are probably less impressive in the depths of the summer, but the hike is still enjoyable. The best view of the falls is found on the left side of the river (as you start).

Where in the World is Cascade Falls?

The North Shore of Minnesota has a nice variety of waterfall settings. Some of these waterfalls require longer hikes, whereas others are very accessible. Obviously, those that are more accessible are the most frequently visited. Gooseberry Falls, a very nice set of falls, is probably one of the most popular. The falls on the Split Rock River are probably the least traversed. The falls on the Cascade River fit somewhere in the middle.

The Cascades refers to a group of falls that can be viewed from a specific vantage point along the Cascade River. These falls are upstream from Cascade Falls. At least three falls can be seen from the bridge over the river. The first falls is just thirty or forty feet from the bridge, and is very pretty. The second and third falls are pretty evenly spaced, and are a few hundred feet upstream. It may be rather difficult to get a great view of the second and third falls up close, but I really didn’t explore that very much. I wanted to see The Cascades, but didn’t plan on spending a considerable amount of time there. There were other falls I planned on visiting. There are other falls beginning a mile or so upstream, at least that is what is shown on the map.

Where in the World is The Cascades?