The uppermost portion of Laughing Whitefish Falls in July 2008

Laughing Whitefish Falls is one of the taller waterfalls in the Upper Peninsula of Michigan. I’m a really bad judge of heights, but from other sources, it is about 100′ tall. That would definitely put it as the first or second tallest in the state. There are two parts to the falls, an initial, but short, vertical drop, followed by the much longer slide down. If this waterfall were in Pennsylvania or New York, it would have been surely called Buttermilk Falls, since this is one of the few waterfalls in the Upper Peninsula to have that “consistency.” Here in the Upper Peninsula, though, we have the interestingly named Laughing Whitefish Falls.

While not as widely known as Bond Falls or Tahquamenon Falls, it is still an impressive falls…impressive enough that it has its own scenic site set aside by the state. The hike to the falls is very enjoyable, though the drive down the dirt road to the parking area is pretty insane. I can’t recall many other dirt roads that have been more covered in potholes and deep grooves. I was actually concerned for my car. It’s a short way, though. Just go very slow!

After hiking to the falls, you will notice you are standing at the crest of the falls. You can take the numerous stairs down to the base of the falls, though the viewing platform could prevent you from further exploring the falls. Some people were slipping through the platform to get a better view. 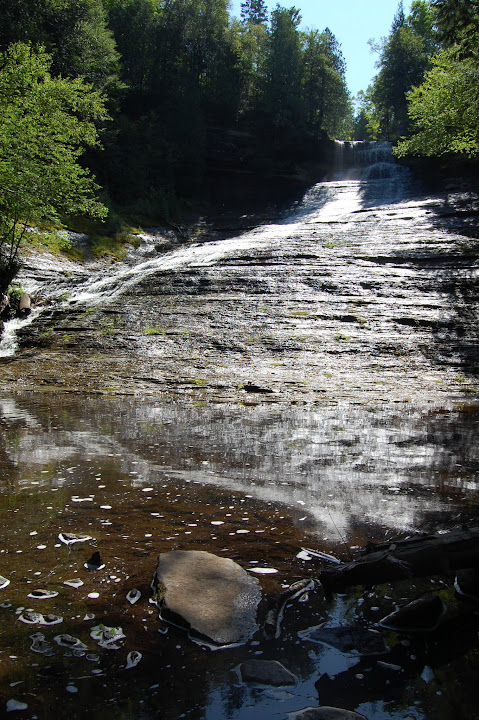 Where in the World is Laughing Whitefish Falls?