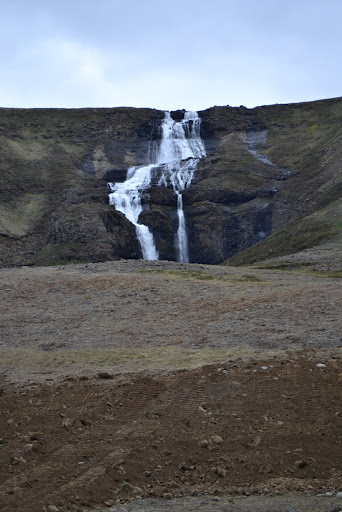 As I have said before, Iceland is a waterfall wonderland.  In my six days traveling around the island, there were no lack of waterfalls.  The total count of waterfalls just near the Ring Road was 34, and those were the waterfalls that I photographed.  There are hundreds on other untraveled paths, along with many in the remote interior of the island.

In the northeast portion of the island, there are a number of waterfalls that are directly visible from the road.  They are not popular enough, wide enough, or probably even tall enough to be clearly marked, but they are still very obvious.  It’s pretty impossible to miss them if you are driving by!  This is one of those waterfalls, which apparently disappears behind the rock.  I didn’t have much difficult stopping to photograph the falls.  As I’ve read elsewhere, some portions of the Ring Road see only 30 or 40 cars a day during certain times of the year.  It was probably busier in June, but I still was able to physically stop the car on the road and shoot away! (Waterfalls #1 and #2 can be found here.)

Where in the World is Ring Road Waterfall #3?