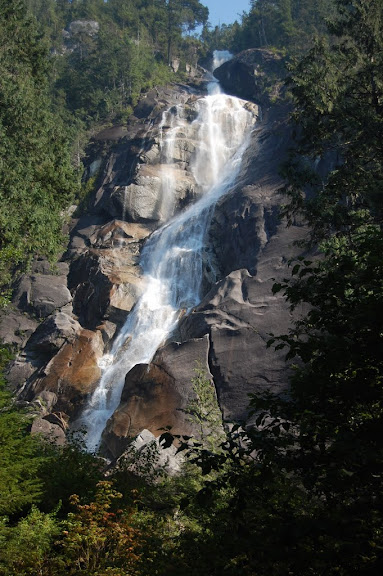 Shannon Falls just goes to show how deceiving waterfalls can be. Looking at pictures of the falls, it doesn’t look like an extremely tall waterfall, and yet Shannon Falls is actually one of the tallest waterfalls in British Columbia. At approximately 820′ tall, it’s a wildly impressive waterfall. Only when you’re standing near it do you begin to realize how small you are compared to this falls.

It’s a complex waterfall, and because of that, it can be somewhat difficult to photograph the whole falls. That is what likely makes it seem “shorter.” The lower portion of the falls is completely lost from view in the picture to the right. To get a better view of the lower portion of the falls, you sacrifice views of the upper portion. There are multiple different places to view the falls. A number of paths form what seemed like a loop that leads away from the falls and then comes back around near the base. The base of the falls allows for some exploring. Wedding photography was taking place near the falls when I visited, and I can’t deny that it was a really spectacular place to visit.

Where in the World is Shannon Falls?