After researching waterfalls in Northern Ireland, I was excited to go Glenariff Forest Park. There were a number of waterfalls in the park that looked like they could be great. So I became a little bit concerned when I discovered that the Giro d’Italia was going to be occurring, causing many road closures exactly in the areas I was going to be travelling! I understand that Ireland and Northern Ireland were very excited to be hosting the start of the race, but I had no idea this was happening and didn’t really understand what this meant for getting from point A to B in Northern Ireland.

I decided to start my journey early, and managed to avoid any road closures. My first stop was Gleno Falls just northwest of Belfast. I looked at the schedule, and realized I should have enough time to drive along the Coast Road (A2) before it shuts down. It’s a very beautiful (and curvy) drive, and passes through many charming towns. I was able to get to Glenariff Forest Park with time to spare. I went to the kiosk to pay the £4.50 entrance fee, only to realize it required coins (of which I had none). Luckily, there was a cafe/gift shop where I was able to pay the fee.

I then started my hike from the parking lot to the Waterfalls Trail. A few other trails also start and connect into this trail, though the trails are very well signed. You can wander around a bit, but the first major waterfall you’ll come to is Ess-Na-Larach. (There is another waterfall further upstream, but due to storm damage, it is currently inaccessible.) After this, you can continue hiking to Ess-Na-Crub, the other major waterfall. In between, though, is this smaller waterfall. There are other drops along the river, but this is the most significant of the “unnamed” drops. It’s approximately 8-10′ in height. With all of these amazing waterfalls, and the generally beautiful atmosphere, Glenariff Forest Park is really a great place to visit. (I say this remembering that it rained for a good 15 minutes as I walked back to my car. That just adds to the ambiance!)

Glenariff Forest Park is very easy to find, as it is just off A43 and is very clearly signed along the road.  The decision to make is whether you approach from the north or south.

After you turn onto the road entering into the park, you’ll drive along a one-way road for a portion, which leads directly into the parking area.  Then you follow the signs to the trailhead. 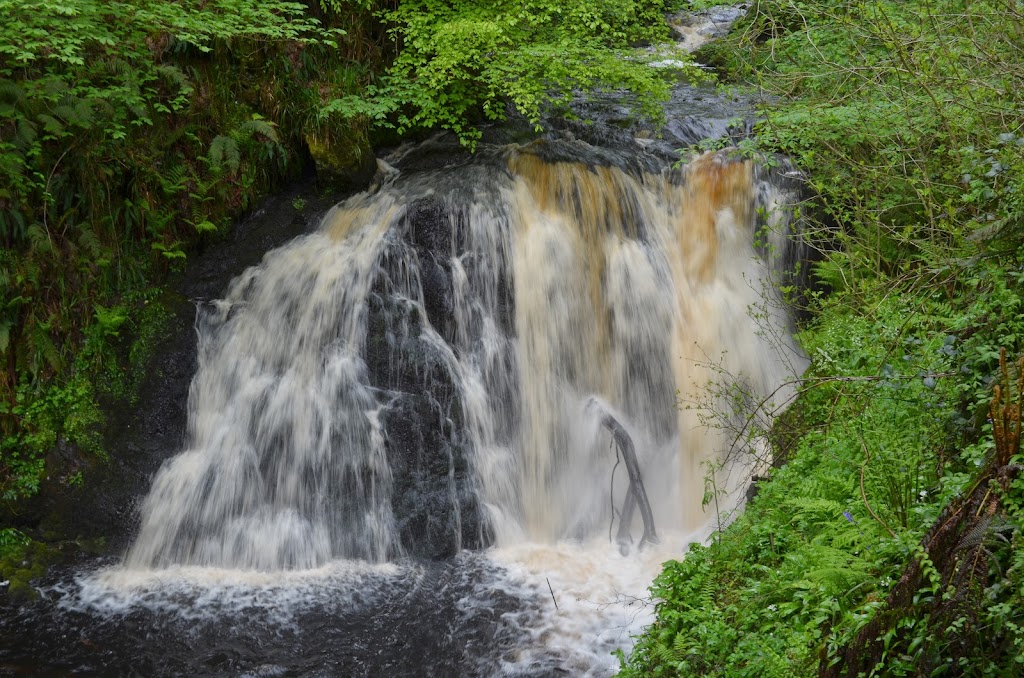 A smaller waterfall in Glenariff Forest Park (May 2014)

Where in the World is this Waterfall in Glenariff Forest Park?