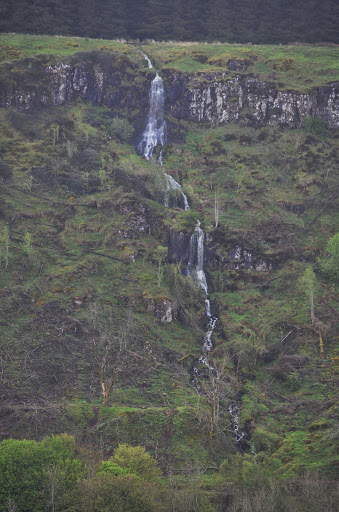 A waterfall near Glenariff Forest Park (May 2014)

There are a number of impressive waterfalls in Glenariff Forest Park, but there are also a number of interesting waterfalls near the park. As I was driving there, I noticed at least two waterfalls. These were tall waterfalls, each hundreds of feet tall. And yet there was no way to stop and view them. The road was very winding and I was trying to pay as much attention as possible to the road, since everything was on the “opposite” side!

So while I couldn’t stop and photograph these two falls I had seen, I was able to photograph a third waterfall from the parking area that leads to the other trails. From the parking area, I was looking east at forested cliffs, and noticed this waterfall. I’m a bad judge at height, but this is in the hundreds of feet range, since I’m relatively far away from it. I don’t know if this particular waterfall is extremely exciting, but it reminds me that there are often more waterfalls that nobody has ever mentioned, and that some of these are probably taller than the “tallest” we always hear about.

Glenariff Forest Park is very easy to find, as it is just off A43 and is very clearly signed along the road.  The decision to make is whether you approach from the north or south.

After you turn onto the road entering into the park, you’ll drive along a one-way road for a portion, which leads directly into the parking area.

Where in the World is this Waterfall near Glenariff Forest Park?